Why did we pick Phayo to go next? Because it seemed not so far from Chang Mai to the East, because it is by a big lake, not touristy and has a couple of handsome hotels between which it was had to decide…We wanted some real rest from Chang Mai’s noise and crowds and too much to do. But there are always some not so fancy features about traveling. The main rule is to take only the fastest bus. The slow ones are super slow and really not for us, spoiled people. So there were only two buses going to Phayo from Ch-Mￂﾠ -at 8 am and at 4:30pm. As we had to buy some presents in Ch-M still in the morning. we took the later bus and I hoped it will reach the destination before the sunset, but we came in pitch dark…There were traffic jams going out of the city, the bus started 1 later than it had to. all in allￂﾠ -it took us 3.5h to get there on winding hill roads, but not so pretty as one can expect. There were no taxis in the bus station, so good old GPS was helping us to reach the very center of the the town and the hotel – we were walking and dragging our bags, no problem. Until a nice young Thai couple decided to give us a ride. The hotel we pickedￂﾠ – Phunlong – is on the very very center on the bank of the lake, good location and a very fancy one. Such a room in West would cosl no less than $150-$200 pe rnight. maybe even $300 as some Dutch people mentioned. Here in Thailand the difference between a fancy hotel and a so so one is $20. Interesting. For those 2 nights I can sayￂﾠ – we splurged! We payed $45 per night with the fanciest breakfast buffet we ever got in Thailand and look at our room: 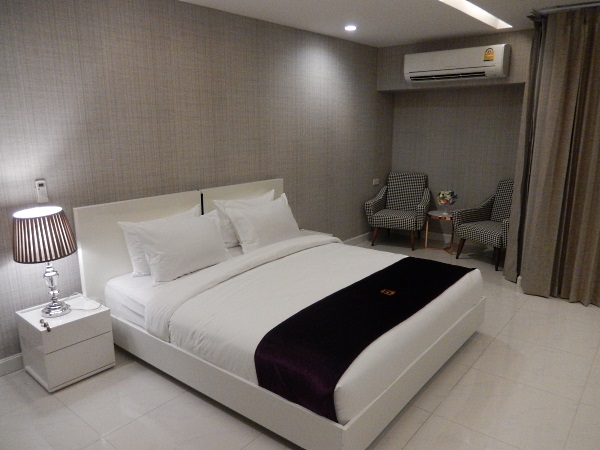 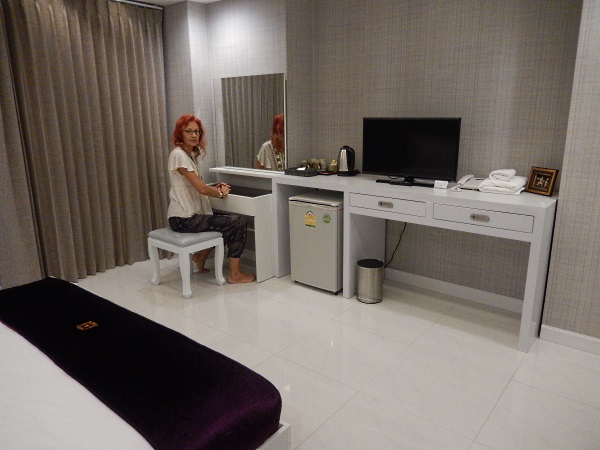 The bed was the softest one we ever experienced in Thailand, and the view from our balcony was like this: 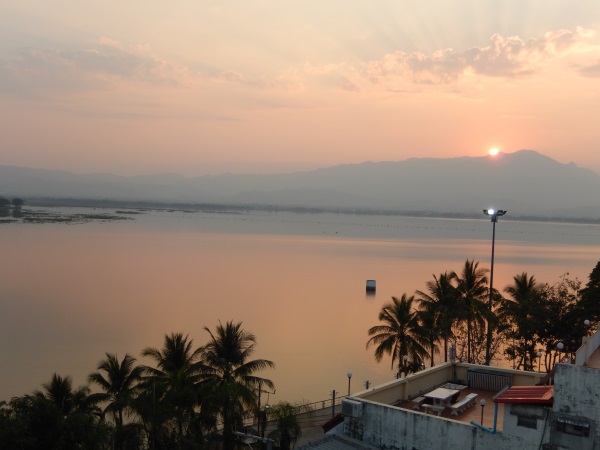 Yes, I was very sorry to have missed this sunset the first night. It was only the second evening we could enjoy it from everywhere – the room, the boat, the lakeside walk. The view to the other side of the lake-ￂﾠ there was a little island with a tiny temple on it: 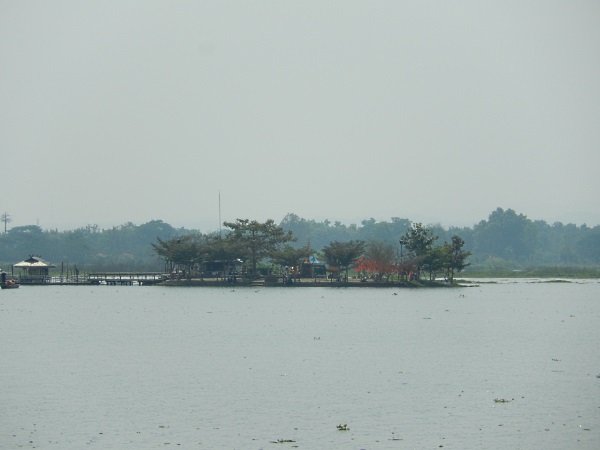 So we started the next day with a wonderful breakfast and then a usual long walk around the town, by the lake, enjoying bougainvilleas of which there was plenty!ￂﾠ 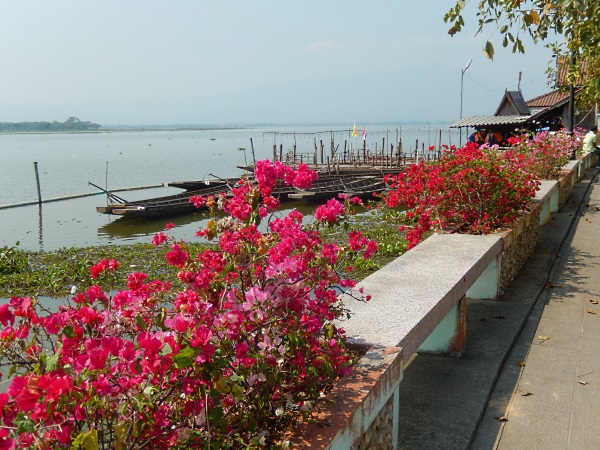 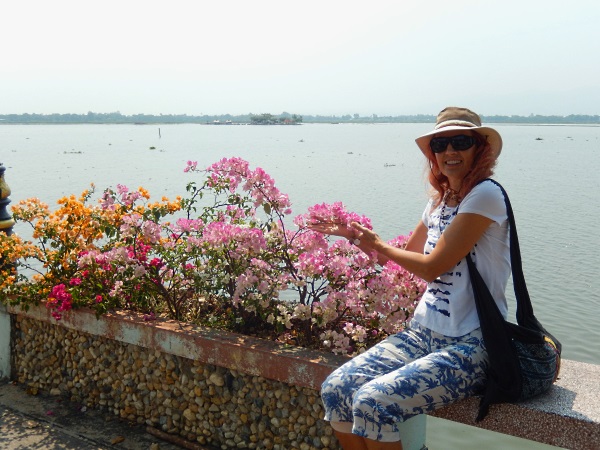 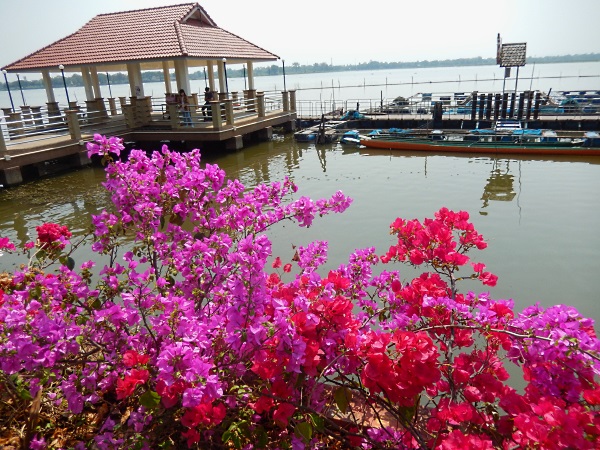 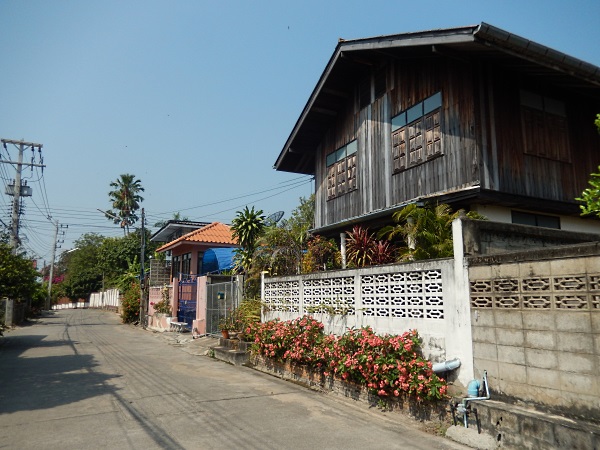 Here we found a nice B&B and i am holding its sign – if you do not want to splurge and pay 2 times less – i is a perfect place, we even checked the rooms. Super clean, and very close to the lake front.ￂﾠ 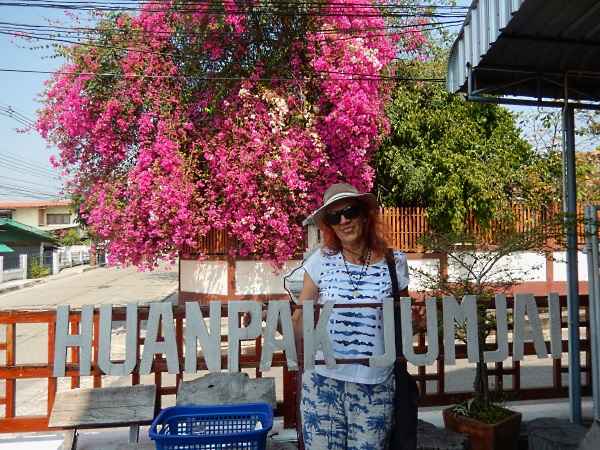 I lked this not overdecorated temple and a little sacred pig in front! 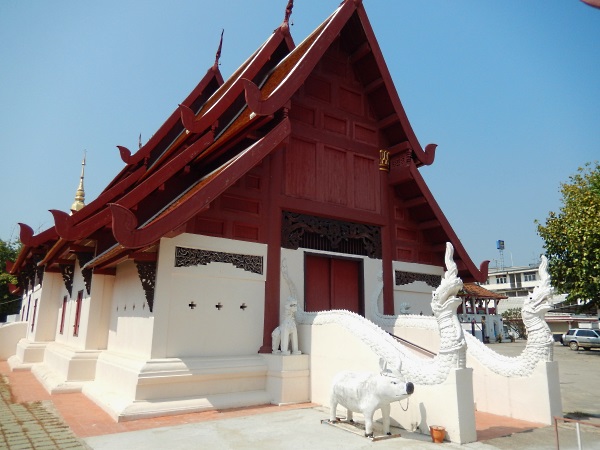 Boy how lusciously Crowns of Christ bloom there! 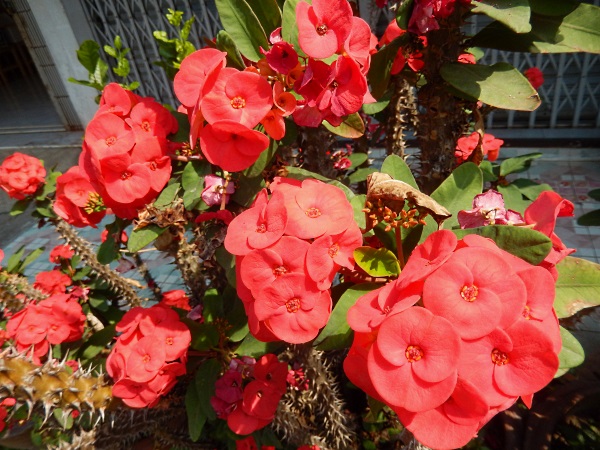 A Chinese temple-ￂﾠ they seem to have a pretty big Chinese population and live with them in peace – Chinese ran to Thailand after or during their Socialist Revolution: 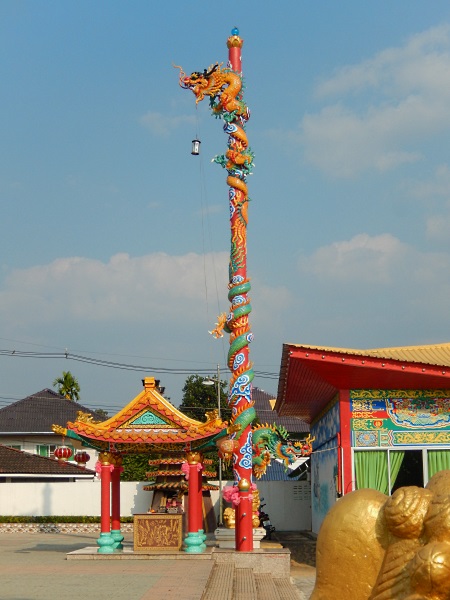 There is also a nice town park: 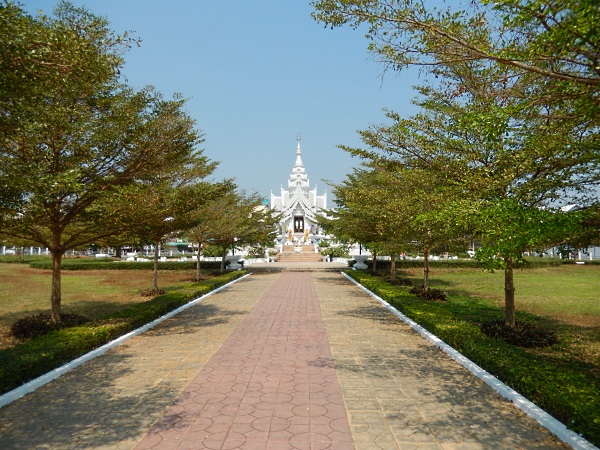 And temples being built: 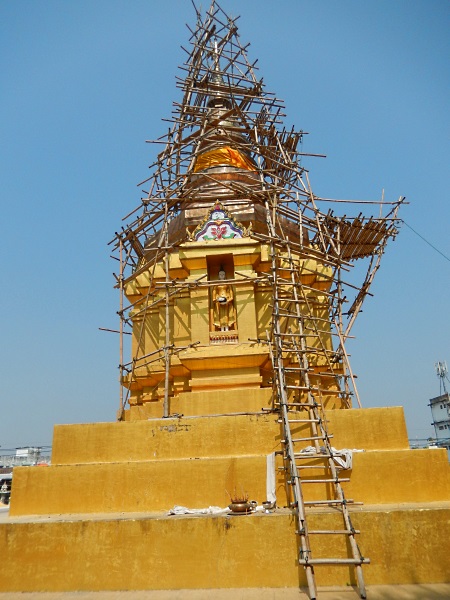 With creatures devouring each other: 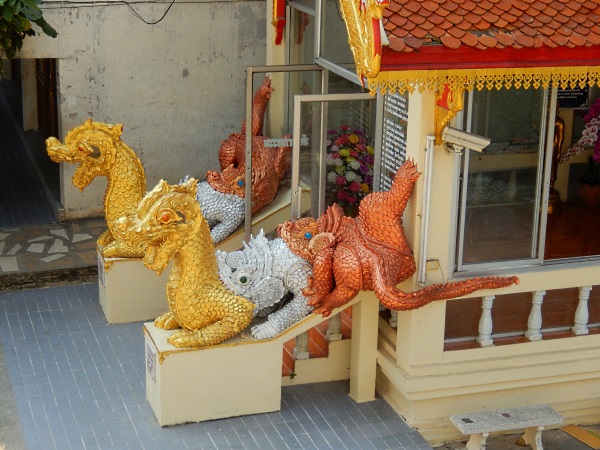 And a school yard under this big roofￂﾠ -what a good idea in a hot country! 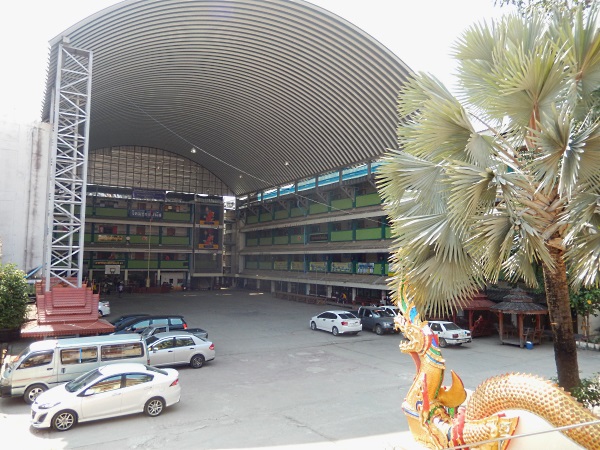 As it was enough of walking I took a boat to the little island, it was a fantastic quiet ride, with no wind, no motor, just a oar and a magic light surrounding us. See the little garden that monks tend on that islandￂﾠ -you can see cabbages, salads 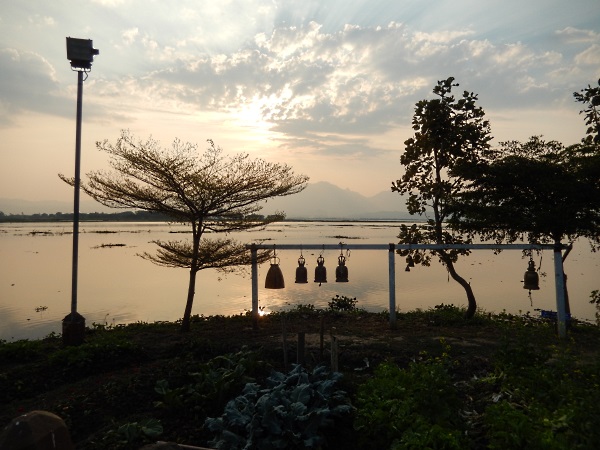 I guess the orange ribbons are for the wishes to be fulfilled. And I guess that the tree is magical: 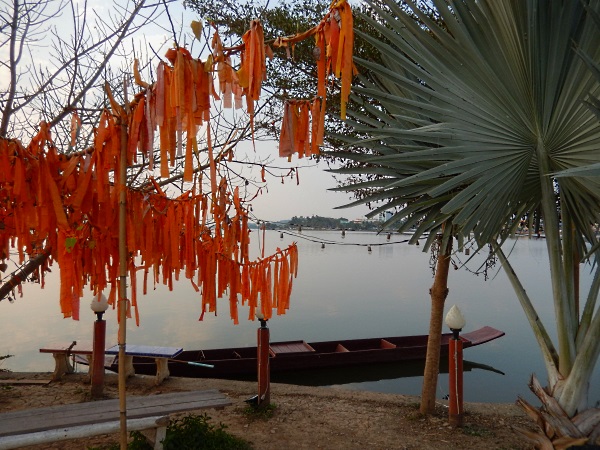 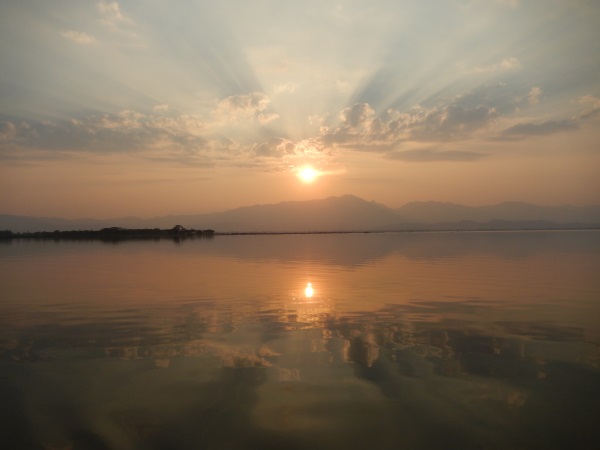 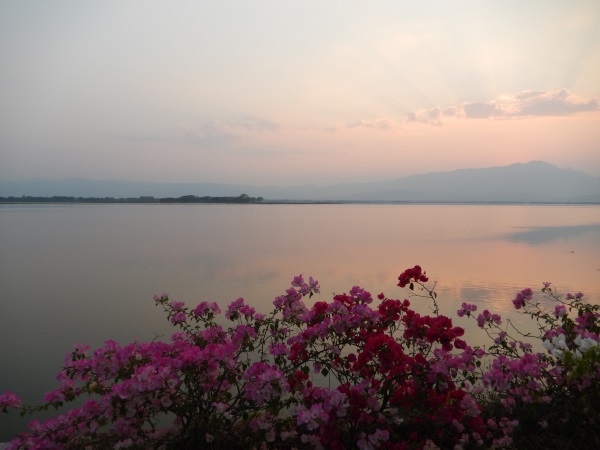 Hen after a short rest we again entered the night in town searching for food which was not as good as it was in Chang Mai…Maybe we didn’t find the right places. There were illuminations here and there, there were Chinese people doing Tai Chi and line dancing on the lake front -in totality – a very very pleasant atmosphere! 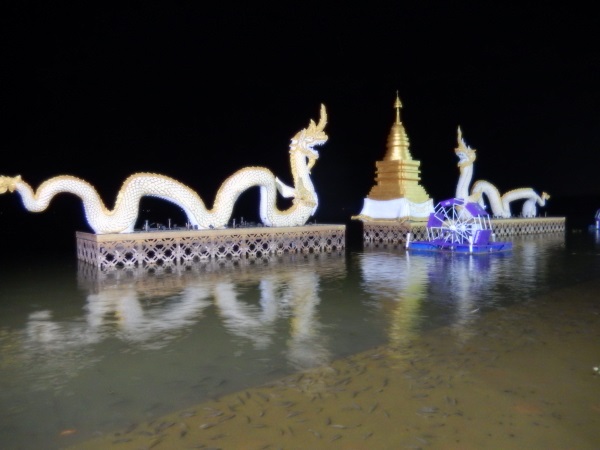 You can see a lot of fish in the water – we were amazed how many of there there were! they were staying by the surface of the water in the afternoon – maybe because the water gets too warm. Maybe they grasp for oxygenￂﾠ -it has to be said that the lake is an artificial one and very very shallow. And the water is very dirty…I was dreaming we will swim in the lake-ￂﾠ no way…But fish live there and fishermen are catching them in the dark. And everyone seems to be happy. 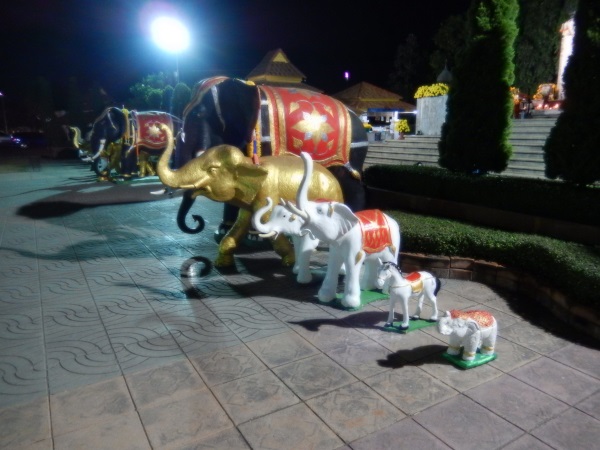 Only while leaving the hotel to go back to the bus station – I took this picture really fast…it is the tallest building in town – maybe some 9 stories high! wow! And looks like it doesn’t belong here :-). Like some giant cut a top from a hotel in Las Vegas and landed it here. There is another similar hotel, but a little further form the center and is better fit to those who drive a car. They have a nice swimming pool, I checked it and next time we are staying there! Renting a car and driving around the lake! But this time we had not enough time.ￂﾠ 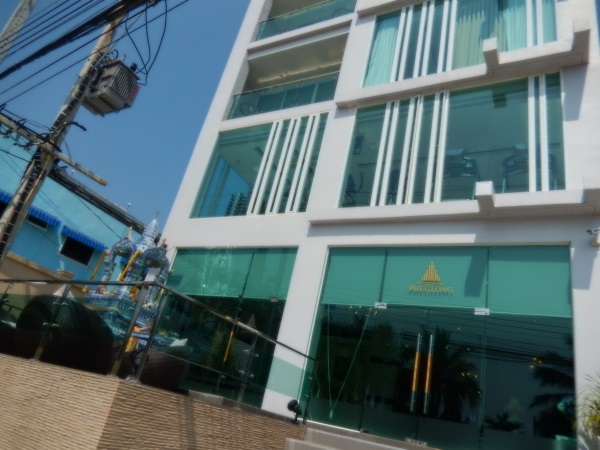