From Vicenza we took a train to Padova – 20 min trip only! 4.05e. Here we stayed at an apartment right by the train stationￂﾠ – it was called Loft Padova: a.viviani@archiworld.it, phone 39-3472-98812. This was a separate loft with a kitchen, bedroom and a sitting room, and also -with a lot of books! Art books, architecture books. Eloisa and Andrea run it and Andrea has his studio right by – so it is comfortable to come and not have him drive to let us into. I highly recommend to stay there! While it is not right in the center of the city and you can hear train doors closing and opening , but the apartment is very spacious, very pleasantly designed and decorated. We felt very comfortable. And the center is very close by foot. The reason we wanted to stay by the train station- we planned to go to Venice for a day from there. It was convenient. So the same evening we went for a walk, through the narrow streets of ghetto towards the biggest jewel of Padova – Basilica of St.Anthony:ￂﾠ 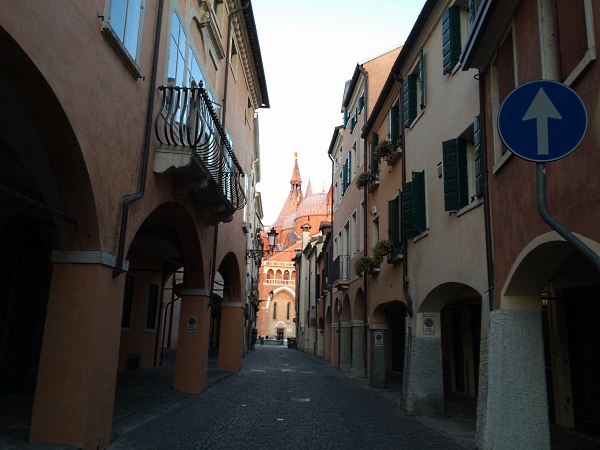 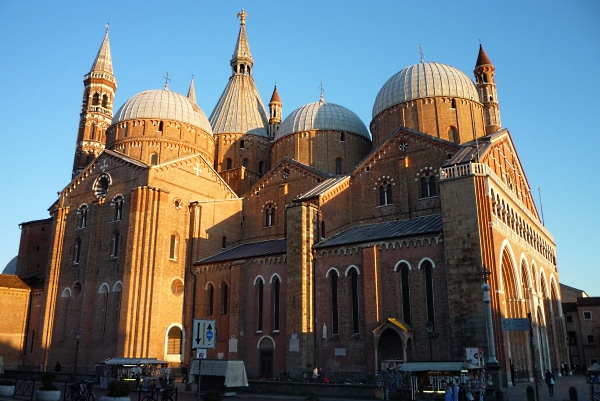 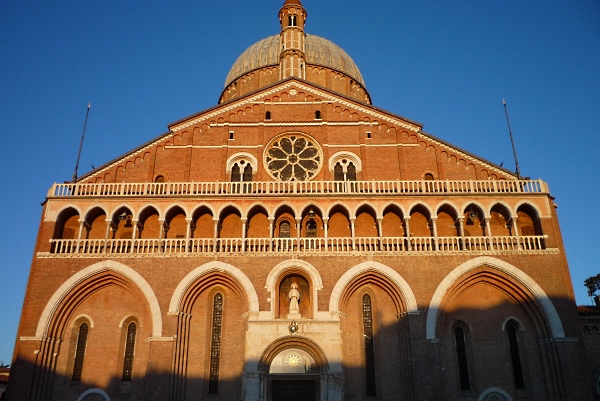 Creative Italians make such graffiti on the walls: 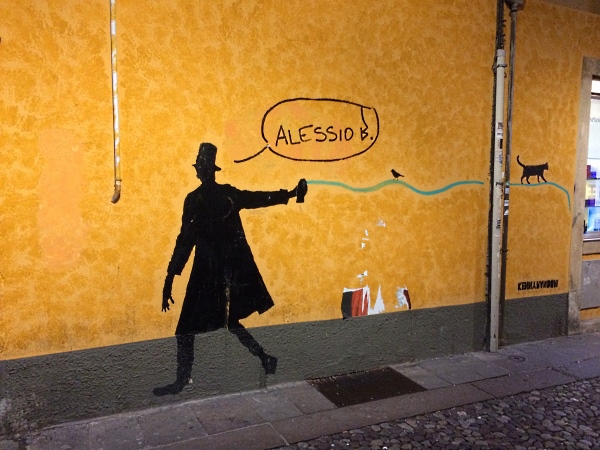 All the stores by that street had freshly brought mimosas: 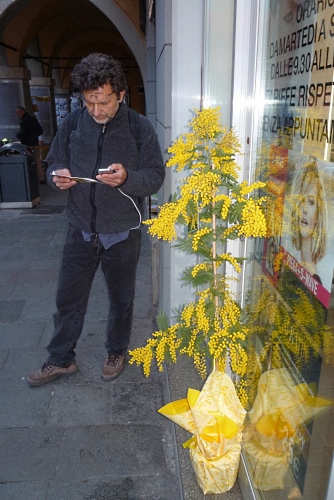 Again St.Anthony’s Basilica -a little later when the sun started to go down – the church turned into a flaming masterpiece of architecture. it very much reminded me of our mountains in Zion NP in Utah – the setting sun paints them in the same colors every evening for a very short time-ￂﾠ some 5-10 min.: 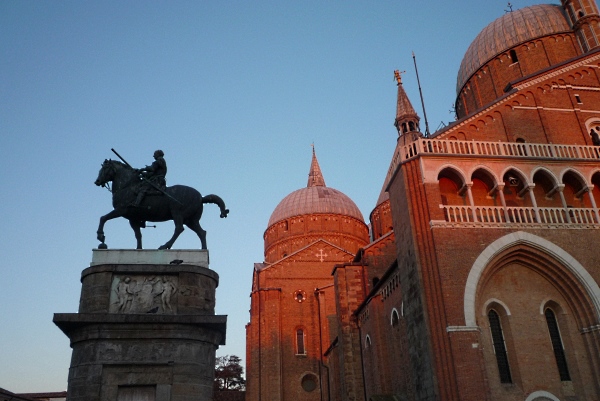 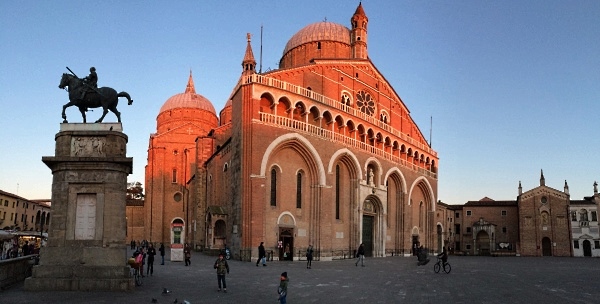 St.Anthony’s basilica holds the grave of St. Anthony. It is a big pilgrimage site and all visitors try to touch the grave and ask St. Anthony for favors. I did, too. While walking by the white marble grave you see at least some 8 extraordinary reliefs on marble with the scenes of St. Anthony performing his miracles. Here is one of them – I liked the peculiar face of one or major characters of the scene: 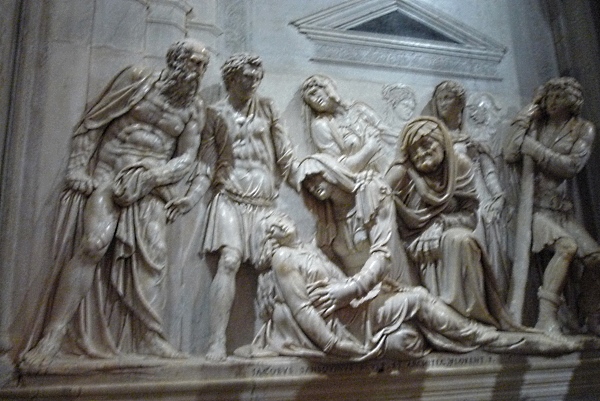 Padova is known for its second to the oldest University in Europe. At those times several liberal professors and students split from the University of Bologna and came here to establish a new and liberal educational facility in 1222! Galileo Galileo was the most prominent professor there. The first Anatomy Theater was built there in 1594 with a way to hide a dead body very fast in case the Inquisition was coming to check. but we didn’t visit the theater this time. neither the Aula Magna, just the corridors and the inner yards and one of the aulas. Students graduate in the university every day.ￂﾠ Traditionally they wear a wreath and are very happy surrounded with their happy families and friends, their pictures being taken: 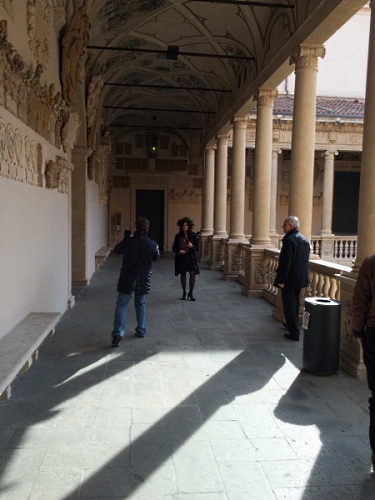 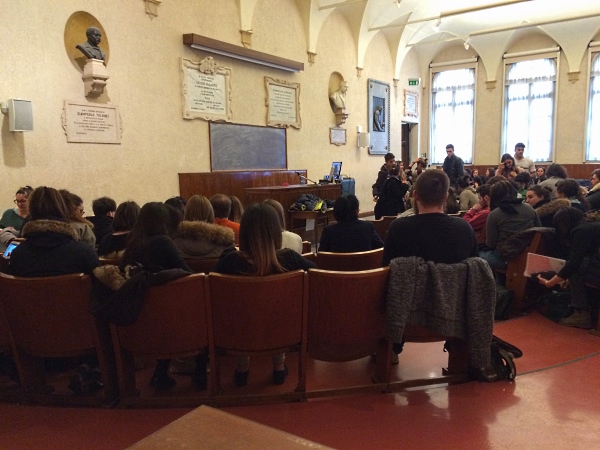 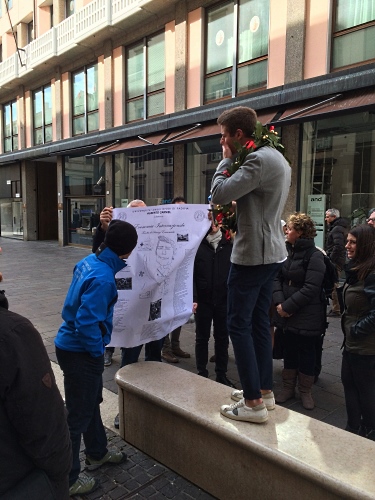 Their friends prepare for them some text, hopefully funny with pictures and caricatures – and the celebrated graduate has to read the texts loud and clearￂﾠ -fro everybody’s enjoyment. It is a pity not ours, we didn’t understand… 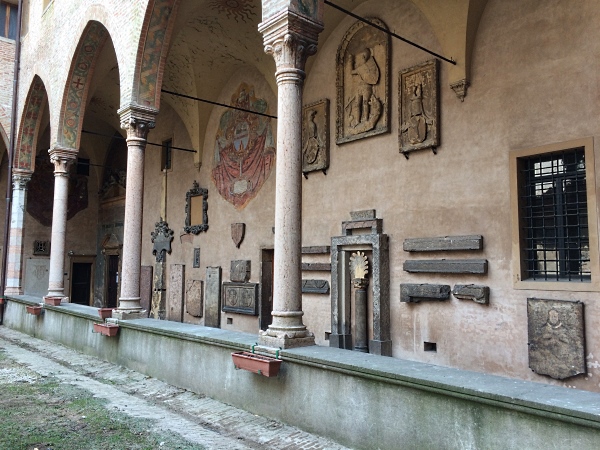 Across the street from the main university building is a very famous Cafe Pedrocchi built in 1831. Famous meeting place for scholars, it was a scene of student uprising in 1848. Now – a fancy restaurant in two of its rooms and a more regular down to earth cafe in one of them. Each of the three rooms are decorated in one of Italian flag colors: 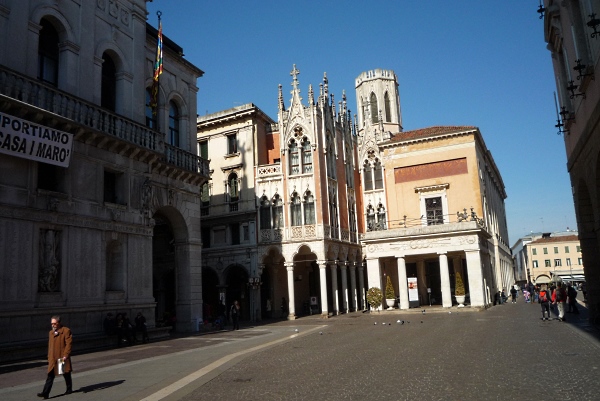 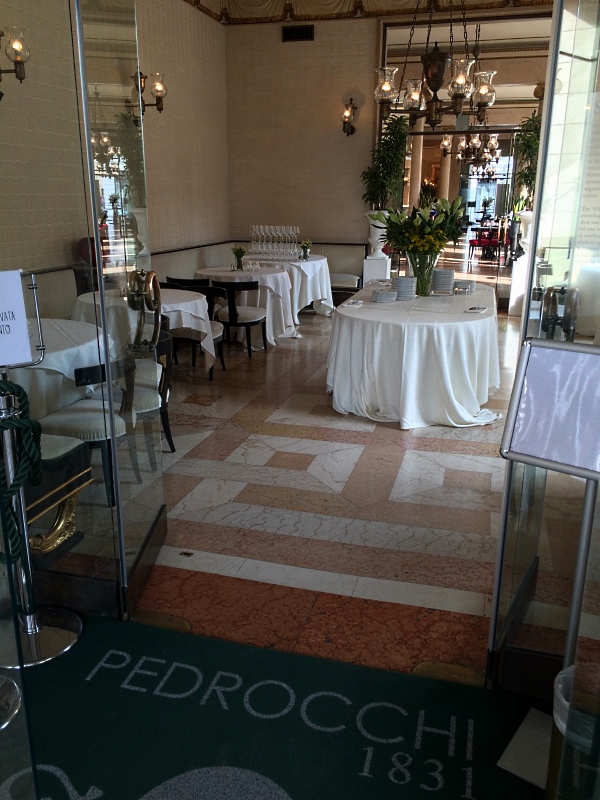 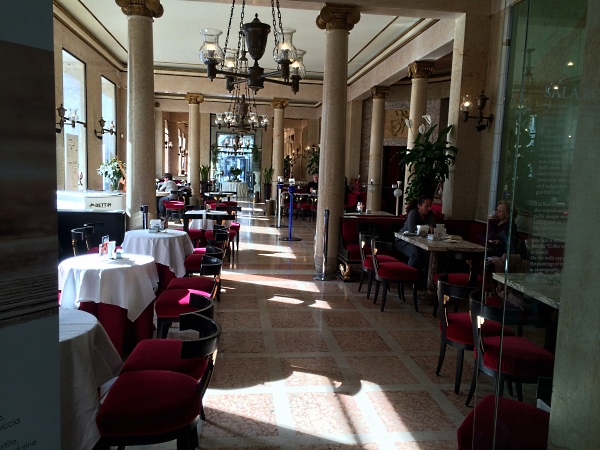 Else – I visited the very good art collection the Eremitani Town museum,ￂﾠ which is by an ancient Roman amphitheater. There in the park there is also a very famous Capella degli Scrovegni – all painted by Giotto in 1303-05. They try to preserve the frescoes and let in only a very limited number of people, and they do it in groups, so I was lucky that the tourist season hadn’t kicked in yet. The line was not too long. And it is very worth seeing the chapel. But no pictures were allowed, so be it. The magnolias were already starting to bloom: 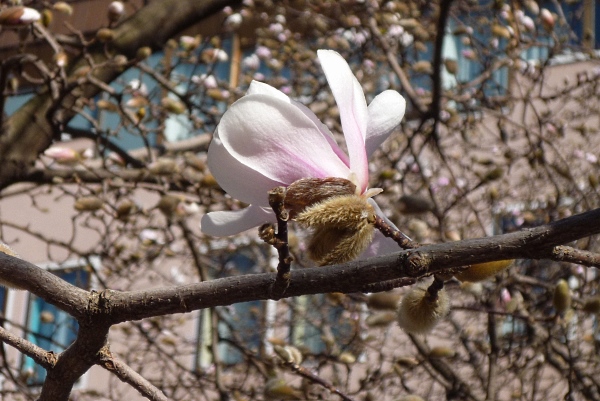 Besides other ruins left by ancient Romans there is their Forum, which is now turned into a very spacious park with fountains and an abundance of sculptures: 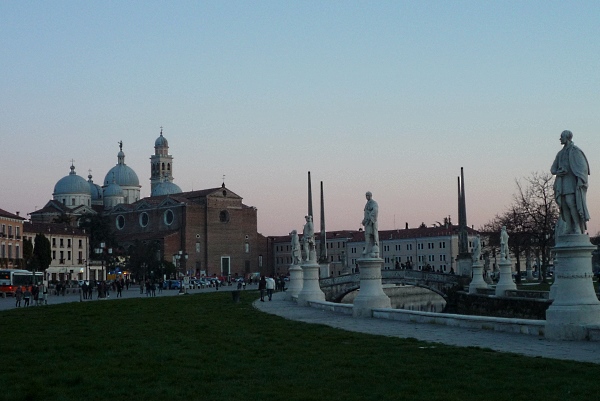 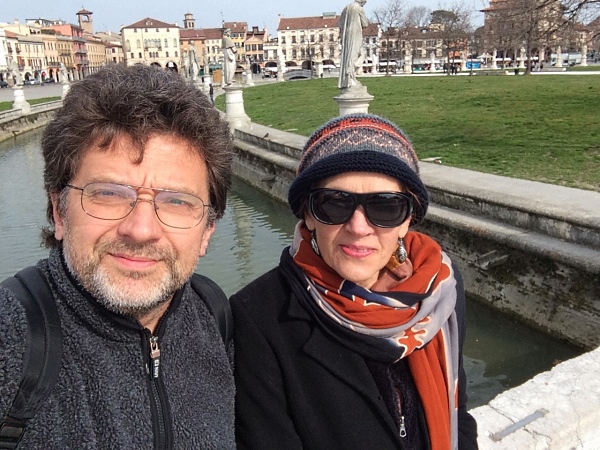 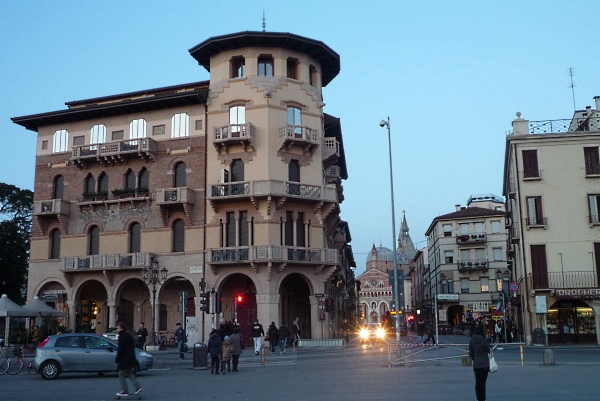 The central part of downtown has three joining squares, here is one of them: 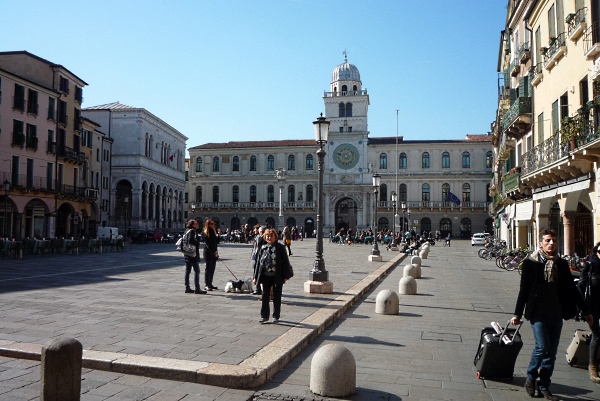 The cathedral doesn’t not look very big or impressive, but it has very outstanding frescoes in the Baptistery on the right: 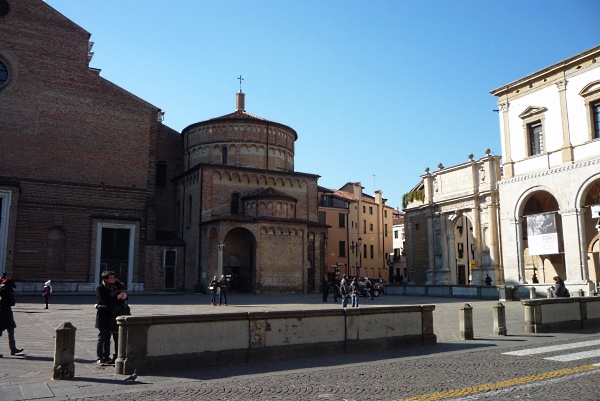 And again another view of St. Anthony’s in the morning and at night: 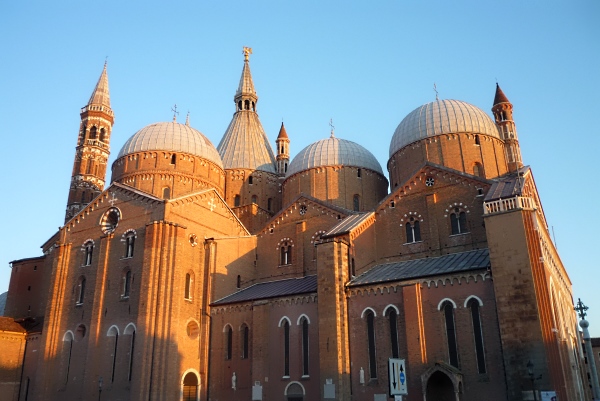 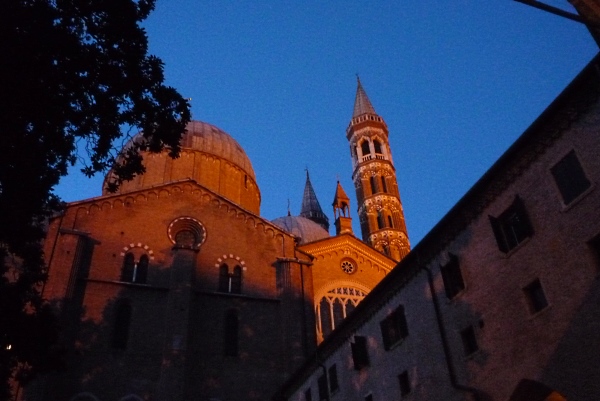 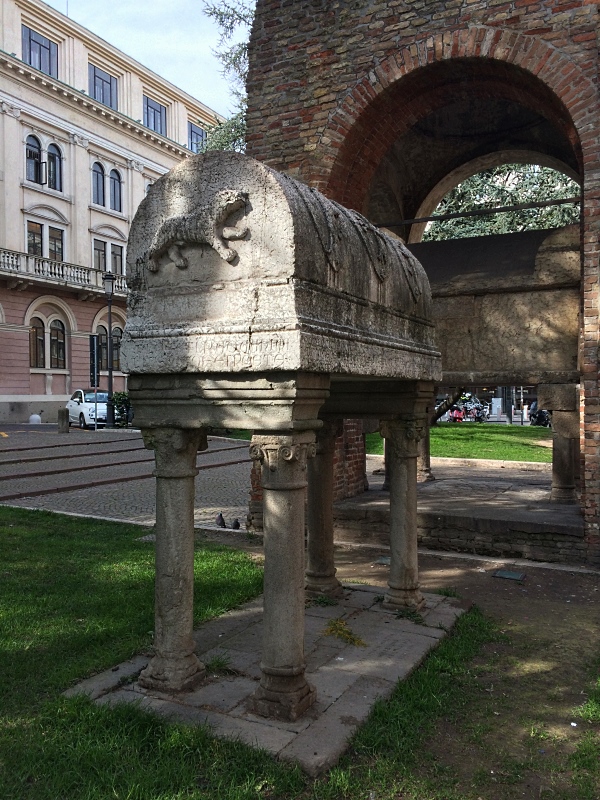