Because those three cities are so close together, we didn’t rush in the morning to Queretaro, but still enjoyed San Miguel a little, drove to Aurora, then to see the hot springs, which are within 15 km distance. More famous La Gruta is by the highway. but it is tricky to notice t. we had to turn around for several times until we got there – GPS was of no help :-). The price is 110 pesos and there are some pools and that famous tunnel with the light coming from its roof and making the “underground’ river very blue. But the grounds seems not so big as the Escondido ones. The latter was maybe a mile or two from the highway. almost the same exit, right by a drive to Shangri La – a fancy resort. Escondido is a big park with ponds and ponds and one filled with water lilies and a lotus! They also have a small under-roof tunnel, but it didn’t appeal to us much . The price was 120 pesos. And there were people enjoying the healing waters, no hope for solitude :-). But the main goal for us on that drive was to see the sanctuary of Atotonilco, a previous monastery, now just a church. (you don’t need a car to get there – a micro bus runs from San Miguel). It has an interesting story and is known for its amazing frescoes. Highly recommend! But I will show here only the paintings on its doors, that are especially appealing to me: 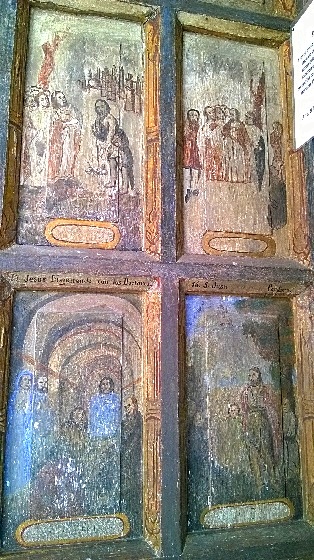 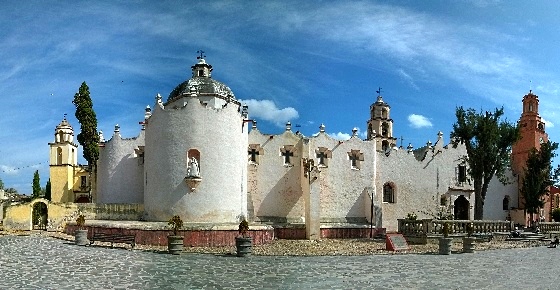 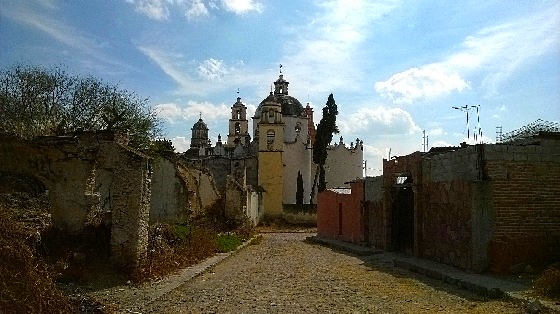 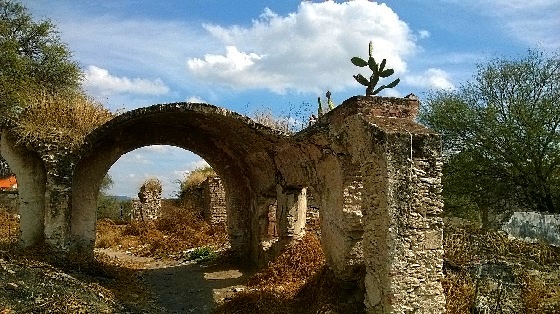 There is a perfect highway around San Miguel, we drove it on our way to Guanajuato. But no, our GPS lady set us through the center of town – through tiny streets, up steep hills, it was scary. Especially before joining the highway again – we are standing on a 60 degree angle by a busy highway and the “lady” screams to us – turn left! Sorry, we are not listening to you, “lady”, any more!

It is only 70 km to Queretaro. The drive was fine, but once we got to Queretaro – it is huge! – we again switched to GPS “lady” and again she betrayed us…She got us into small one way streets ways away from where we needed to go, and so we had to figure our where we were and “do it yourself” to the very center and to “our” the street 16 de Septembre. Luckily – there was a parking space in the street, close to the house or more exactly – to the gate. This time we also rented through Air B&B, her name is Grace Walker and she is also Feldencrais practitioner. It is her home, not a hotel, she just rents one room with a bathroom. A very comfortable one. The entrance is from the inner garden, as always. There was also the roof for sitting and looking – but the stairs run through her living quarters, so we didn’t use it: 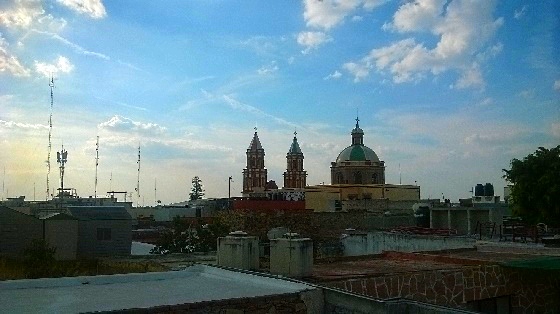 That same evening we went out for a walk and for a dinner, and enjoyed the lively city. It was the most elegant city we saw so far. As everywhere – lots of churches, but they looked a little different, especially this one: 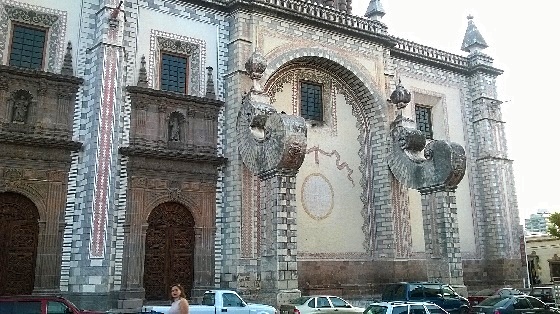 There were several sculptures, several colonial streets – as if like in San Miguel, but not at all: 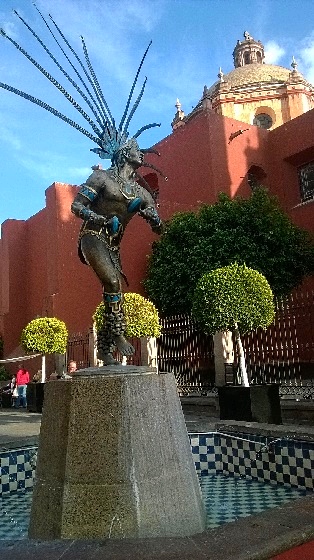 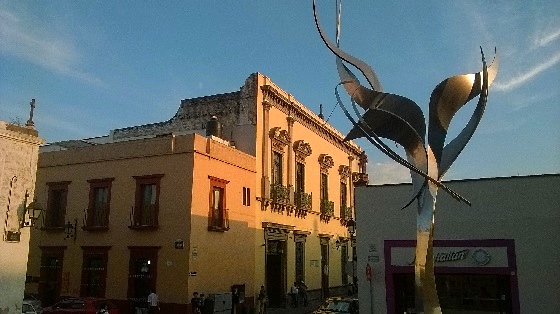 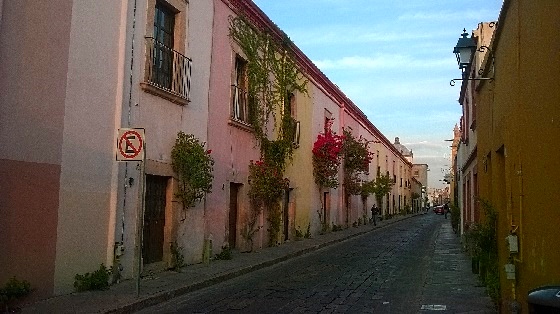 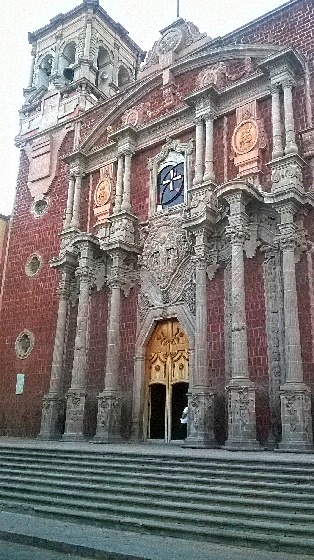 We passed several squares, with Christmas decorations( how without them?), though I would have wished there was none :-). Lots of colorful people, Natives and Spanish, all a very colorful crowd: 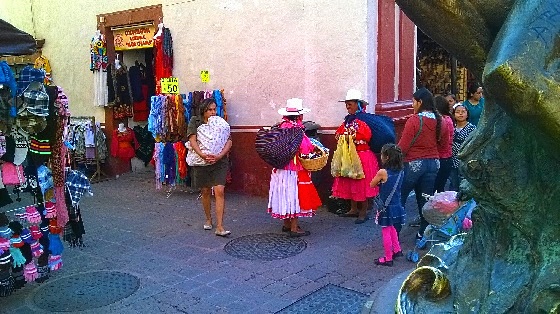 Creativity is on every step and emanates even from some plastic chairs : 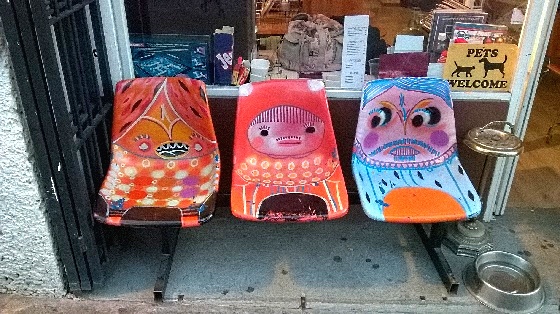 Lots of music here and there, and clowns doing their shows on available spaces. Not so many restaurants as in San Miguel, but enough. Not so many “pastes” shops as in Mexico city. But we found two :-). Only two. We used pastes for breakfast. And here is the ultimate picture of Queretaro – so I called it: 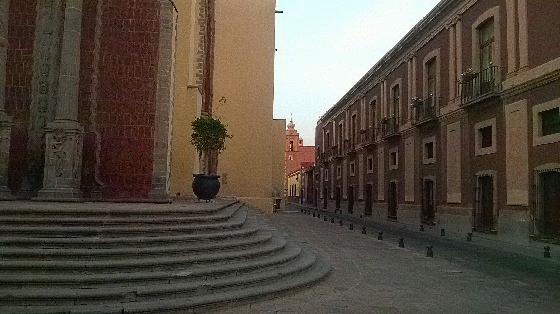 On our way we saw an interesting Theater – Cinema. There was an ad about an Expressive Dance concert tonight. So we tried to find out – where to buy tickets and are there still tickets left…No way, we couldn’t understand nothing whatsoever what they said to us – I even tried to show with my fingers and body that we want to come to the concert – will there be tickets?- I mean I played the scene, but they were turning their heads as if saying “no”…Maybe because I never studied drama. So we went home, rested a little and decided to go for a risk and come back to the theater just before the show – maybe someone can’t come and will sell us the tickets. But there was scarcely anybody. So we bought them and went in -very few people were waiting for the show to start – and then it started, it was something about wars or revolutions, they showed terrifying scenes from different wars and world miseries and then the movies ended and 5 girls danced very expressively, expressing pain and suffering, also friendship – the choreography was original, some movements not seen before, the girls were good, but it all lasted 20 min only. So we sat and waited for the second part – no more, that was it…Those other people in the hall were all friends and family of the girls :-). Well, another experience. On the way back we stopped in an exhibit opening – Poetica Urbana – but the artist was so modest, that I couldn’t see his name well and maybe I saw at some point or not – I forgot. He is a very good artist, quite different that the ones in the rich Aurora factory. In fact, I liked him so much that we spent a long time enjoying each painting and also the dashingly beautiful crowd of art lovers: 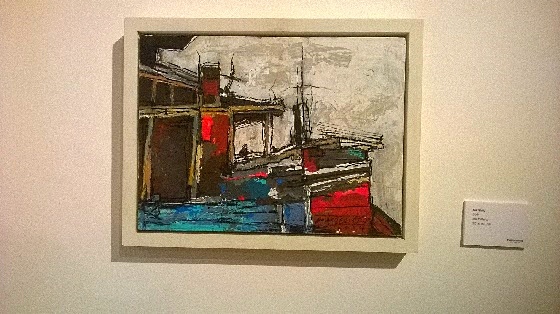 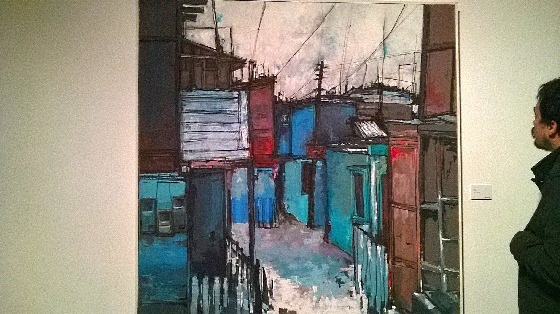 Queretaro has a totally different atmosphere that the previous two cities. Having spent so little time there maybe it is not fair to judge, but it seemed more of a real Mexican city with lots of high culture, not oriented towards tourists. But, their Art museum is not so impressive, the collection is small, only the building left a memory: 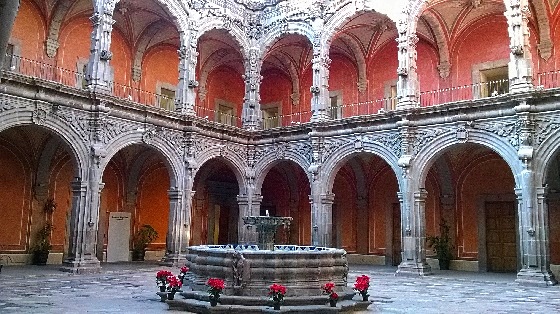 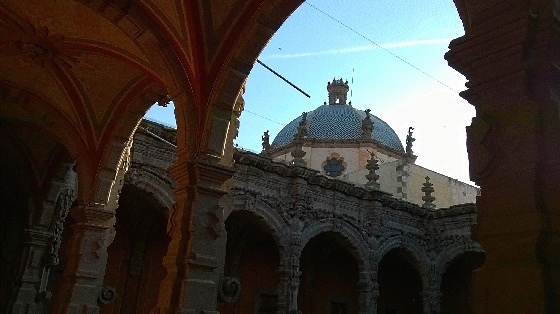 Close by there is an Art Garden – maybe they some events there, but besides this cute fountain -lady(the water feature was not on) there was nothing more, just a quiet garden. The top picture shows how small the lady is and looks very sad, as if some rape victim…: 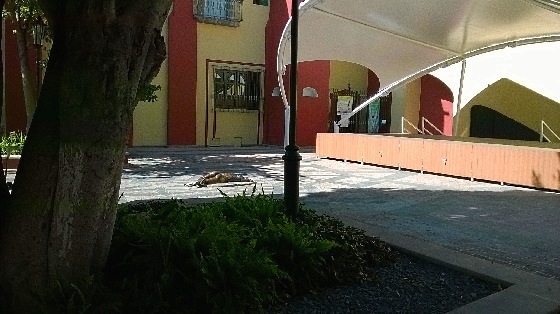 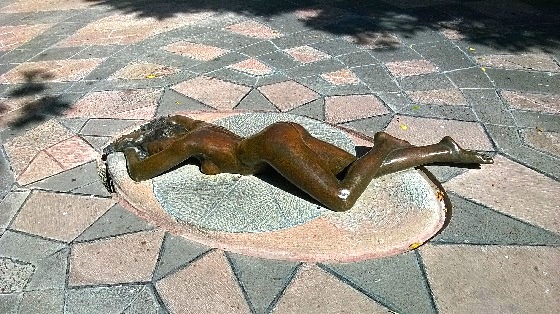 Then ther eis a big square and Church Santa Cruz -worth visiting. They have some nice restaurants, antique shops and a very good pastry shop – all on the left side of the square, if facing the church. Here are some views of the square: 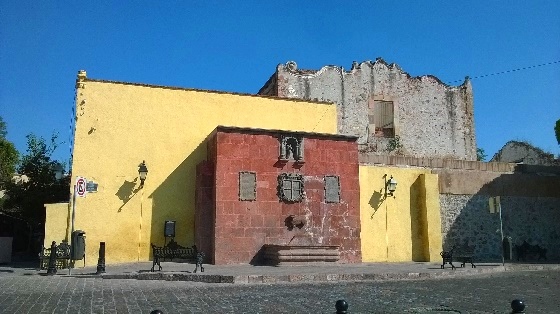 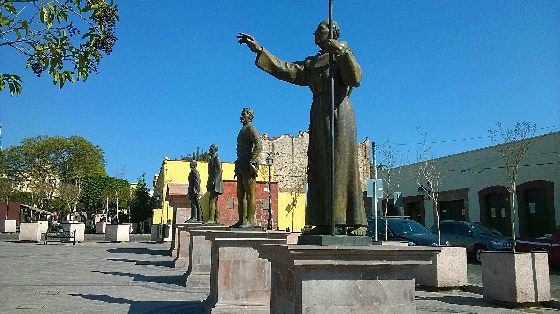 Behind the church the street was being fixed, but passable. You reach an edge of the plateau – and see the city stretching far far away, and especially – their famous historical aqua-viaduct, as if the longest in Americas: 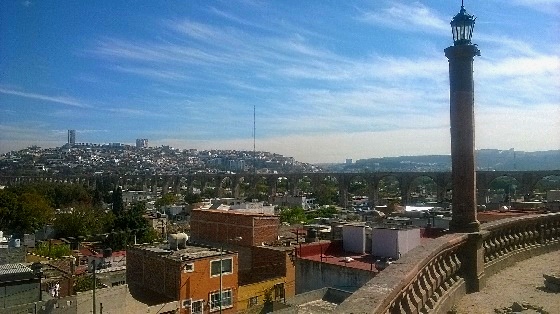 As I said – you walk behind the church and you see it like this with “poetic” lines -I woder who fixes them and do they understand what they are doing when they have to fix them: 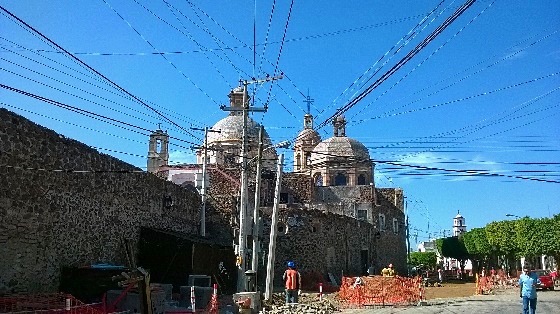 Here is their Pantheon with a little chapel and the sculptures of their main heroes: 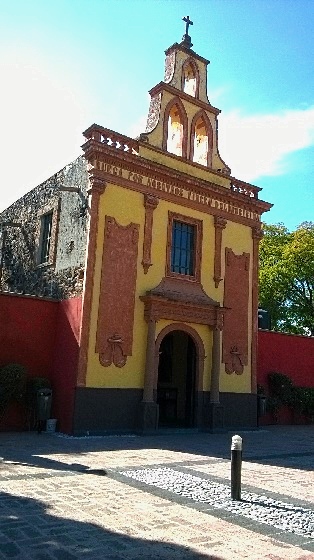 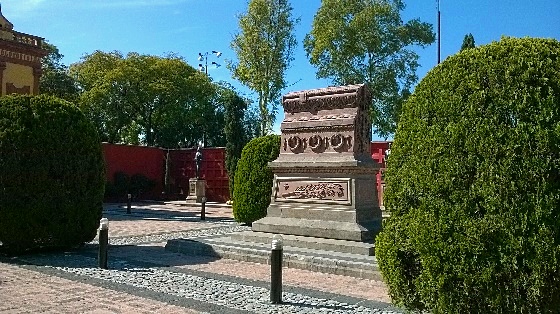 And here is one more decor on the streets: 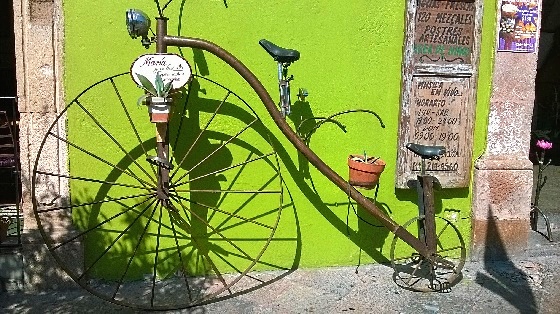