All things come to an end, we left Queretaro and headed again towards Tequisquapan, where we have already been. This time we were heading past T. to hot springs El Geiser – they are not by the main road. We had to turn right and drive 30 km on a small very desolate road, no cars or villages, just big cacti. Very big and impressive, and baren hills around, until we reached a valley and drove down into its bottom -to a resort , which was several hotels surrounding a pool area, all nice and comfy, and the only geyser in Mexico – harnessed into two pipes and throwing hot water and steam. The price to enter is 100 pesos and you can stay that day and the next morning: 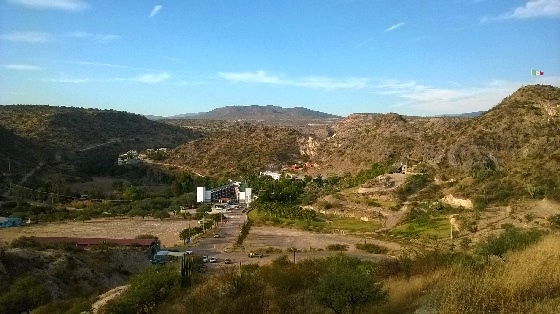 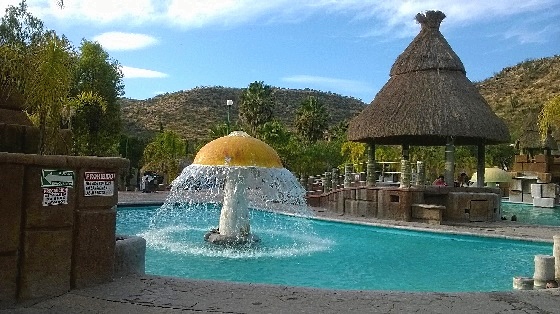 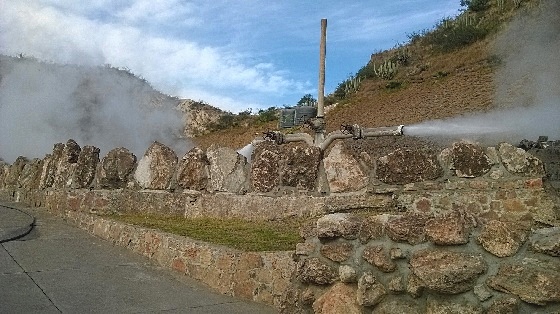 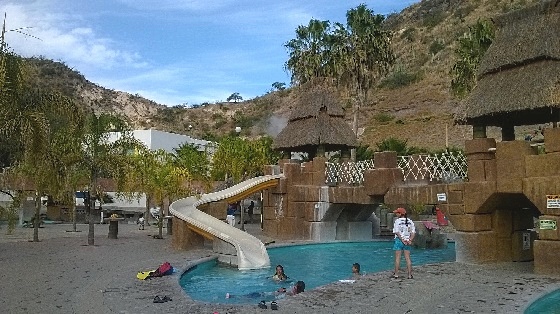 The spaces around warm pools were dotted with tents! That was peculiar. Lots of Mexican families come to have fun there, they bring their foods and are permitted to put a tent for the night.They seemed to be very neat and tidy!:

It is nice to see places in Mexico where locals are having fun and spending their vacations or weekends. Versus Gringos…as is by the sea where we went last time. I spent quite a while with them in the Geyser steam and enjoyed their companionship. Their kids were behaving rather well. The steam from the geyser comes in portions – it’s stronger shoot is followed by a weaker one, and you have to go back and forth while trying to keep the heat constant. If you go away from the steam – it gets cold in the air, if you stay deeper in the chambers built for that reason – you can get too hot, dangerous. The steam smelled sulfur a little, amazing! 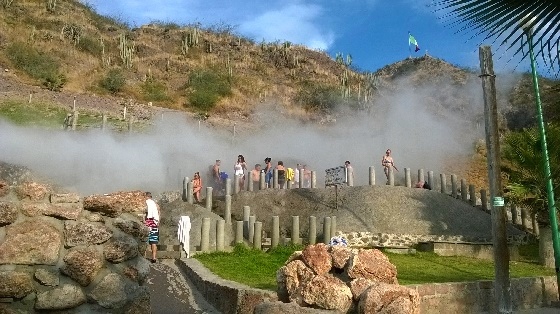 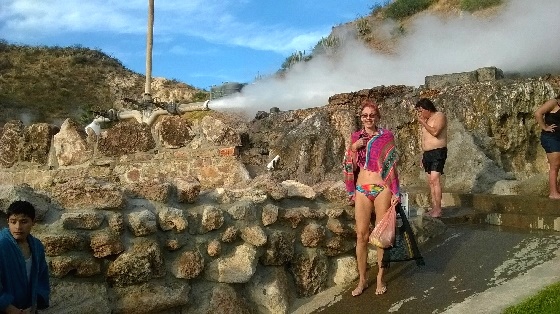 After getting clean and healthy we drove app. 12 km to Tecozautla – a small town in that area, far from main roads. The hotel Aquazul we stayed at was new , spacious, but lacked furniture to put stuff on. Maybe because it was new. But that was not a problem. The problem was a dog behind our windows who was barking at night for maybe 2 hours straight…it is a sad story about dogs in Mexico. You see little Chihuahuas beloved and dressed up, and you see packs of breed dogs running with their stomachs empty and you see many dogs tied on ropes. This was the case in the yard by the hotel – a nice bulldog tied to a shot rope, how sad and desperate he gets. No one seemed to care about him…Tecozautla itself had a downtown, with a couple of restaurants and a couple of churches: 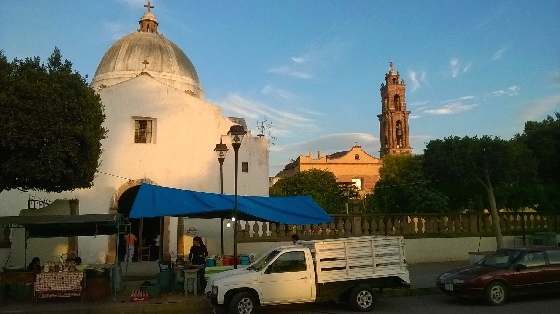 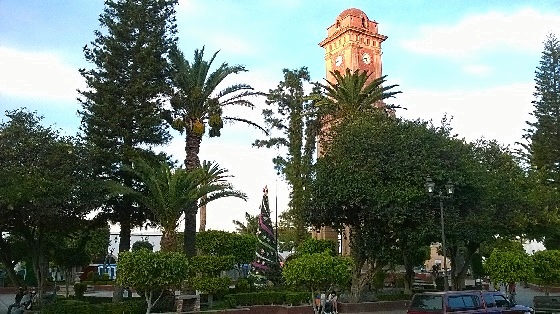 and a dancing doctor, advertising maybe the services of a doctor, we were not sure: 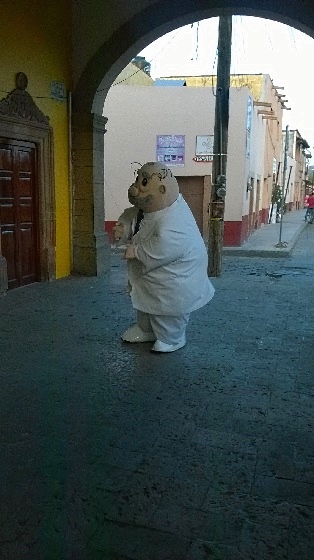 But all in all – it is better to stay in one of the hotels by El Geiser and not drive to this town at all. Better not to take the road we took the next day to cut through faster towards Ixmilquiapan. First of all – it was very hard to find the road out of Tecozautla- GPS was confused and sent us to a dirt road and then to dead end. We tried to figure out by just going south and trying roads and we found even like a state park – a sanctuary of their flora: 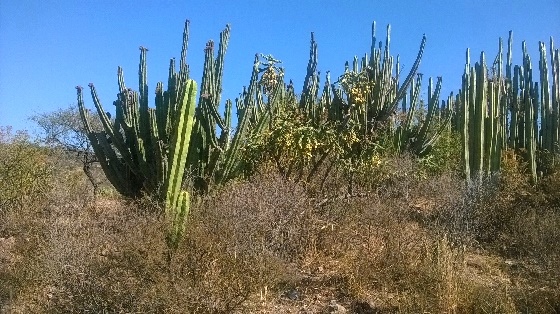 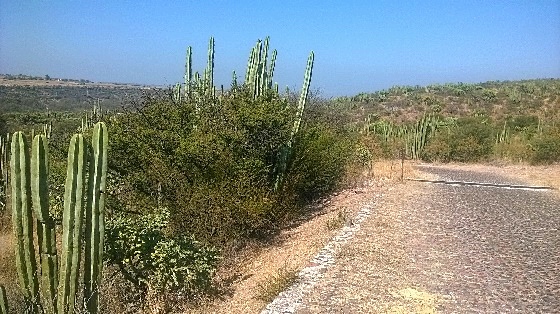 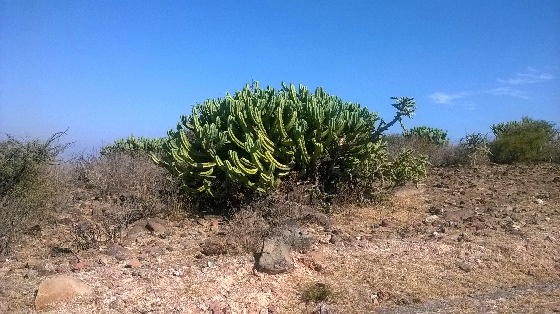 Most part of that road was cobbled stones…There was a part where we were not sure if we manage to pass, needless to say there we no other cars on it and we felt scared. It took us 1 h to drive 26 km without stopping – I didn’t feel safe enough to stop and walk around which would be wonderful among those cacti! At last we saw some villages which meant we were close to the main road: 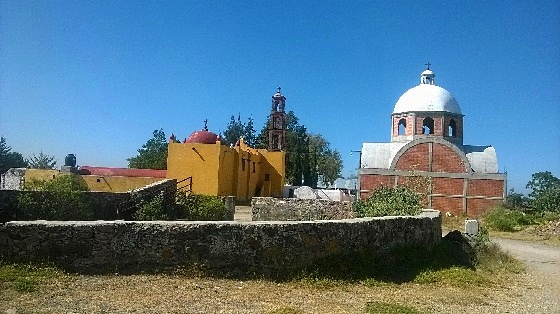 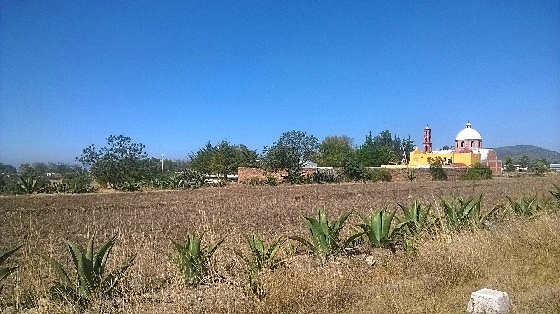 Speaking about agave -they are big, and sometimes them , sometimes cacti are used as fences. And the product they make from them – is really cheap :-). But we didn’t see any drunk people while there…

Driving on a main road towards and past Ixmilquiapan was much easier. but the road is not tolled, which basically means that there are intersections and ‘topes” all along and you can’t have any speed. Worth mentioning that there are many Hot Springs along that road – Balnearios as they call in Spanish – on the north side of Ixm. But we had no time for them. Or next stop was Actopan – a town known for its big church and monastery. The church itself was nothing very special: 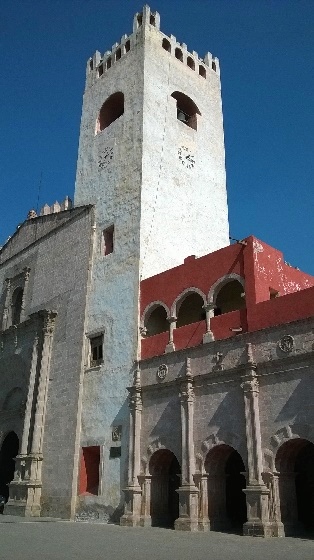 but by the side of it there was a big arch – and the frescoes on it were amazing! 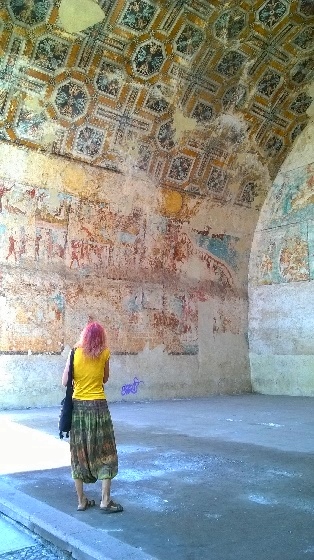 Here you can see Adam and Eve by a tree with the serpent, and the scenes of expulsion: 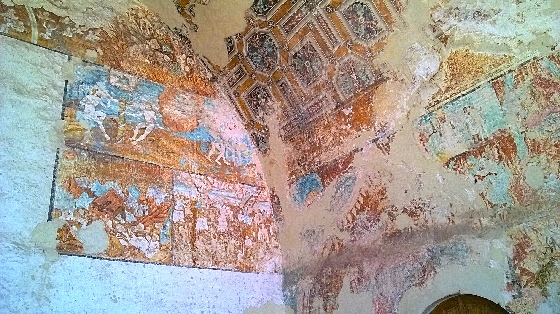 After the short visit we again hit the road and drove to Pachuca, a mining area center and the capital of Hidalgo state: 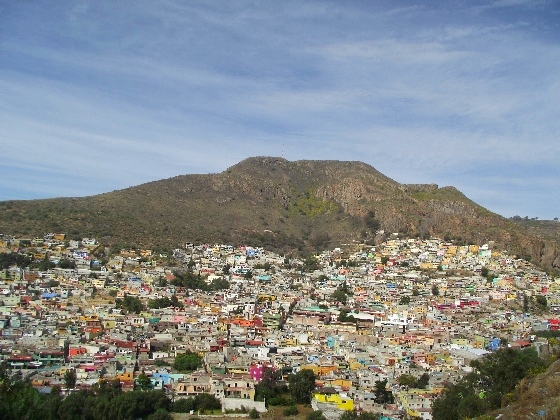 It is a big city, lots of traffic to get into the center and after working on our patience a lot to get through, we lost the battle and stopped in the nearest spot we managed to park. It was a block form the central square which has a Clock tower built by Big Ben builders: 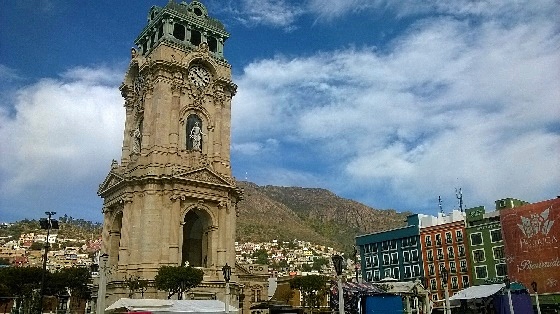 High above all buildings we saw a sign Hotel de los Banos – and went to see if they really have toilets :-). Because up till now on our trip “banos”ment “toilets”. While we checked it we figured out it is good enough for us and stayed the night. Just were too late to eat in their buffet – it seemed good , lots of happy people eating in the lobby, but we took care of the car first and were late. The good thing about Pachuca was that there was a Huapango dance festival. A [picture of dancers wouldn’t play any role, you’d have to see the dancers! I guess there was some sort of competition. there were judges and maybe three musical groups, because one would get too exhausted to sing and play for two days non stop! The dancers were some very young, some older, different groups and from different regions – based on the girl’s hairdo. Some had very long braids, some had no braids but hair all wrapped around their colorful “head-bagel”. All very colorful and very seriously trying to do their best. When you think – it was only one dance, but the audience was sitting like glued to their chairs for hours1 I was watching on and off for 8 hours – it didn’t end…I wanted to see who won, but had to resort to rest before they declared. the dance is very elaborate- it has two parts- one is slow and dancers walk or turn around each other sometimes with their noses touching. Then there is that very fast part when they they work very hard and fast with their feet, beating the floor and the rhythm is amazing! It can get you into a trance! They hit he floor so hard. that at some point the venue was stopped to change part of the floors, they broke the boards! The girls mostly were very colorful and their clothes were nice and national, but their make up…it was so much too much – especially the kid-girls. Their eyelashes were freaking long, their eye shadows were shining and bright colors from far away -that I haven’t seen before – like on some “super dolls”. But I hope they will learn :-).

So in between watching a walked a little in Pachuca, was not mesmerized by it as in other places we visited, but there were still spots of creativity: 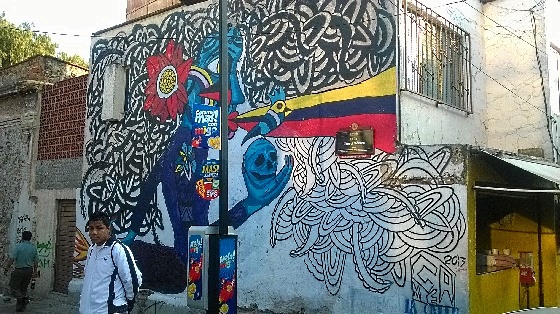 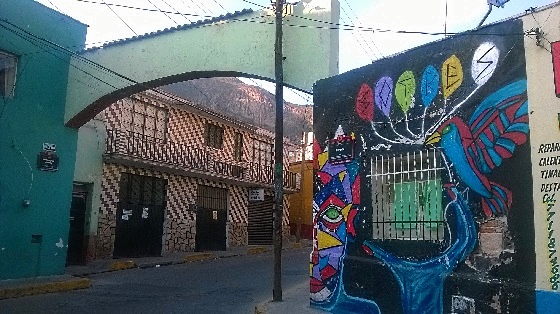 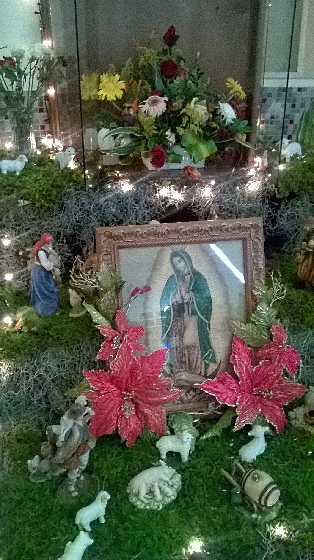 The last one is the nativity scene in our hotel – isn’t cute- baby Jesus is still not there, it was before Christmas, and a pig with a bunch of piglets sucking here in the fore front . Those Mexicans’ – they never stopped amusing me! Even in details :-).

The next morning the traffic jams were gone and after seeing the Mining museum in Pachuca (it is good and is the first museum I saw chemical formulas written under each mineral they had mined there) we drove up the mountains to see Mineral del Monte – or Real del Monte – it has two names. Books were recommending to see it- it is known not only for its mining past but also a Cornish community – they came all the way from England to work in the mines and introduced “Pastes” -baked cakes with different fillings, and Football. The real football game, when a ball is kicked with feet only, not this very strange fighting thing American socker. And from then on Mexico is having really good football teams. Not only that – I stopped to see what is there in a Museum of Pastes -the lady explained that once you enter – you make your own paste and while waiting for it to bake- you walk om an excursion about how its history here was, but the excursion was in Spanish…So I didn’t go. Just saw a big picture of Prince Charles and Camilla making pastes- evidently they visited this corner of Mexico just several weeks ago and visited the museum! I think it is peculiar that they visit places somehow connected to England – of all the places they have opportunities to visit. Somehow we didn’t take too many pictures of Mineral del Monte. I bet we were already tired of intensive sightseeing. So here is one: 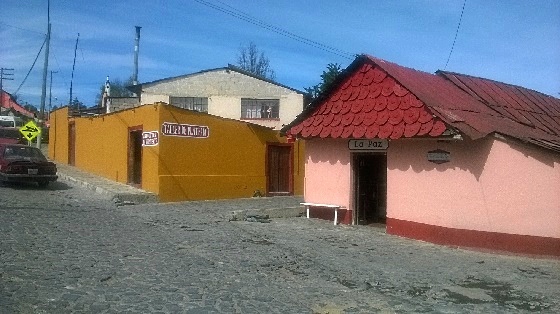 One more post is left – it will be about Teotichuacan -the Pyramids!