Years ago we read about Chaco culture, saw a movie about Chaco canyon and the historical park there. It was in the back of our minds to drive and see it, all shrouded in mysteries. At last we found a chance to fulfill the dream. My neighbor Sharon Hatfield is literally mesmerized by that canyon, she has read everything and done the trails there several times each.So we felt that for the beginners we will spend at least a day there. On the other hand – December is not the best month to go on trips – the days are short, one can get into winter storms, not recommendable… We left on December 2nd – it was still warm and nice here. much colder towards New Mexico. First stop – Toadstools, past Page: 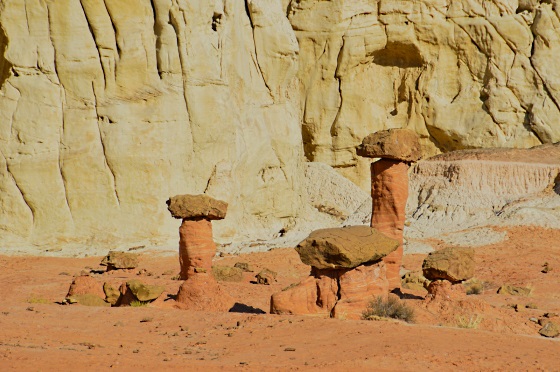 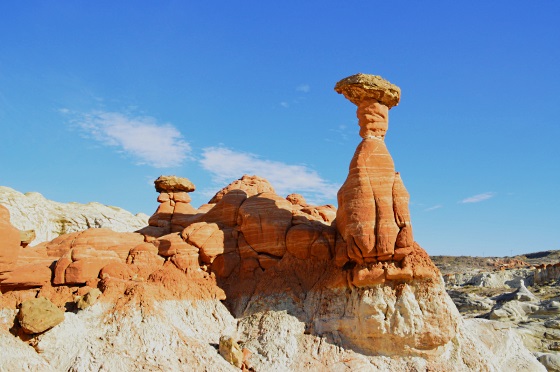 Then we started seeing snow…the first one this year: 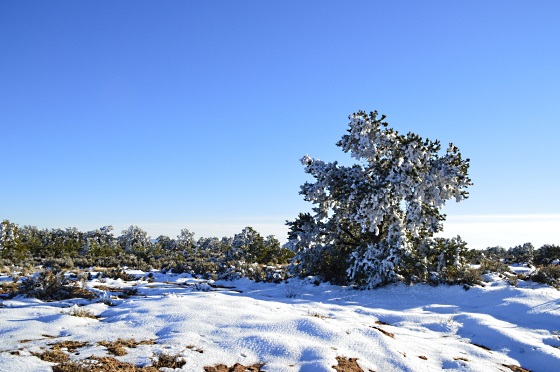 We were driving towards Farmington, NM, and the sun was setting while we approached Monument valley – so we turned to the side and drove for a while till we could “catch” this beautiful rock: 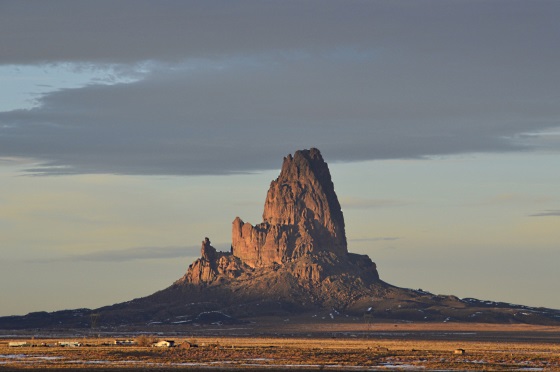 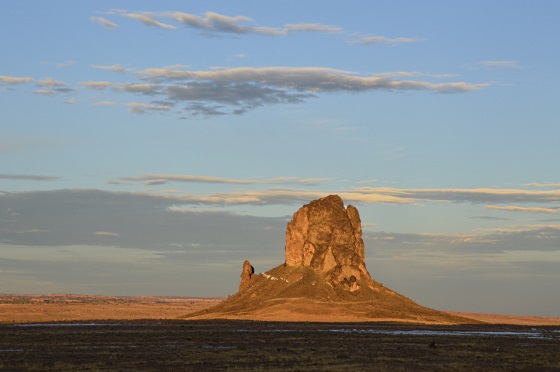 And then we already had to drive in the dark till a hotel in Farmington. The town has a nice little downtown with some nice restaurants, even a Thai one. Is is a good place to stop in order to investigate ancient Pueblo Indian sites, of which two are by the town – the Salmon Ruins and the Actech Ruins. This time we had no chance to see them, we headed to Chaco canyon which is maybe 2 hours drive, of which 16 miles were on a bad desert road. But the weather was good and the views were very wide and undisturbed. The first object that came into sight was the Fajada Butte – it is in the middle of the canyon and known for its astronomical markers. There are three rocks leaning against the wall on the top of it and they are aligned in such a way that a thin “dagger” of sunlight shines through the slabs and onto the cliff face at noon each day. There, people carved two spirals into the rock. On solstices and equinoxes the sun dagger falls onto the center or edge of those spirals -based on that they knew when to start their religious rituals and celebrations. 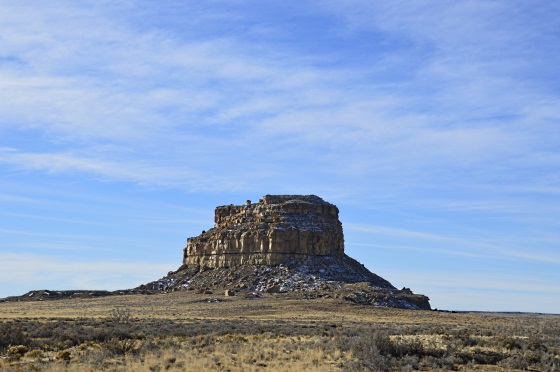 Then there are several “Big houses” scattered by canyon walls – really big houses, with several hundred rooms each. They were built during the period of A.D.850 and 1250. then they were abandoned, thus creating a big mystery. the canyon is pretty dry, how could such a civilization sustain itself? How could they build such big houses without having metal or wheels, using only stone tools?And no trees there – they carried thousands of trunks by foot from forest as far as 60 miles…What had to be their religion or other unifying force to make them work like this for next to nothing. There are evidences that the builders didn’t even live there…Only very few people inhabited the big houses, otherwise they were used for rituals and maybe some trade? Only questions, very few answers still. Scientists analyze how their building styles changed, how they were aligned to the four cardinal directions and also zenith and nadir, how they could built without any design and came up to similar patterns all over San Juan River basin, how they tried to align the Big houses to the so called sacred geography, the travels of the sun and moon through the sky at different times of the year, and maybe therefore enjoy their lives harmonized with nature better than any people living now. 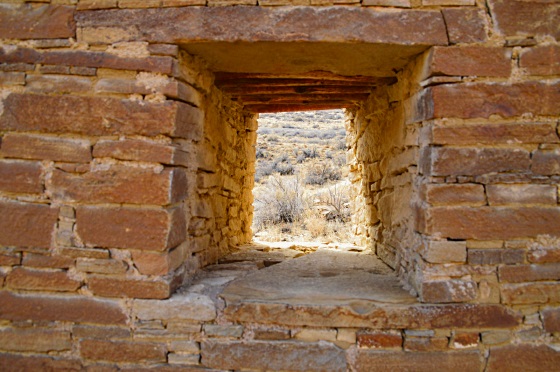 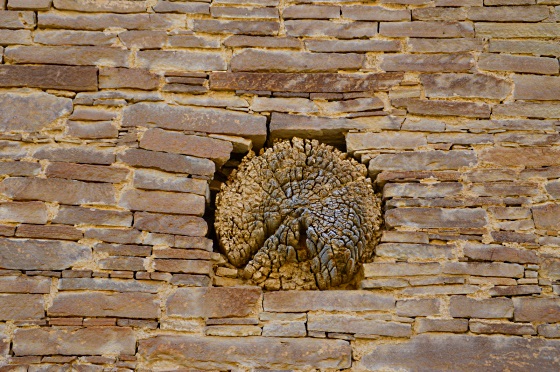 The idea of their sacred geology was to find the center place where all 6sacred directions converge and where symmetrically opposing forces are balanced. There they built a pueblo,and Chaco pueblos are their way the center for all the surrounding pueblos: 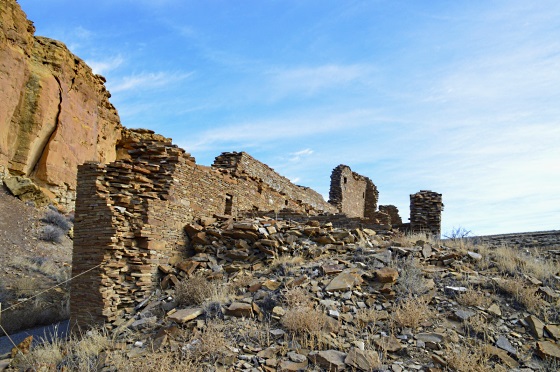 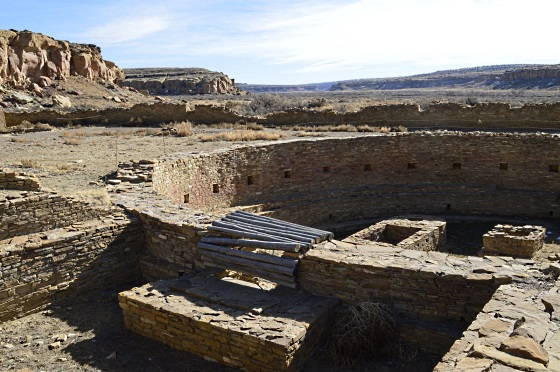 The round structures are called kivas and it is there where their rituals were performed: 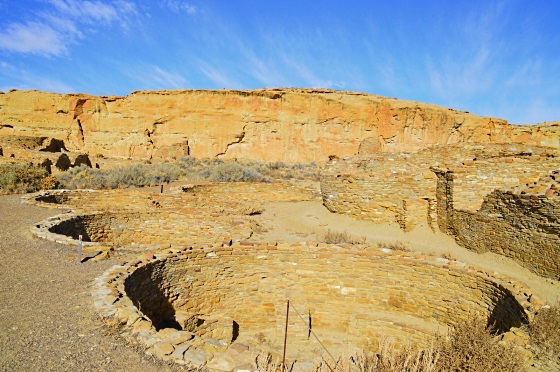 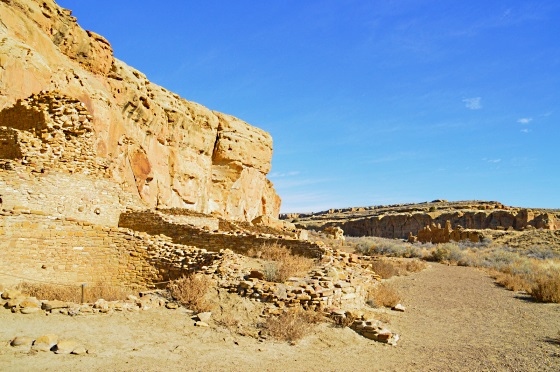 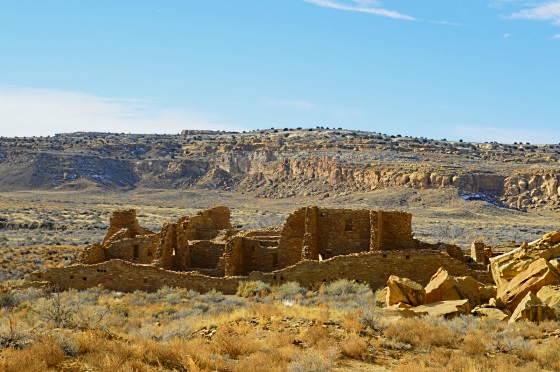 There are around 11-12 ruins of Big houses and many small ones, it is hard to see them in several hours but to get an idea how it looked like and to hike a couple of trails – it is possible. The biggest house is Pueblo Bonito – with hundreds of rooms, some parts of it 5 stories high. WE saw it only from the bottom, didn’t climb the very narrow and steep trail to the canyon edge to see from the top. Not this time. But it was impressive to walk in it: 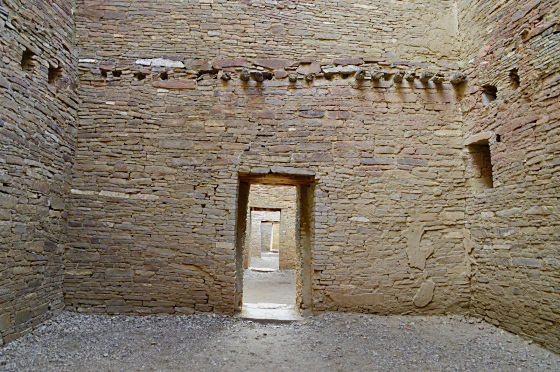 Why the windows arranged so strangely in the corners? To get the sun rays at certain times of the year and of the day: 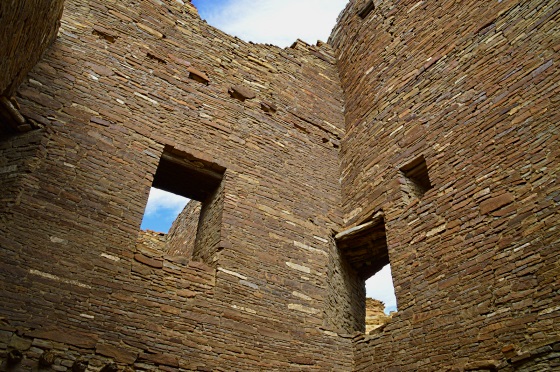 Chacoans also had their sacred time. In our so called Western world ordinary linear time outweighs the sacred time, whereas in traditional cultures the opposite is often true. As one Chaco scientist J.McKim Malville writes: “Sacred days commemorate great events of the past. Because the earth keeps revolving around the sun, these days , such as winter solstice, keep returning year after year.At these times the sacred seems to enter the ordinary world”. 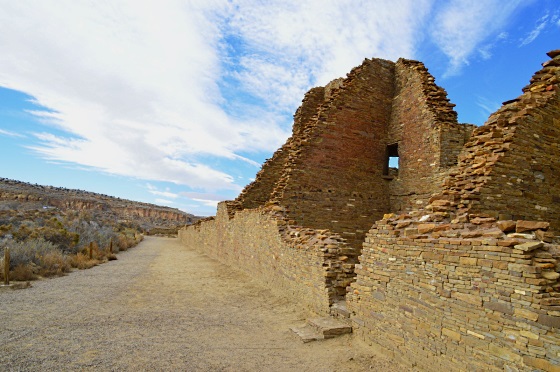 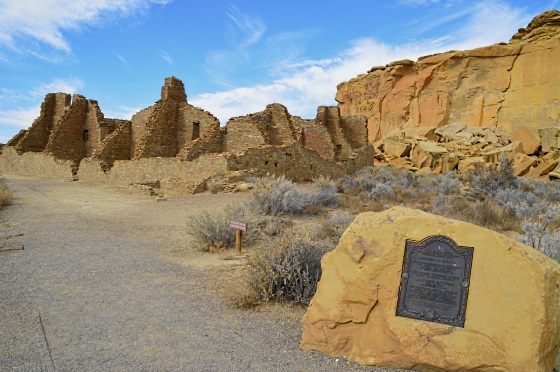 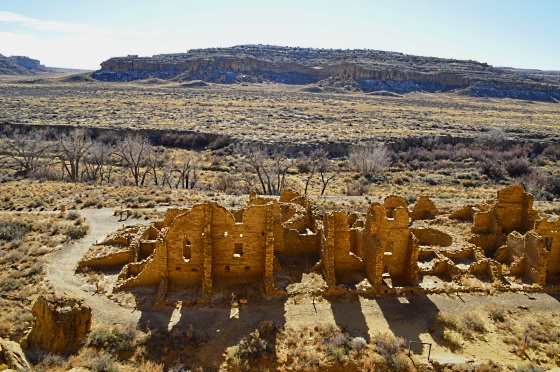 That evening we reached Albuquerque. New Mexico has such open spaces and wide horizons that to me it is a state of the most beautiful sunsets. Well, maybe not “the most”,maybe “one of the”. Our next drive was through a very spectacular canyon through Jemez Indian reservation on Rt.4,passing Los Alamos and reaching Santa Fe. It is a long drive. 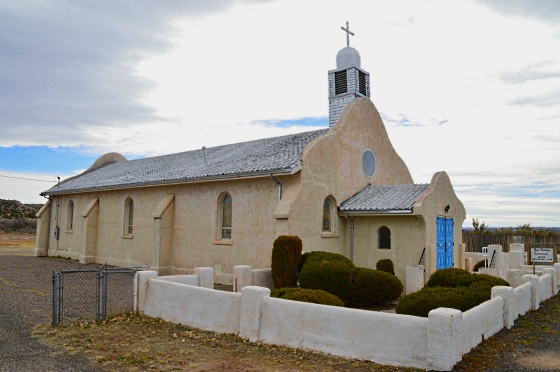 Some hot mineral springs come out by the river and form hose rock formations: 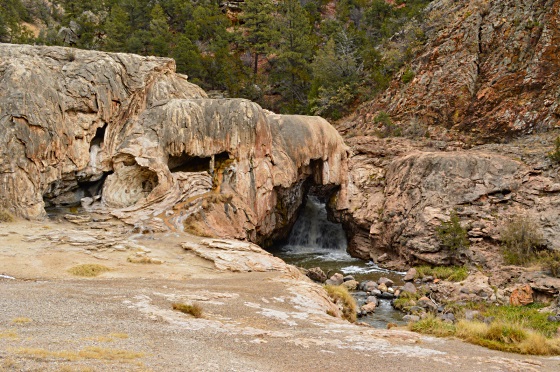 Our friend Dalia Narbutas from ABQ participated in this trip: 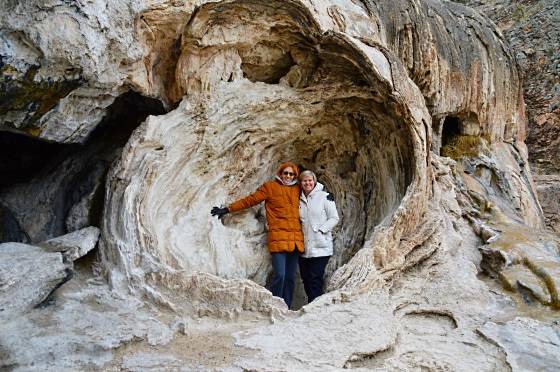 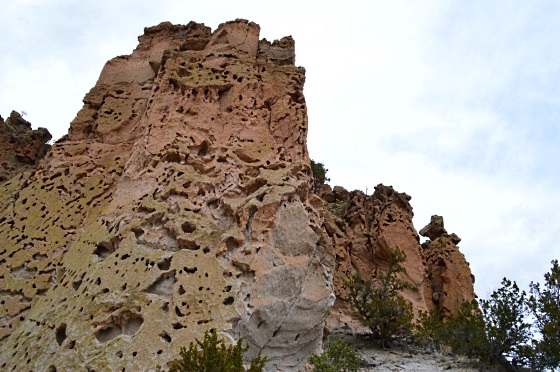 We stopped and ate on the Musem Hill in Santa Fe and then had a nice gallery walk in its Canyon road. 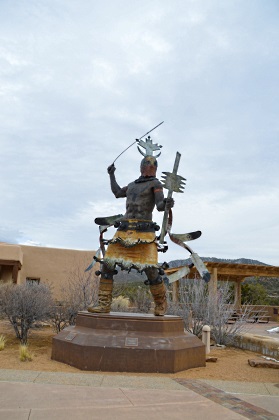 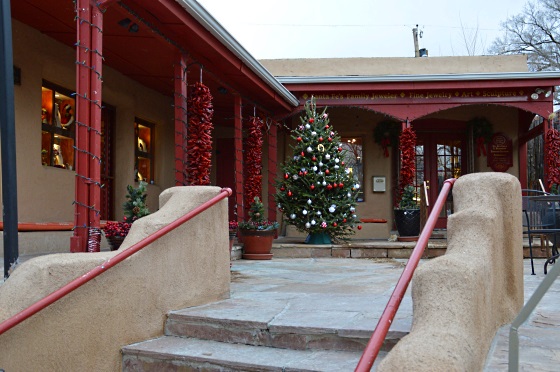 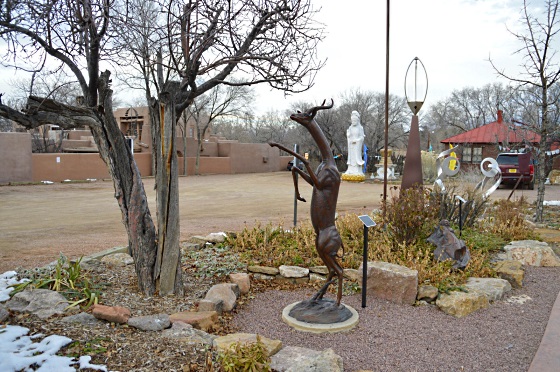 In Dalia’s neighborhood some enthusiast has a knack for decorating his house: 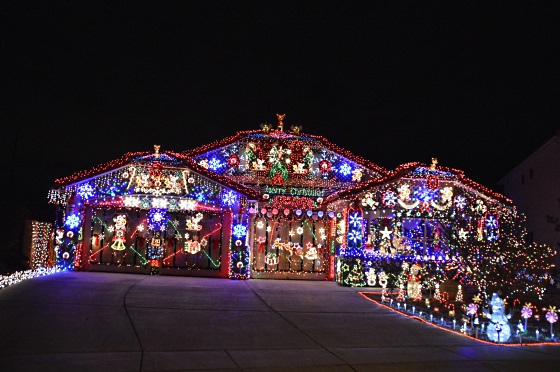