On March 1st we packed our luggage and left with a metro, then we a train to Barcelona Airport, terminal #2, where on one end of it all the shuttles from hotels and car renting places stop. In a short while an orange shuttle came -Sixt it said on its side. The rental office was not far away, except that the airport area is so complicated, so many one way streets, highways, exist, turns – it was hard to imagine how are we getting out of the office alone in the car and how are we getting back. In actuality the first part was easy. that latter one – hard. The office itself was also orange and very nice. very big, with the girls behind the counters speaking English. They even had coffee, yogurt, OJ, fruit and muffins for the hungry travelers. Very fast we got a small car and were off for adventures. The positive part – they are driving there on the same side of the road, unlike in New Zealand :-). For the record – they charged us 184e total with the fees for the two weeks. It came to a little 13e/ day, not bad.

Off we went, around the city through its highways or beltways towards the sea in the north of it and tries to stay on Rt C32. At first it went completely by the sea, then it went through towns. sometimes passing towns on their sides, but all the time we had to be careful and know the next town to follow the right direction, for as you know – in Europe they usually have many round-abouts and they almost never write on the directions the number of the road, but only the next town. The first stop by the sea – somewhere in Mataro area where we noticed an easy access to the beach : 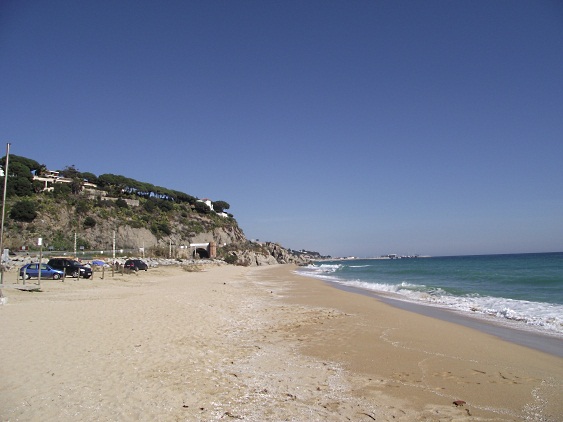 The next stop – I am not very sure which town was that. but it had a big castle-church sticking on top of it so we drove into its narrow streets towards the sea, got almost stuck there. got scared :-), didn’t find any place to park until we drove out and parked up on a cliff under that strange church-castle, then descended down to the town train station, and up again – lots of climbing up and down in those coastal towns…: 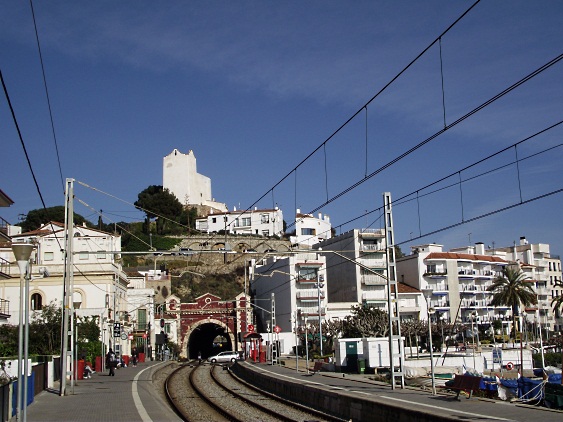 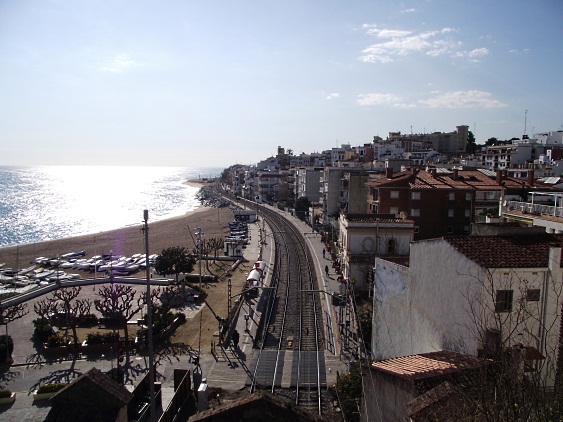 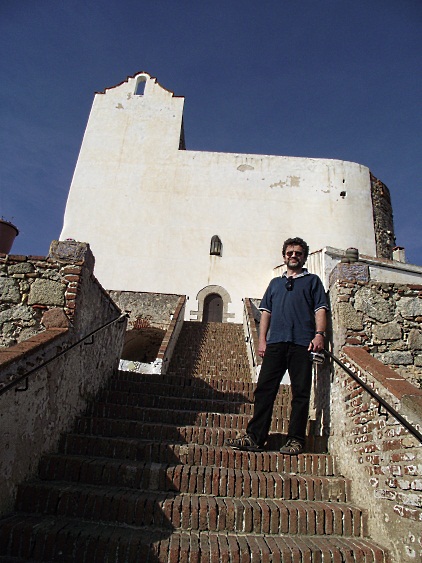 WE even climbed to the top of the cliff to that church-castle (from the back side it is gray and really looks like a castle) and took a picture of its doors: 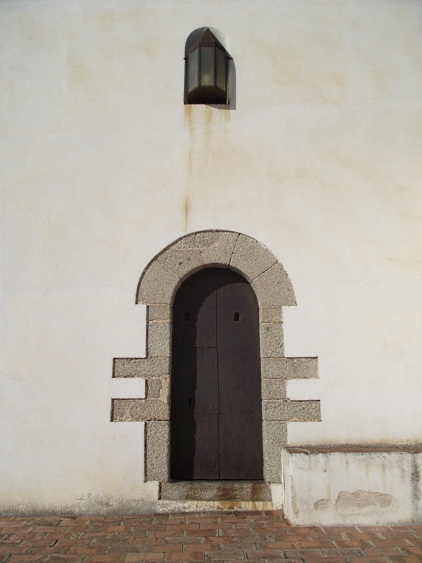 And then off to Tossa De Mar: 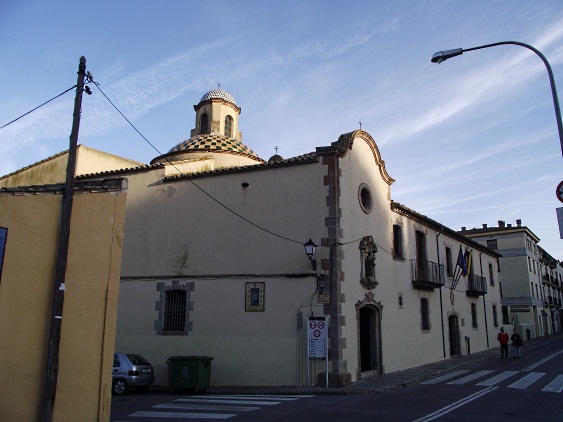 Where there was no problem to park the car though we took the last spot in a small parking place – I wonder where do people park during the season… – by some old ruins which I don’t know nothing about: 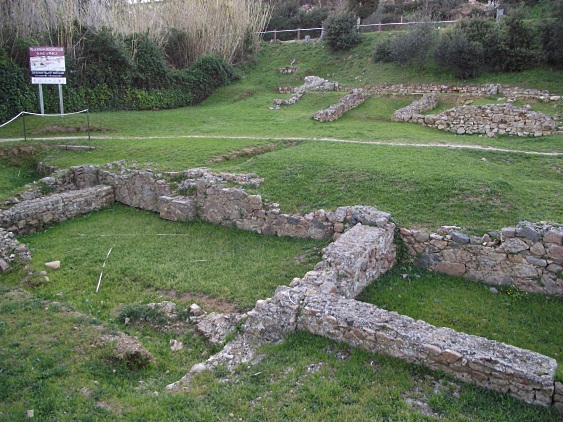 I don’t know where those people of those several cars from the lot were, because the whole town looked like dead. like a ghost town with most of the shutters down… 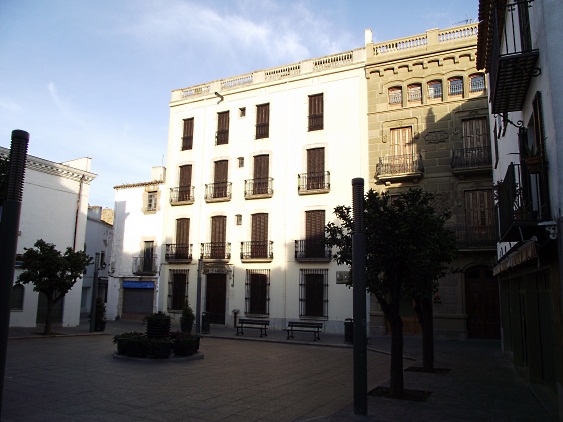 Very existentialistic…Like in an Antonioni’s movie… 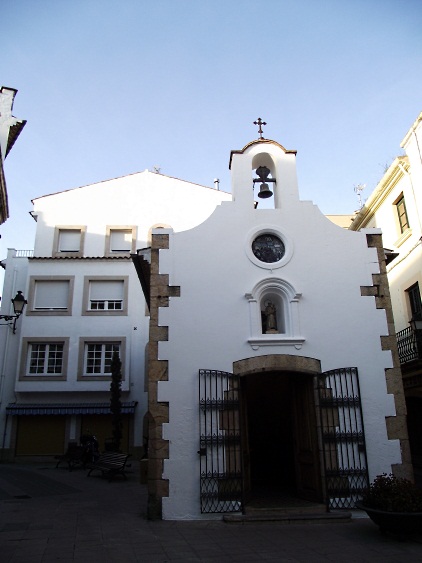 But the town was as pretty as it can be and we were as luck as we can be to get pics without crowds in them: 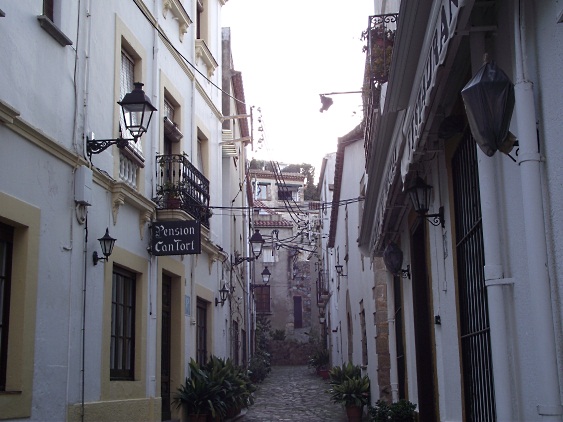 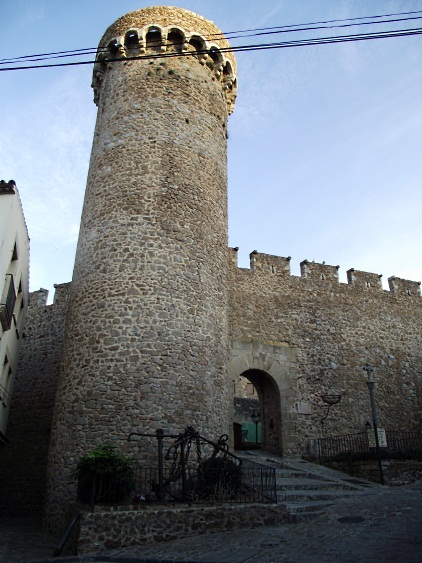 Then we reached the castle-medieval part of the town which was especially impressive: 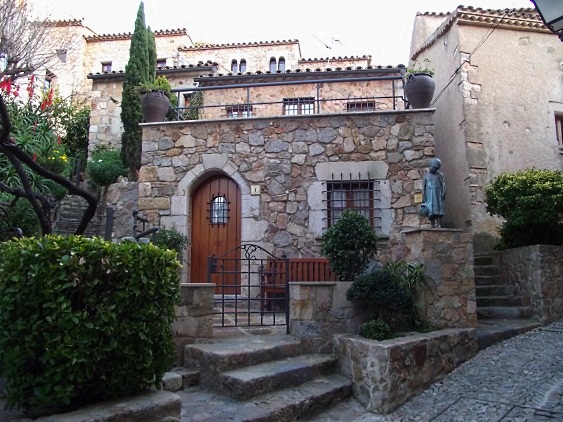 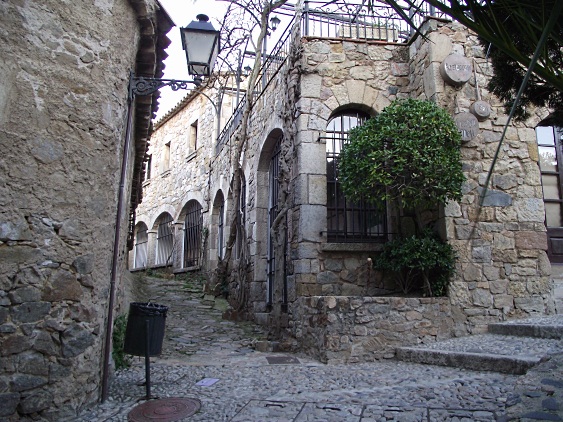 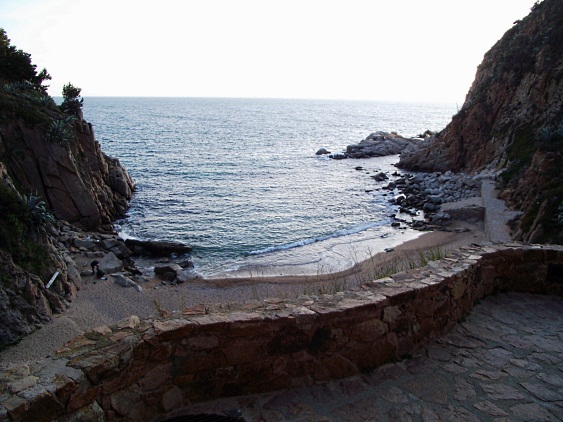 They usually have a walk on those fortress walls, as I noticed later, wherever they have a fortress. So here is a view to a small beach from those wall. They have another bigger beach, but I can imagine why there is tension in Costa Brava for a space in a beach…Once we had a British couple who said they have a small cottage somewhere there for the summers and they are very angry with the other big nationality in Europe whose people are always the first in the morning to take all the spots on their closest beach. Being used to spacious Lithuanian beaches by the Baltic I didn’t see where is the problem. Now I saw :-). 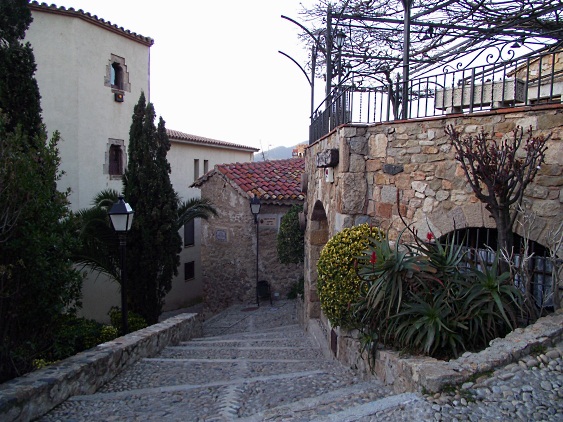 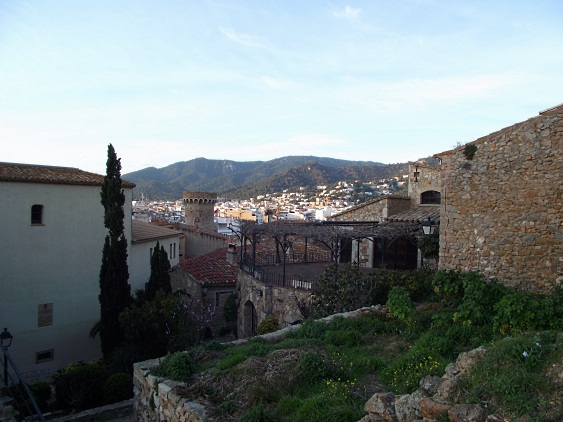 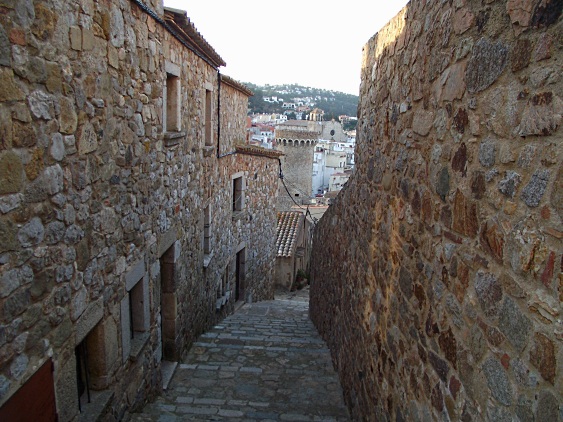 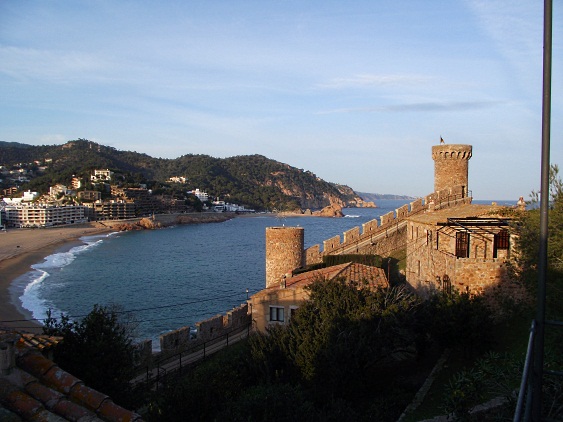 Here is a wider beach. 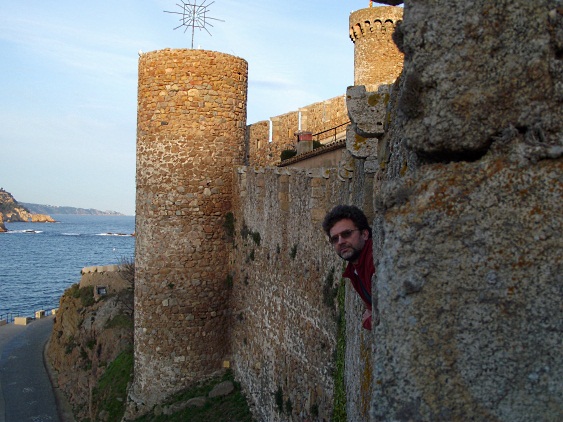 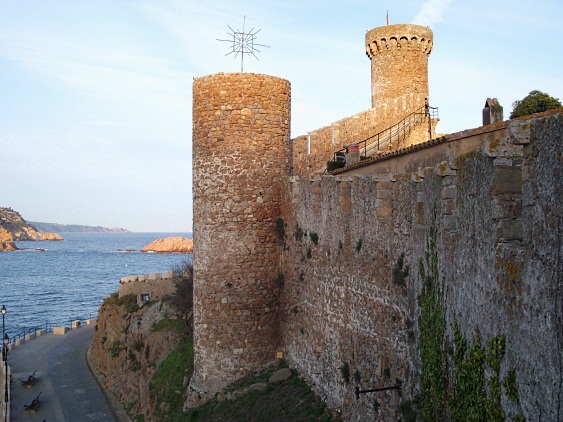 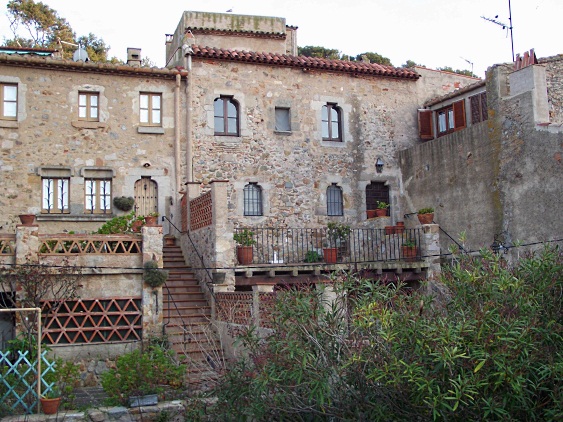 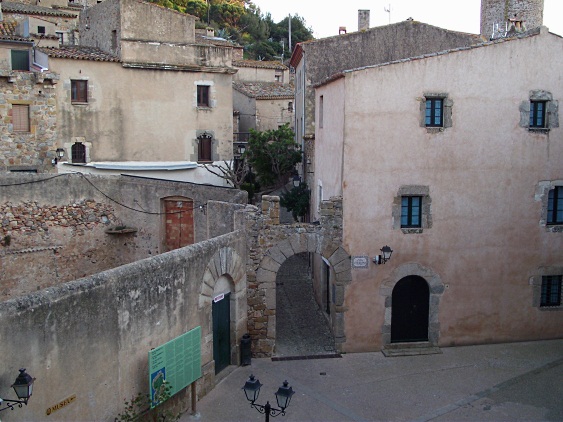 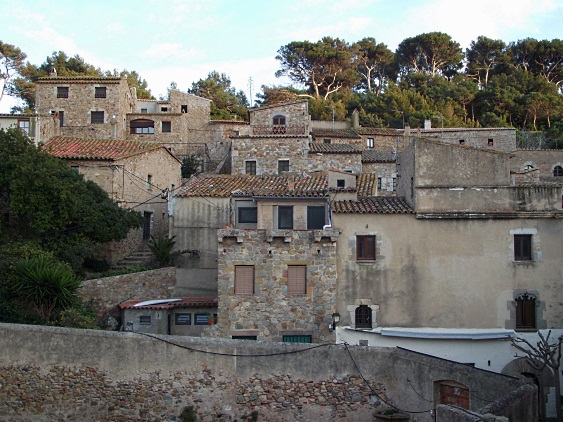 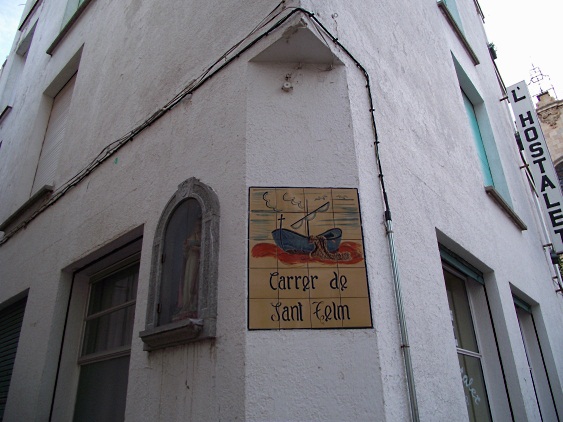 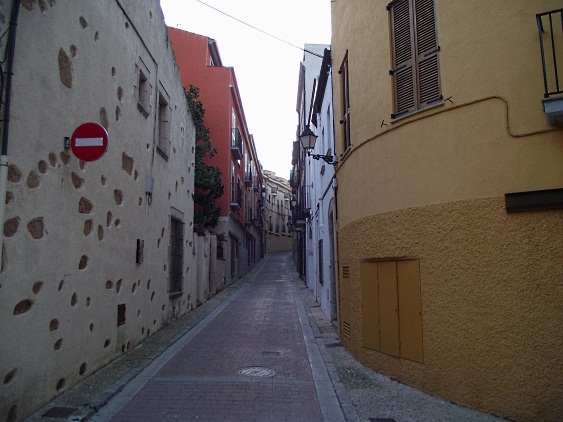 The sun was setting fast, it was good for some pictures, not very much for the others, and definitely bad for us – we had to rush fro to reach Girona we had to drive at least an hour on the narrow winding mountain roads. The last views of Tossa from the road: 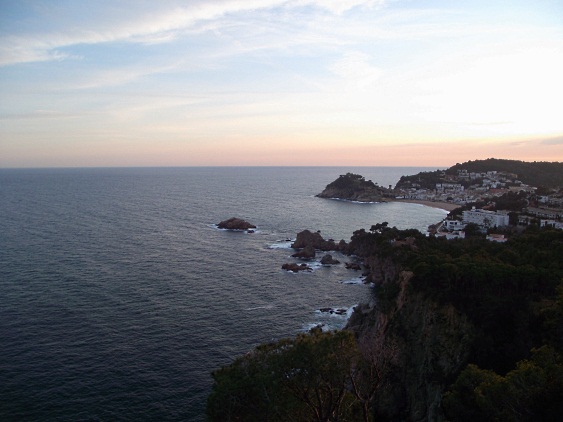 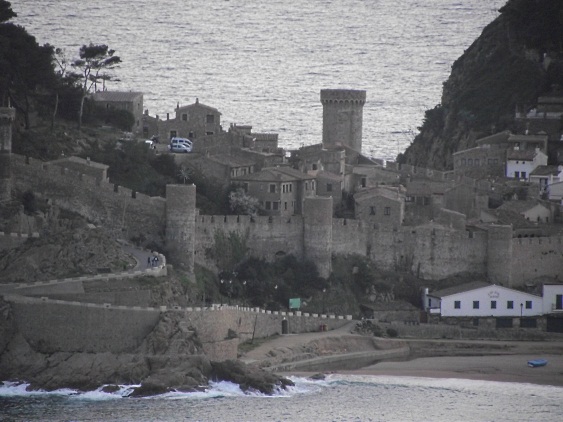