The owners of hotels, guest houses usually have a folder with a selection of trips, which pictures of happy tourists while on trips. It is a good way of advertising. You buy a trip from your owner and make him happy – they get a commission, and then the next day the mini bus comes directly to your door and picks you. So we picked a trip to Golden Triangle via hot springs and Chang Rai. The price was very right – 900 bt each, a whole day trip lunch included. We were picked rather early and drove out of Chang Mai, a rather spread out city, through hilly landscapes with their so called jungle being very spacious, not crowded with trees, full of calm light that reminded me of our Lithuanian forests in September, if not to notice some banana trees here and there. The first stop was Hot Springs, I don’t even know which ones :-): 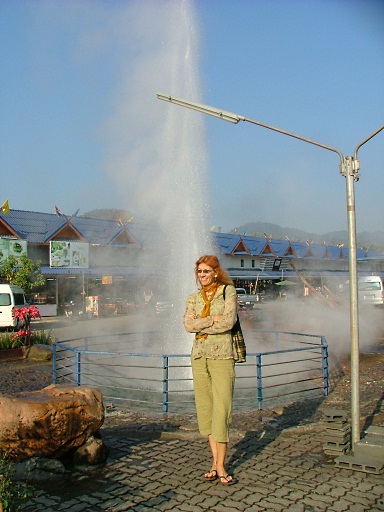 We had only a half an hour, only to immerse our feet in a specially done pool by bus stop. No time to go and take a real bath…but there were woman, as always, selling a basket of 10 quail eggs or two regular ones so that tourists can put the basket into a hot spring and gettheir eggs boiled: 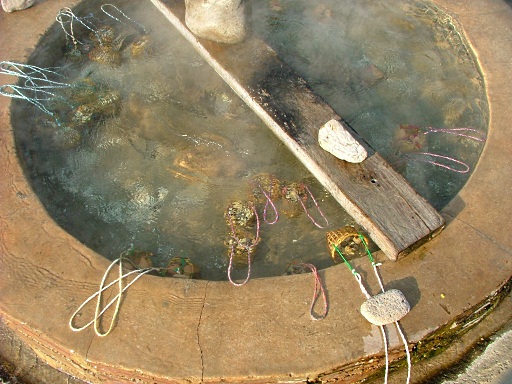 Yes, couple of minutes and the eggs were done. A good snack. 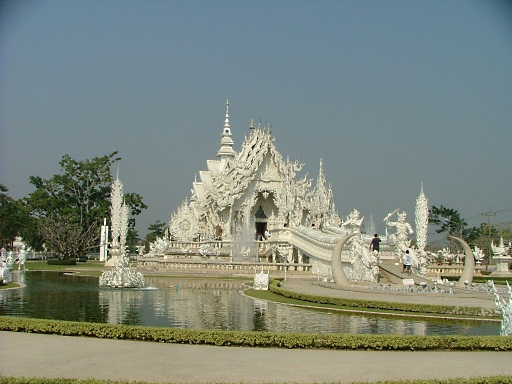 The White Temple of Chang Rai was the next stop. Is is being built now, not finished yes, one wall inside still to be decorated. But from the outside it looked amazing. It is not particularly my style of architecture, but it still looked amazing… 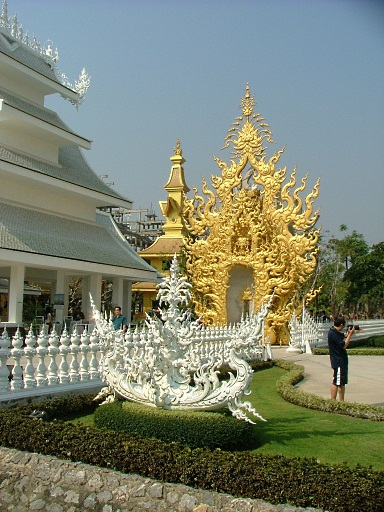 I particularly liked the two sculptures or “icicles'” by the entrance to its grounds: 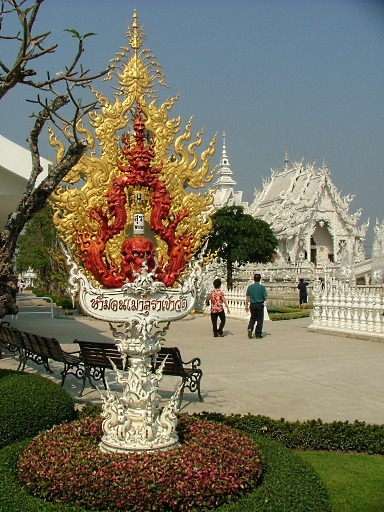 On the left there was a devil with several faces with a whiskey bottle!!! 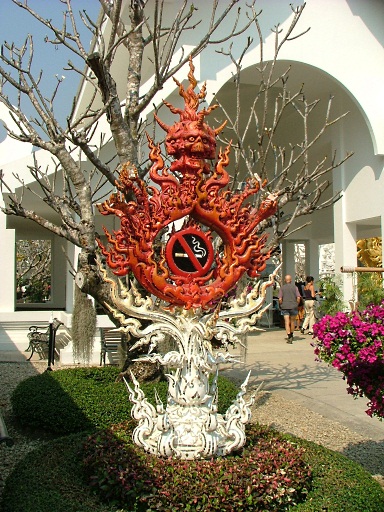 The other one on the right also had devil faces and lots of hands around the sign, with real cigarettes, cigarette boxes, matches holding them!!!

We asked the guide whether it is considered bad to smoke and drink alcohol in Buddhism. Yes, it is , that is what the warning signs meant. But…their Buddhism is very “user friendly”, everything is is upon you. Your afterlife is your business, your responsibility and nobody would ever despise the ones who don’t follow the rules in order to enjoy this life more. 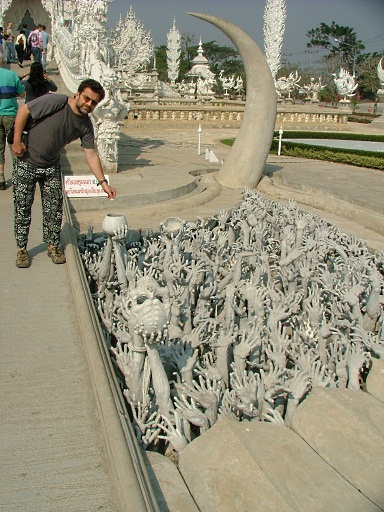 Going to the entrance of the Temple you cross a bridge over a small “pond-hell” with the hands sticking from the depths of it with desperation…temples are supposed to remind us sinners about the hell’s existence and the architect did a good job to show us that. For good luck – toss a coin into a prepared jar… 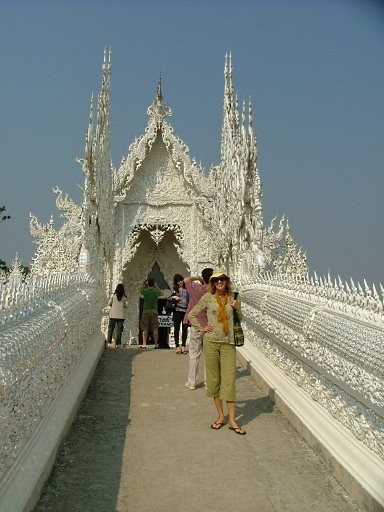 And then there is this long white path to the entrance, with symbolic nagas -snakes on the sides. They start with two sculptures – a male and a female: 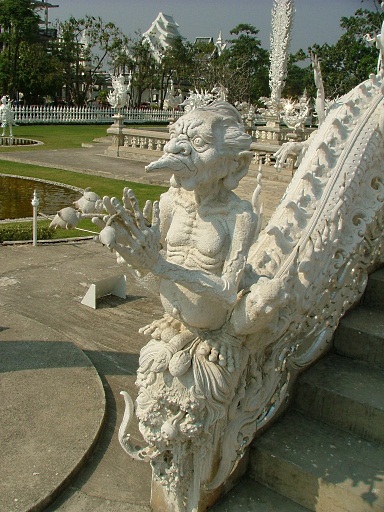 This comes from the hill tribe’s tradition to have a male and a female signs on both sides of their gates to the village. Only those in villages are super primitive, here they are more elaborate: 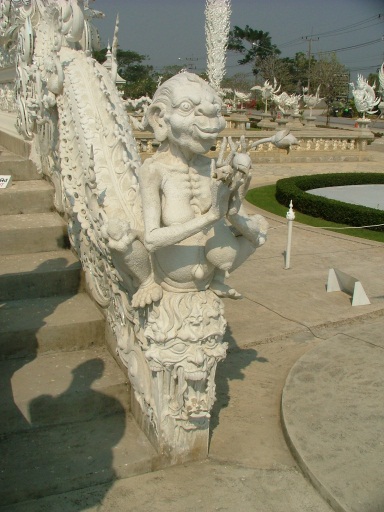 You can spend a lot of time in this Temple, analyzing each sculpture or painting. But we had only half an hour…The most astonishing part was once we entered the Temple itself and turned towards the back wall. They don’t permit to take pictures there, so sorry, only my interpretation of what we saw. First of all you see the front – the altar as we call it. there is a wax monk sitting there and the wall behind him is the description of Heaven. Just as one can imagine – everything is romantic, forms, colors, shades, but this is the most uninteresting wall and who can remember what it was depicting…The side walls show people in boats swimming towards Heaven, also nothing particular. But the back wall, as you already guessed, is Hell – and what a Hell it is…Painted in surrealistic style there are very decorative heads of devils, on the background, but still prominent. And on the foreground in brighter colors are some main characters of American popular animation movies, some bad heroes, police cars, lots of rocket-bombs and the main point – 9-11 in New York! Yes, the twin towers collapsing, one airplane already stuck, another approaching and the juices that fall from all this are in gasoline pipes dripping straight into the mouths of devils…The artist gave a lot of thought while doing it… 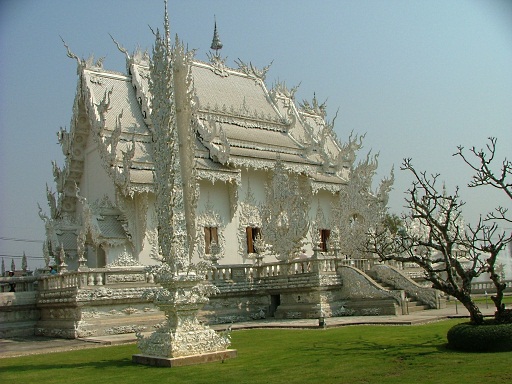 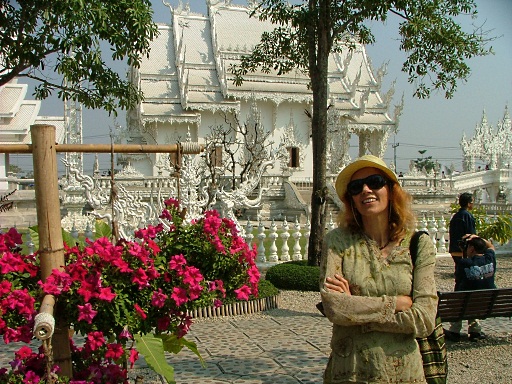 In and hour or so we reached the Golden Triangle where two rivers and three countries meet -Thailand, Myanmar and Laos. The main river is Mekong, looked very wide to me, but the guide said it is at its lowest level because of the dry season. And you can see that – the water line is very low down the slopes or steps, depends on where you look. Our group took a boat ride to Laos market, we stayed. Too short to enjoy. 1 hour total, 300 bt. There was enough to see on this side, the place where opium trade once flourished. The markets are everywhere, wherever the bus stops and there are always beautiful things to buy that you can’t resist… That is their way of life, I guess, to sell, sell, sell. And temples are also everywhere. So during that hour we managed to see only one temple on the edge of the bank – made into a boat with Buddhas sitting on top and elephants posing, too: 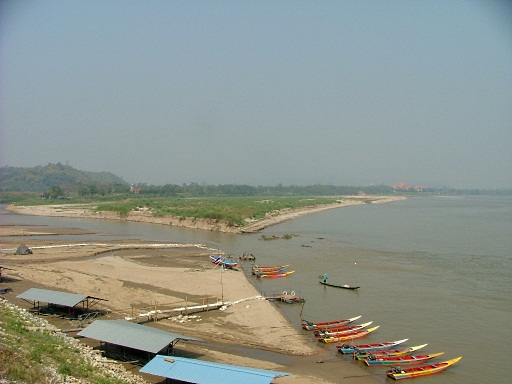 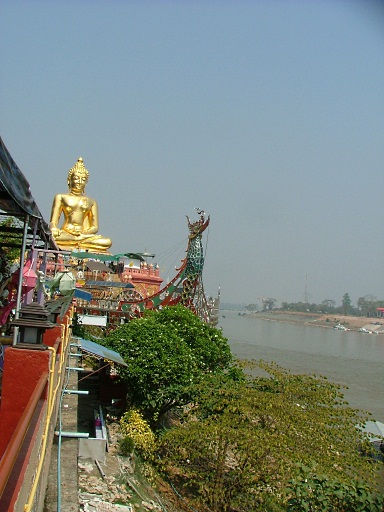 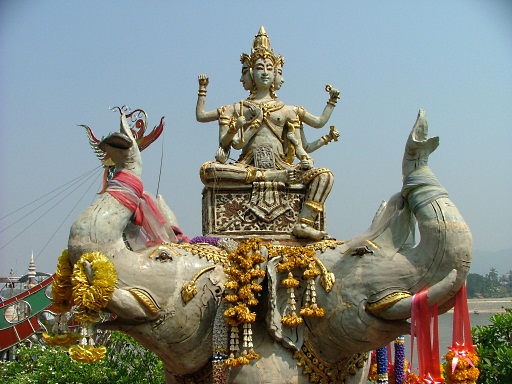 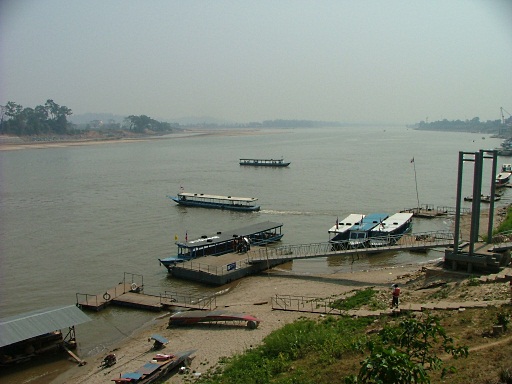 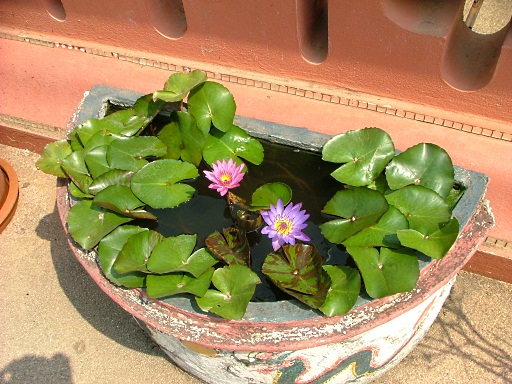 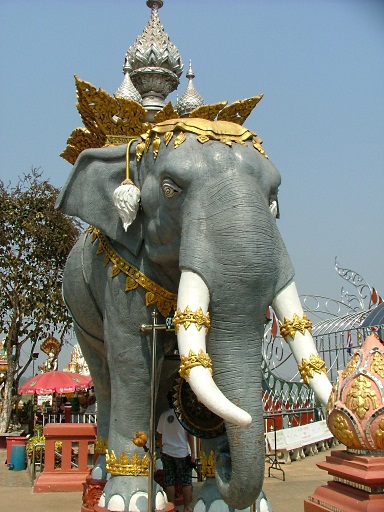 Then a stop in Mae Sai -for a buffet type lunch, boy, it was good! Under those bougainvilleas: 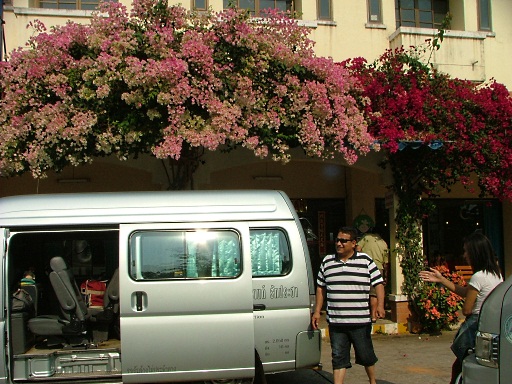 And here is the border with Myanmar (Burma): 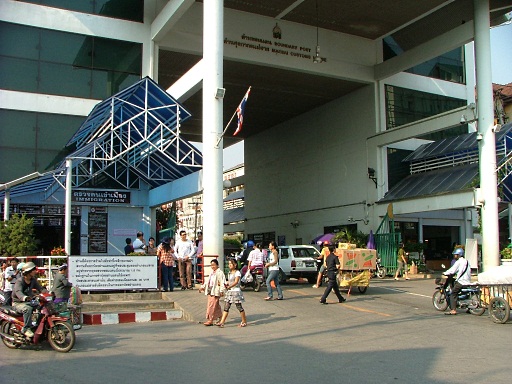 The whole street leading to the border is a humongous market, as usual… 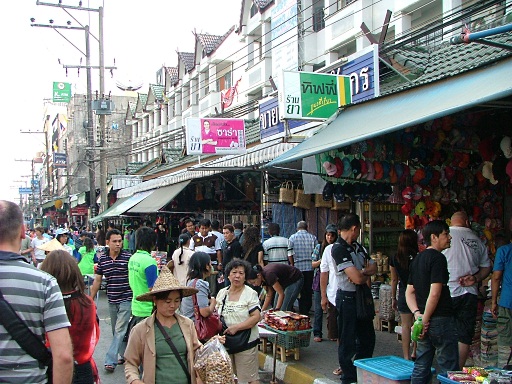 They say there is a lot of Chinese goods sold there, but to my eyes they were all the same, too much to even distinguish.

At the end of the trip we visited one hill tribe village, if i remember correctly it was Hmong tribe: 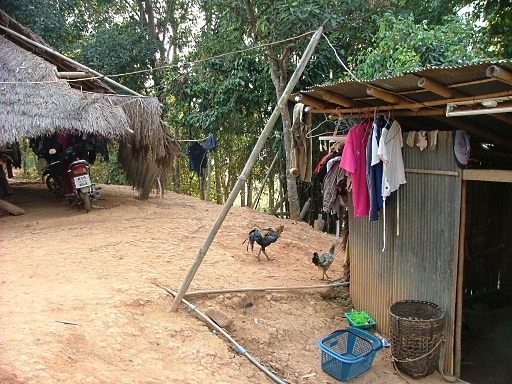 The visit was too short to make more pictures. In short – it was very poor…people living with pigs almost together…but some of them had even motorcycles and among this poverty – there were tables with things for sale – arts, crafts, silver…

The whole trip was long, it took us maybe 3 hours to return and it was late in their standards, around 8 pm. Totally – it was a 12 hour trip.