I have to admit – I didn’t walk enough in Chang Mai. It was hot, though not as hot as in Bangkok. But maybe the inconvenient streets for walking were the main reason. The sidewalks are not always there, but if they are- they are crowded with either stuff for sale, or motorcycles, or restaurant tables, in other words – none of Thai cities are walker friendly. And it is a hazard to cross the street – sometimes I would stand for a long time until I dare to just go straight into the stream of cars and expect them to slow down or stop to let me through. Those who live longer there- they get used to it and sometimes don’t even bother walking on the sidewalk – they pretend they are a car or a tuk -tuk 🙂 and walk on the street. It is at least more even than side walks -which have steps, holes, slush, whatever that can make you fall badly if you decide to look around instead of looking down while walking.

As I mentioned earlier – I would walk for 20 min almost every day we were there to the other side of the river to do Chi -gong with Chinese people. But on this side of the river very close to the pedestrian bridge there was a different temple – built in a very crowded with buildings and a dirty corner among several streets. Too beautiful to be stuck over there… 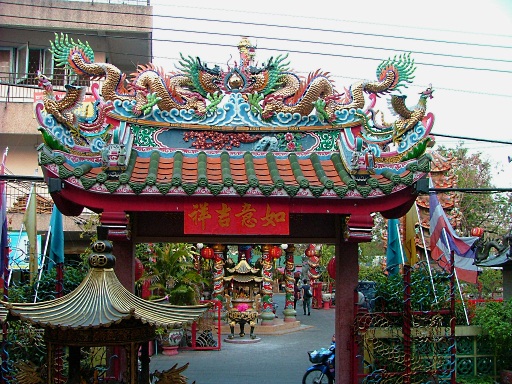 It seemed to be a Chinese temple, only the papers that I got there were telling me a strange story. Yes, it is adorned mostly by Chinese people, but the saint they are worshiping there was an Indian and he had a bad temper and character: 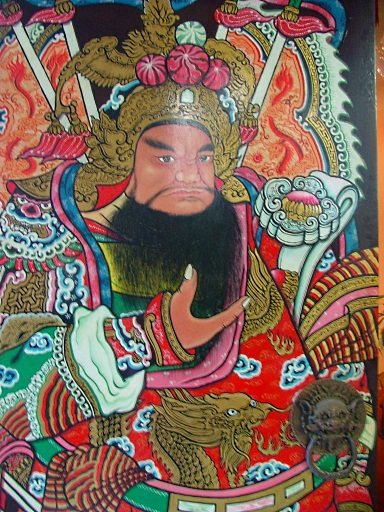 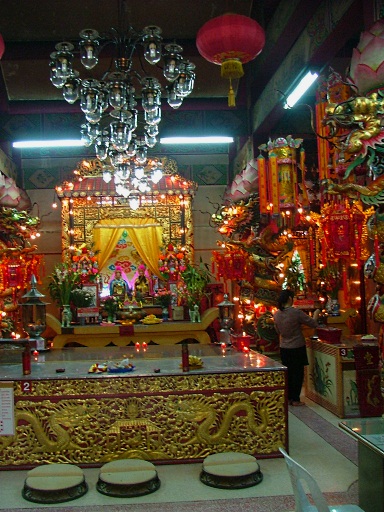 To tell the truth – in that heat my brain didn’t accept information so I mostly forgot what I read in those papers…Evidently Buddha story is not enough for people to worship, they need a variety.

As usual with Chinese – they had a beautiful tiger image on one of the walls: 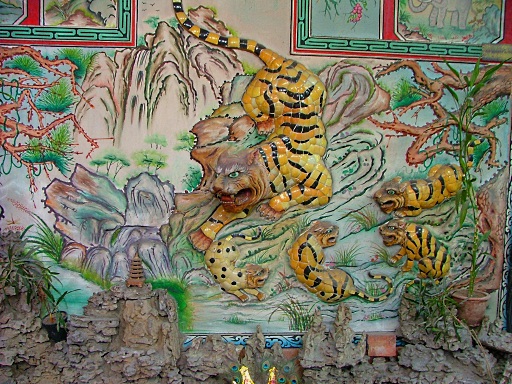 The mountains or rocks that Chinese paint in their watercolors or in this panel – they are usually very specific, and I thought it is a creation of their imaginations. But no, we saw some 3 rocks that looked exactly the same sticking out of the plains of Thailand while crossing the country on a bus. But I didn’t take my camera in time to take a picture – in awe…