10th day was spent well. The morning was lazy. Only then I realized that our motel is surrounded with kiwi
orchards. Kiwi are hanging from the wines that resemble grape wines. There are some citrus trees by our road, too. They get slightly freezing nights in their winters which is our summers, but evidently – not too bad. So we drove from Motueka to Kaikerikeri beach, where the sand was so gold and bright yellow! the tide was coming up, you can literally see it. You cross a stream on a shallow place, then come back in a couple of minutes – and get your lower parts of pants wet… 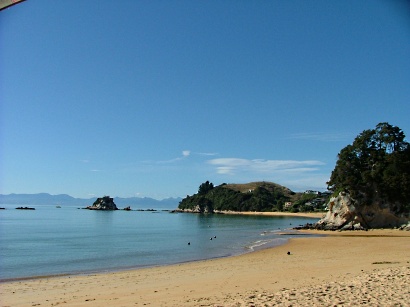 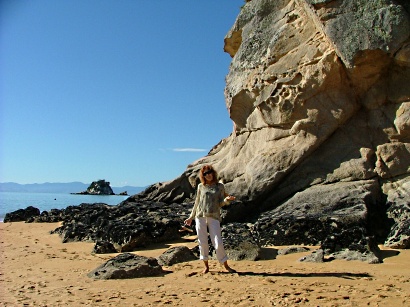 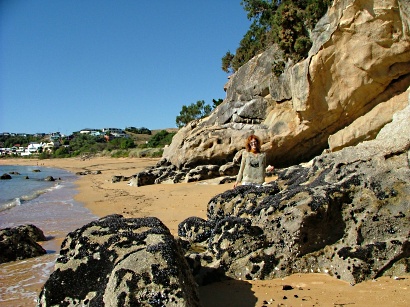 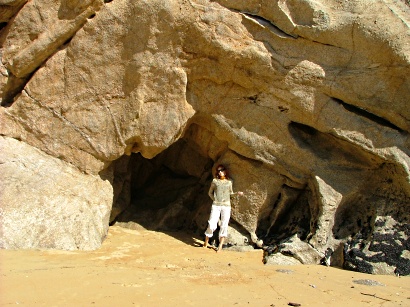 Again we missed the road to Split apple Rock the first time. They didn’t even bother writing it on the main road. Later, when you are on the way to it – so that you won’t drive into private properties, they start showing signs -turn here, turn there. And I have to say – those roads here are super winding and narrow. Kiwis have a sens of humor – the speed limit on them is 100km/h. Well,as much as we tried – we couldn’t get faster than 20-40 km/h.
And here is what we saw after we descended from a bush path to that Split Apple: 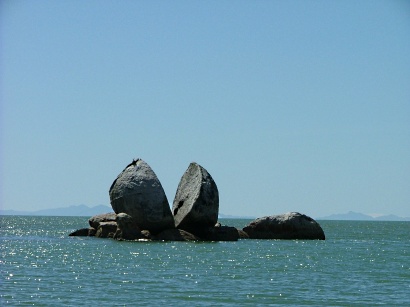 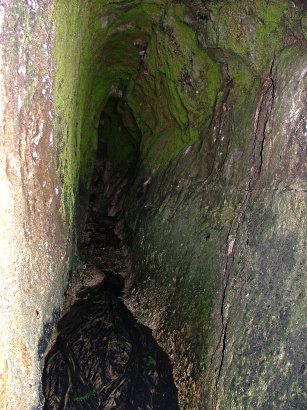 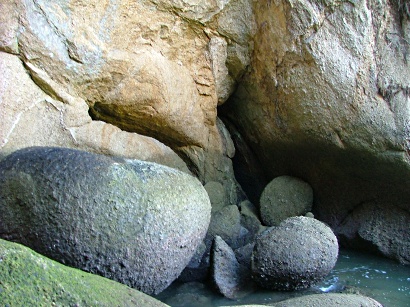 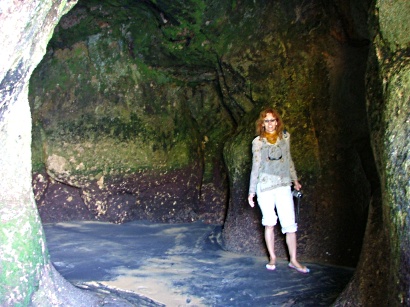 Luckily the tide was not completely up, so we went into the caves, they had glow worms but it was daytime and worms don’t shine in the day. Andrei swam to the rock and around. I did some yoga and Tai-Ji on the beach, which was yellow but not that bright as the previous one. 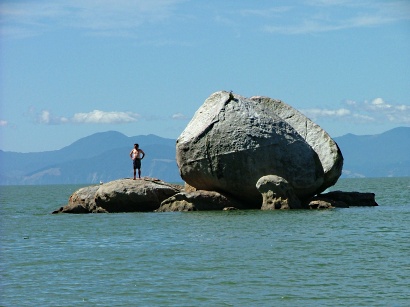 A break in between beaches – we had locally brewed Sassy Red beer in a cafe by the sea and lunch and a triple chocolate muffin, so big and so tasty that it filled us fro a 12 km trip! In Kiwi it is called – tramping. So we tramped in Abel Tasman National park – on a coastal trail. It started with bridge type walks on wetlands – by the time we entered the lands were being filled with water – the tide was going up, so evidently, that the streams of water rushing were seen everywhere. 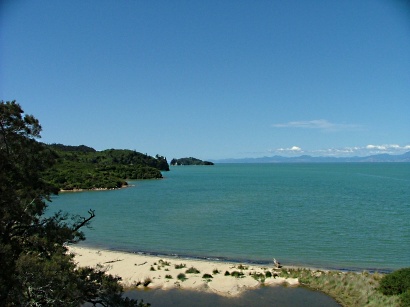 Then the trail was was cut on a shelf of very dense bushy mountains with views and walks to the beaches. 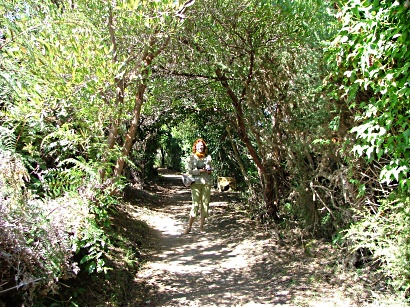 So we walked and swam in beaches and it was fantastic! The jungle or bush as they call it looked the same as on North island. Dense, lots of different trees with the tree-ferns dominating. And lots of bushes. Also – there were dark bright blue berries of unseen origin to me hanging on the sides. The path was well maintained. It had some bridges, some waterfalls. 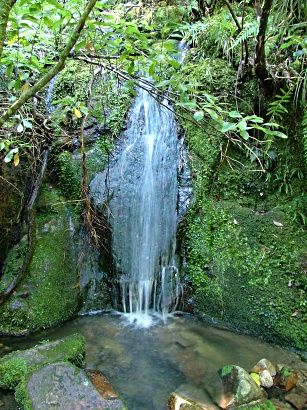 It also had strange places where the trees and even their leaves were turned black and the area smelled unpleasant but distinctive – never smelled it ever. I thought it was some king of local fire and didn’t even question that thing. The only questions were in my head – why then anything didn’t burn or how did they extinguish it. On the way back I dared to ask a Canadian couple about it – and they pointed that it was some kind of fungus or mold. It was just a pest. And then I looked closely – of course it was a mold. Even green leaves had black spots, looked as if they were dirty. Luckily, those things were not all over, just in spots. 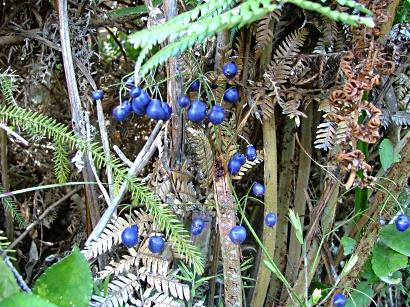 We reached the Apple Bay (somehow a lot about apples today :-))and turned back. And on the way back the water started to subside – also very fast, so fast that the bay I swam and was afraid not to stand on some log – it was completely barren from water, we walked there and found other caves and found a picture perfect view: 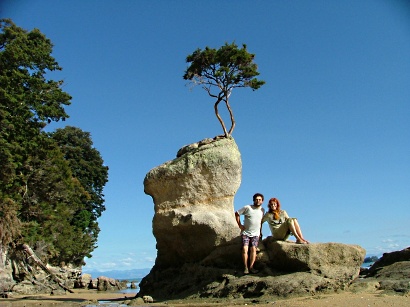 And here are pics of the same place during tide and then after it is gone: 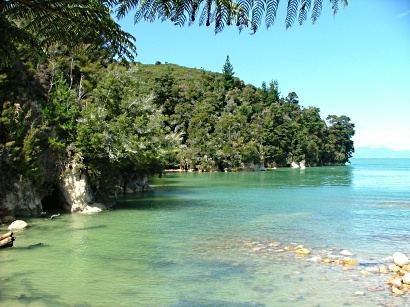 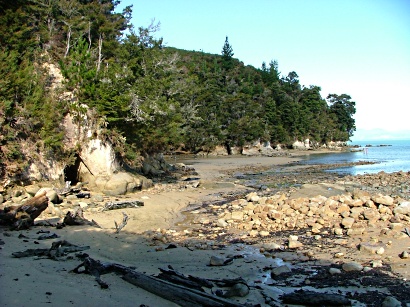 The tide is gone:… 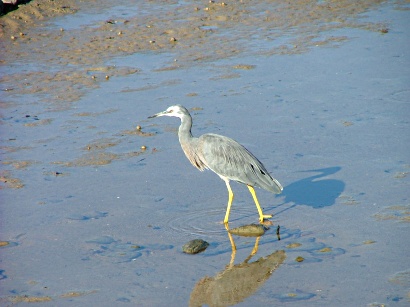 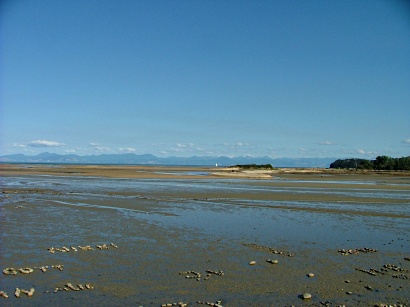 Then on the way back we drank another beer in the same cafe, and later in Motueka found an internet place, (I can’t call it cafe – there is no coffee there), but they are open till 6-7pm, so luckily we managed to use their service.

We are sleeping in the same motel, I don’t even remember the name…Because they don’t have and use internet, so what is the difference. But everything else is very good here. The view from our doors, kiwi gardens in the background: 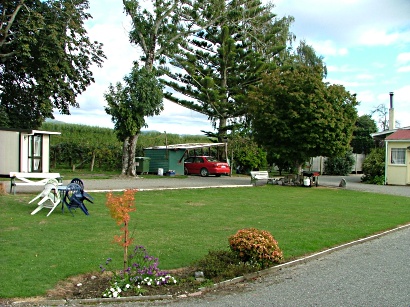 Oh, and there are so many orchards here! the apple trees look young and they are all tied with ropes on frames above. Many frames, some fields of apples are literally covered with white nets, some grapes and kiwis are also covered with white small eyed nets, row by row – so much investment in their orchards! And I figured out who is working in them – the young people from all over the world who are smart enough to want to see NZealand! They come for a season and work and get acquainted and travel. Wonderful life! 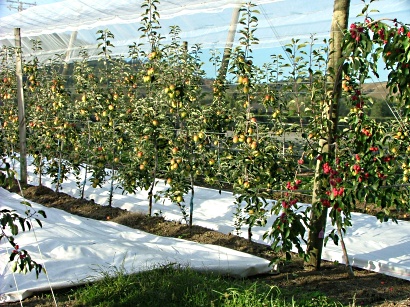 Also, by the Park we found an impressive gallery/hippie workshop garden. It reminded me the “Orvidu Sodyba”in Lithuania. Or a Stone Garden in SLC, UT. Except – no words from Testaments or Book of Mormon…No sacred words, period. More naked ladies done in wood. It was impressive, and all those sculptures intermingled with neat vegetable gardens. The soil so rich…Susan would have liked it soooo much ! 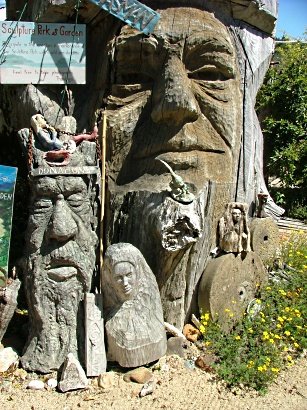 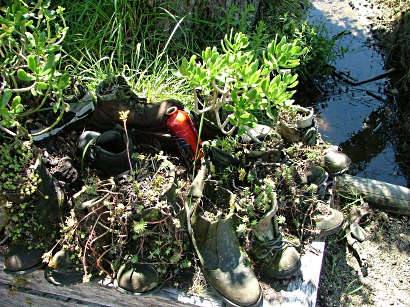 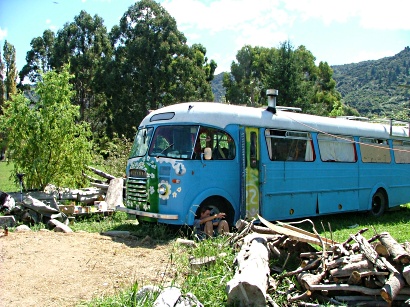 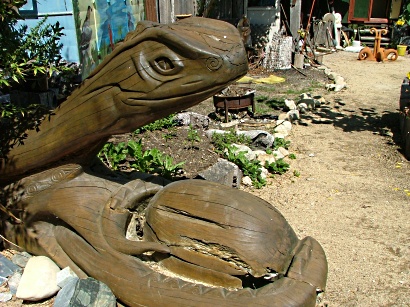 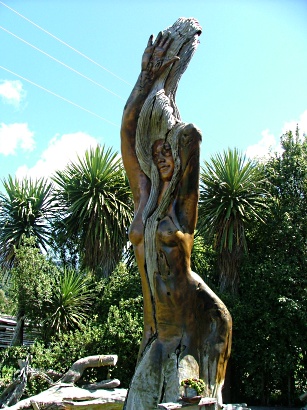 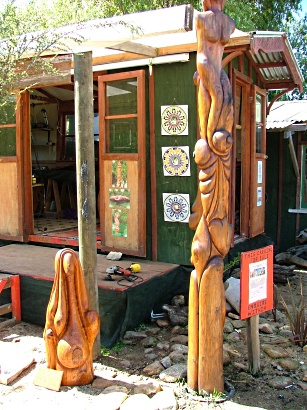