Summers are deadly hot here. Or so I perceive them. The only thing one can do in the park, to my opinion, is hiking the Narrows. Well, there are people who enjoy the heat after spending long and cold winters in the Midwest e.g., so I don’t argue with them. I am happy they can do some other trails in addition to the Narrows. But not me. In the temperatures of human body my body refuses to move… Zion Narrows is the only place you can expect to get some relief from summer’s sweltering heat. Not as much for the reason they are narrow, as the name says, and the sun is not baking the bottom all day long, but because first – you have to walk in the water, and also – there are plenty of places where ancient water that was rained long long ago is soaking through the sandstone walls and creating a natural swamp cooler. But before you get into the Virgin stream you have to suffer a little. You have to get onto the shuttle which is not air conditioned and though the drivers are very interesting in telling their stories about Zion NP, at the end of 45 min ride you start feeling sorry for them – to work all day in this heat…Good they manage not to turn into dried prunes.
Then you get out in the last stop which is called Temple of Sinawawa because there is a natural rock pulpit and an altar in the middle of the square surrounded by tall walls. Good thing there is a toilet there. After that – no water, no toilets, you have to think and organize your life around it. So you start walking from that point towards the depths of the canyon on a paved path – quite a comfortable one. It is 1 mile to the end of the path called Riverside Walk which ends with some stone steps landing to the rocky shore of the river. This is where crowds gather. The ones who prepare themselves for the hike, change their shoes if they have the better ones for river walk, or take off their shoes they are sorry to get wet, and the ones who don’t plan to hike into the river, just watch the hikers or sit on the bigger rocks and have their lunch: 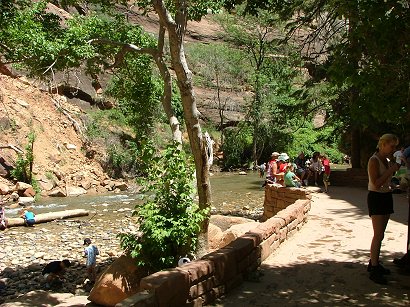 Having that in mind and being already hungry we had our lunch before the very end of the path: 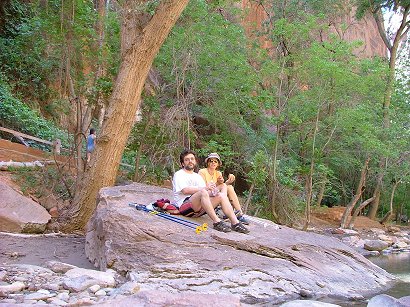 As you may see we were using our ski sticks for support in the water as well as gaining more speed on the even path. 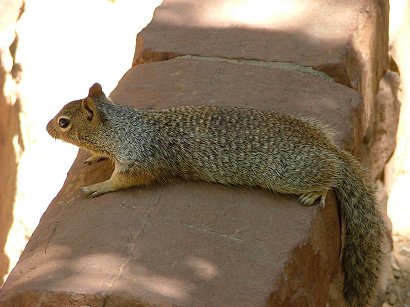 Squirrels are spread out all over that path. They are not afraid of people and some are pretty fat. Which leads to a thought that maybe not all visitors sustain from feeding them which is forbidden… 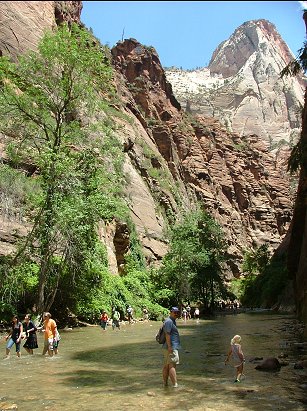 Here is the beginning of the trail in the water. Yes, very crowded even on a regular weekday. I guess main reasons being school holidays and kids like water. But nevertheless there was enough space for everyone. No accidents, peaceful strolling up and down the river, with some kids swimming in deeper places. We tried to find shallow passages so that our butts don’t get wet, though the water wasn’t cold at all. 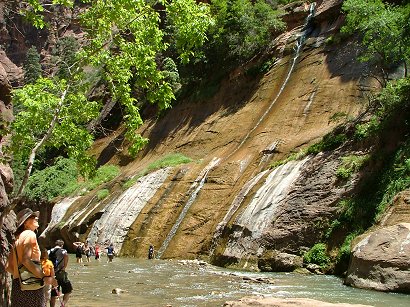 This is a very popular place for taking pictures – the stream rolling down the slope is very cute and refreshing. Sometimes you can even see the canyoneering people landing down the stream in zigzags while attached to ropes. This is also the place where the barefooted hikers finish their hike into the canyon. 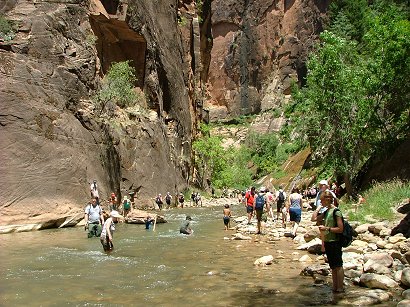 But on that particular day the crowds proceeded further. And it was beautiful, but not as beautiful as getting far more deeper into the narrows of the canyon as you will see. 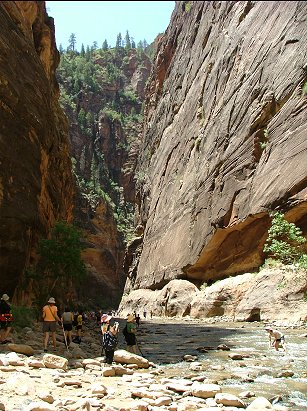 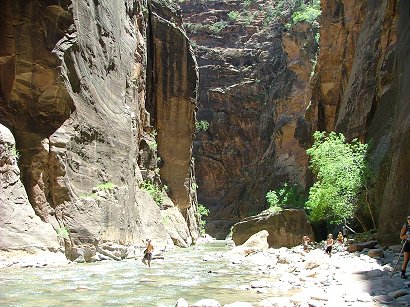 As seen in the pictures the sun was especially bright, which is usual here, but because it was July, not September, there was practically very little shade, it was beating us or caressing us (depending on perception), and a hot wind was blowing all through the canyon. So at that point I gave up, as never before, my body refused to walk further…way too hot even in the water. Thanks God my husband proceeded and he took those beautiful pictures of the narrows: 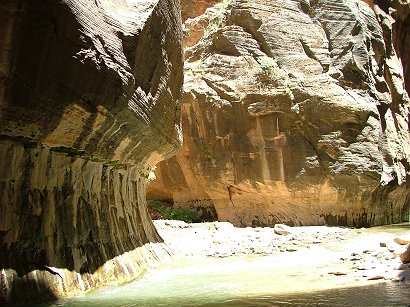 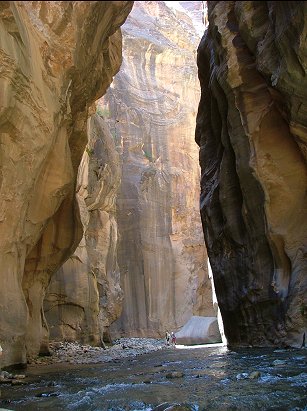 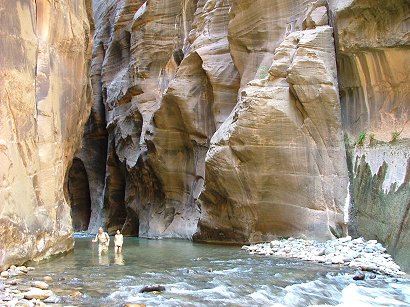 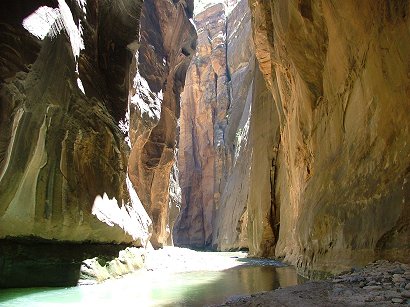 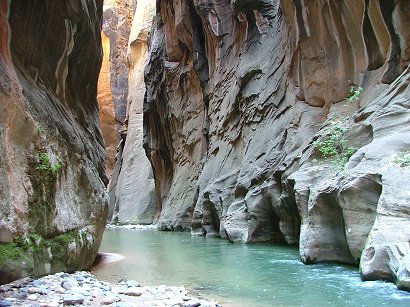 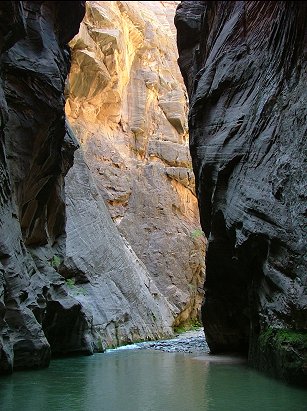 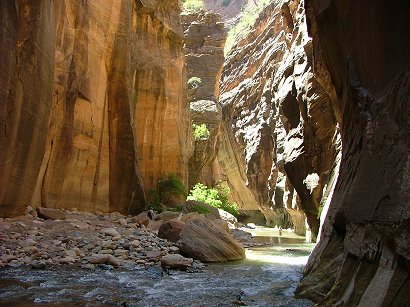 Isn’t it like in a fairy tale? And yes, there are no crowds any more, only the strongest can get a glimpse of the best views -fair like in fairy tales… 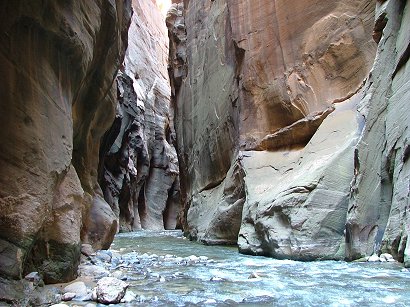 The view on the way back: 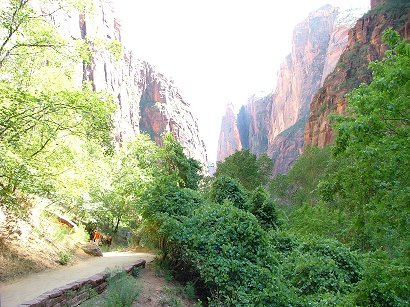 My sole advice for travelers in summer – try to start you day as early as you can. There is some though very little morning coolness, freshness. Try to capture and use it.