After a good breakfast at Pickled Onion, where they they really pickle onions, we drove to Uxmal Archeological site. It is a big site, like Chichen Itza, but much more beautiful! So if you have limited time to visit Maya pyramids – this is the one I would highly advice to visit, never Chichen. Though it is not so close to Cancun, but it is pretty close to Merida. We never drove more than 230 km per day, and most of the days we drove less than 200km. So the distances and not long there. sometimes the roads are not perfect. though I have to say – they are rebuilding so many roads that in a year or two this who peninsula will look like a perfect traveling destination. When asked if we felt safe during the trip – what could I say seeing French people driving on bikes with their babies attached in bike-cradles through the wilderness of Yucatan…And we felt safe, only had to slow down at military check points, which are arranged evidently because of drug wars still going in the North of Mexico. Also – saw some police or army trucks fully loaded with armed solders. But other than that we saw or heard or felt nothing scary. So here is the first view of of the main pyramid of Uxmal: 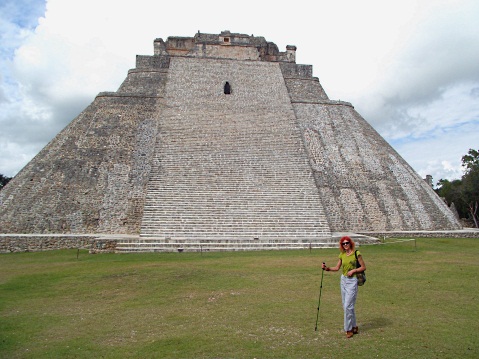 Because the pyramid is of an interesting form, here is the side view: 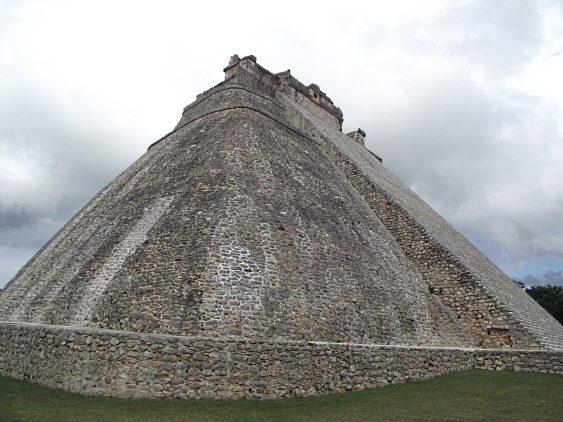 Can you see how steep it is? It was not permitted to climb up, but at least we could walk close by (unlike at Chichen where every building is fenced ). Also – the location is not flat. so some structures are higher, some lower, which makes for a very cozy anchient city setting: 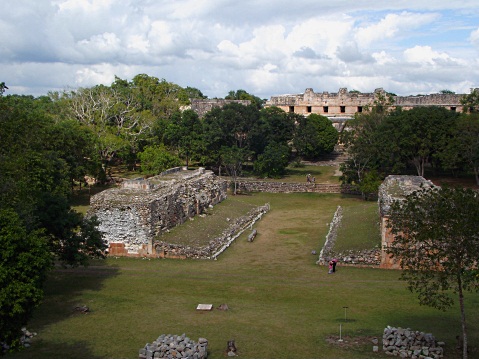 Their stadium is seen here – where ancient Mayas played some kind of game similar to football, but they couldn’t touch the ball with hands, only their bodies, shoulders and had to push it into a stone ring hanging on the side of the field wall. A very hard and brutal game as we understood. 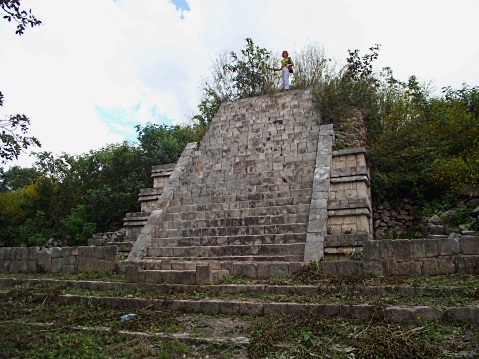 This little pyramid was built for the Kings’ mother-in .law. The special about it- it was permitted to climb it! 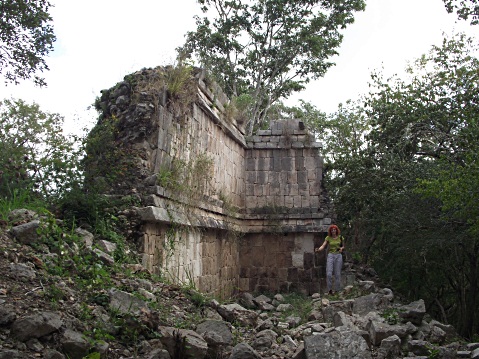 Evidently, everything the discoverers found of ancient cities was in ruins and overgrown by jungle. So all the nicer buildings or parts of them are diligently restored, with so much work sill waiting. 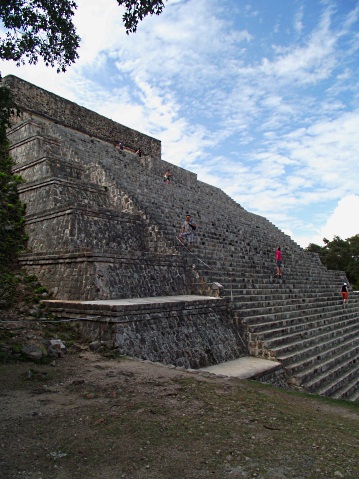 This is the highest pyramid we could climb there. There was usually a temple on each pyramid where their priests held their rituals, some of them being very cruel. I hope little Mayas didn’t have to climb those stairs very often/ because as I noticed earlier – the steps are very high and narrow, and t is a little scary to climb it: 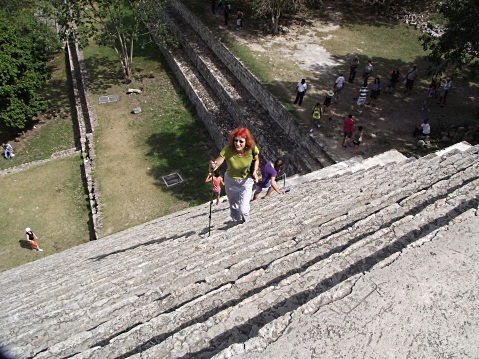 The views from above: 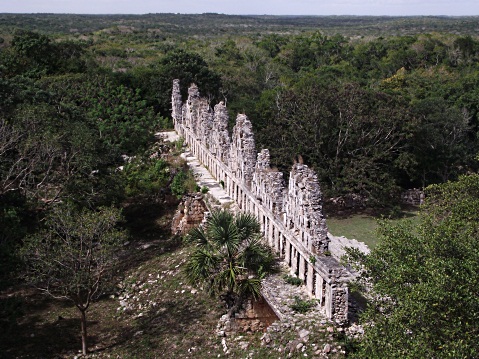 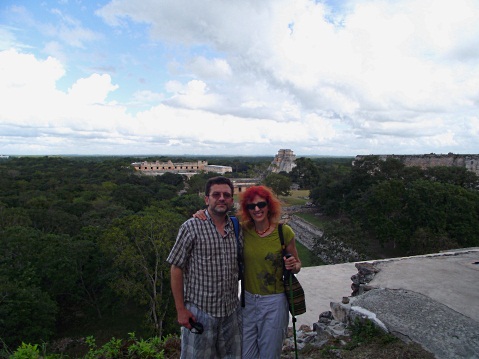 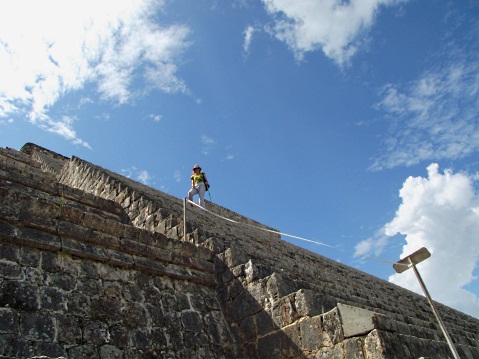 There were several courts or squares making that city and buildings surrounding them. They were decorated elaborately in their time and even what remained now pleased the eye: 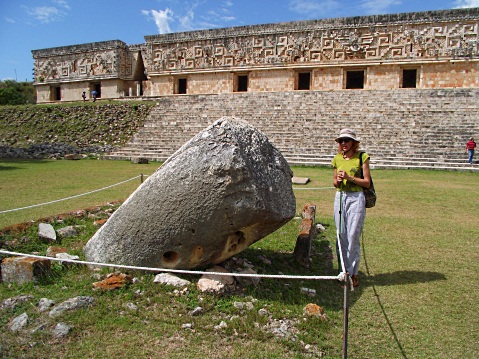 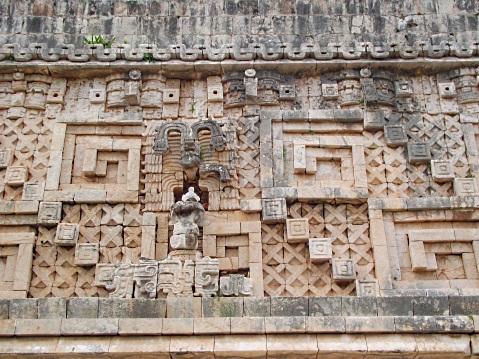 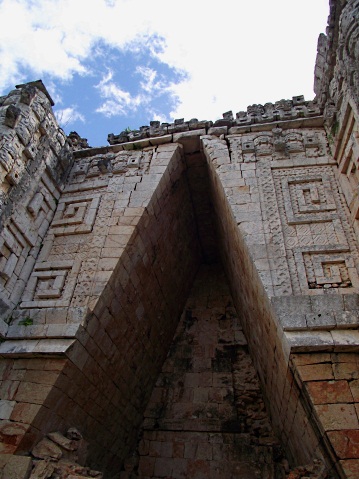 There is a way to know more about each building besides reading before the trip- To hire a guide, of which many are waiting by the entrances to those sites, speaking different languages. The cost is something around $40 for the whole excursion, as long as it takes. So it is more feasible to be with a small group. On the other hand – I didn’t even want to know too many facts about Maya history, for some are gruesome, some maybe noble, but…most of them travel to that drawer in ones memory box that is never opened…I just wanted to enjoy the city planning, the architecture, the masonry, the sculpture and feel the atmosphere, maybe even the energy. 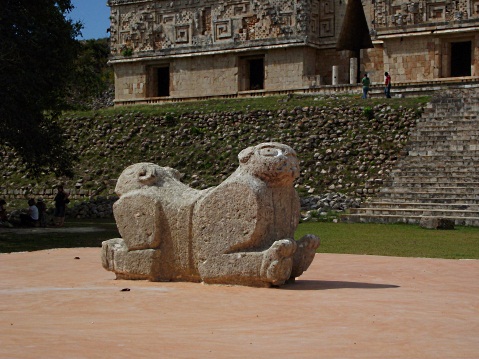 Sadly, but this two headed lion is not just for beauty. Girls to be sacrificed were on it -saw it in paintings in museums… 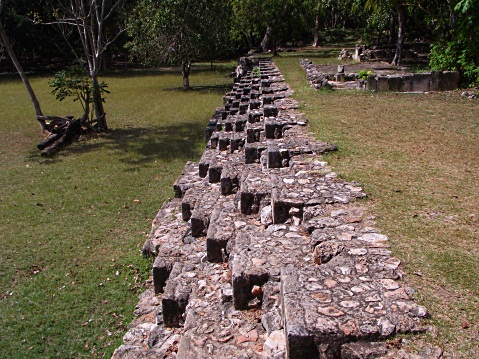 What a nice way to make stairs! Or maybe they were seats for sports spectators. The rhythm… 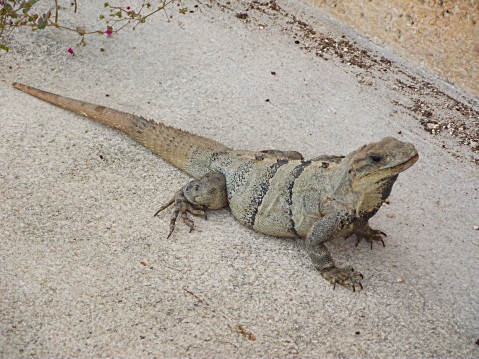 The main inhabitants of the abandoned cities – iguanas. They are everywhere, heating their bodies in the sun, eating plants and catching bugs, not afraid of us almost at all. 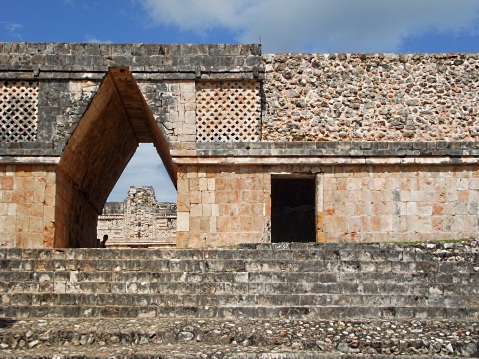 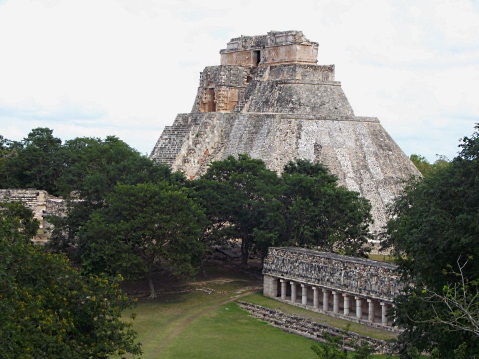 The last glimpse to the main pyramid from its back and we are off through the modern entrance-visitors center: 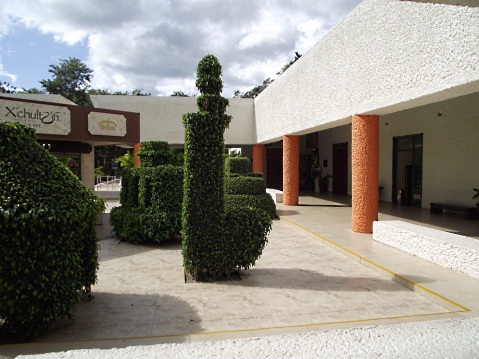 After looking through the pictures I am still amazed at their grandeur! While being there – it was so hot and humid (even in February), so the feelings for their beauty or energy are a little dulled. And you never stop marveling- who could build them? No, the theory that aliens helped ancient Mayas to build them is pure fiction. However our waiter said his grandpa met a tiny Jungle person at night – one of who were supposed to really help Mayas in their ordeal. Their version of Snow man, just very tiny. But when Mayas say tiny – he must be really tiny. But with strong stature and strong hands to carry stones. Who knows…