Mid July this summer we at last visited the Giant Trees. Sequoia Park and Kings Canyon are both connected, they are on the same entrance ticket, but you can’t see both of them in one day. So we had to land from the heights of the Sequoia Park at the end of the first day and go back up the next day to see Kings Canyon. The point is that it is hard to find a place to sleep in between them . As I noticed visitors mostly camp there. There are several lodges inside the parks, but to pay $350 for a night is not in our practice. And when you land from the Sierras there – there are maybe 2-3 motels on the way, not good at all, therefore they have vacancies. And then nothing, a long stretch of driving with orchards, with towns who serve the orchards – and no motels hotels, very strange…the closest city came out to be Fresno, though with the help of people from supermarket we managed to find a Best Western somewhere in between those orchard – little town jungles. So this is my introduction to the Giant Tree impressions…Some facts impress more than others…:-)

But here is everything from the beginning. We drove through Las Vegas, then towards Bakersfield. California’s attention to renewable energy sources impresses: 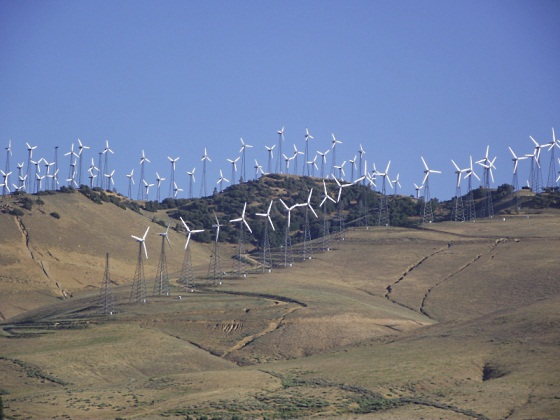 After a night in Bakersfield we headed towards Sierra Nevada foothills from the West side and started rising towards Sequoias on Rt.198 : 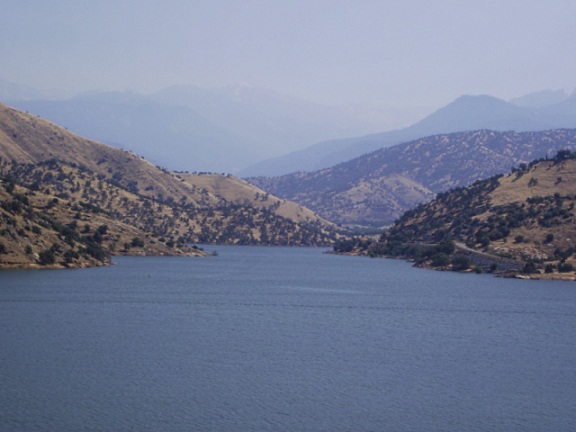 The mountains are in haze and they say that partially it is because of the smog that is brought by winds from San JoaquinValley and partially from the humidity in the air in summer. they sau to see clear views you have to come in early spring. The road up the mountains is narrow and winding which you can expect. The views are beautiful Part of the road was being fixed, so we had to wait and meanwhile we thought that we already reached the Giant Tree grove: 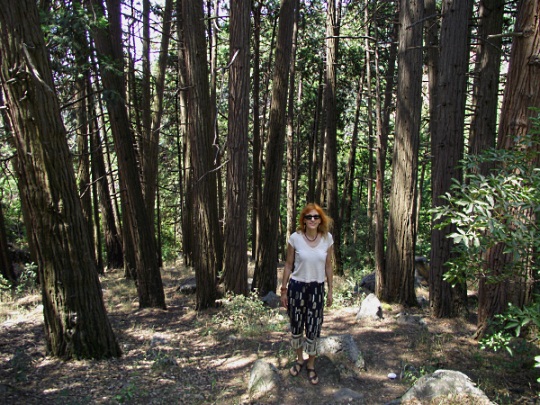 But we haven’t. Those trees were something else, not sequoias yet. Sequoias grow very high – between 5000-7000 feet elevation, which is 1500-2100m in human language. They don’t grow grow on sea level as their cousins Redwoods, as well as they have other differences with redwoods, which i didn’t know before going to the park. Redwoods are a little taller, their trunks are not so massive and they die by 1200 years younger. Whereas sequoias are much more massive, they reach 100 m in height (311 ft) and 14m in diameter (40 ft) and they live up to 3200 years old! That is something… 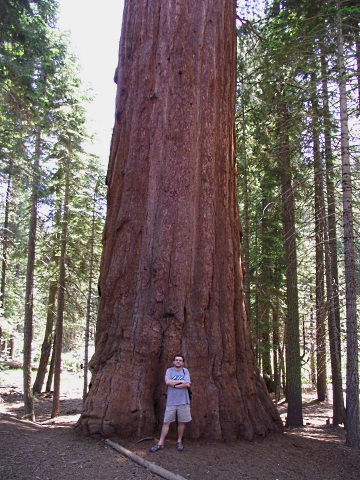 They outlive many forest fires because of the structure of their bark – it is thick and feels like tissue paper, soft and airy, and though fires sometimes burn holes in them – the heat still doesn’t get the deeper layers. Their wood and bark have some chemicals that make them resistant to fungi and bacteria. Luckily. 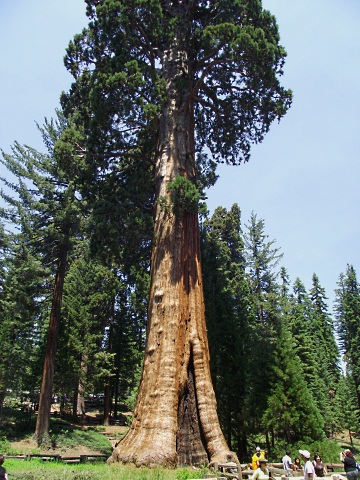 And when you think – there are some 75 groves left in all… and all of them are on the West slope of Sierras, where the moisture comes from far away ocean to humidify its branches and the streams of the mountains feed them with water of which they need a lot.

From the Giant Forest Museum we took a shuttle to Moro Rock. Again there was a confusion. The next stop was Crescent Meadow and we planned to see the views from there and return to Moro Rock and climb it/ No way. the shuttle takes you to the Rock, then to meadows and back to the museum…So we did two rounds until we managed to climb the Rock, but on the way we saw this creature: 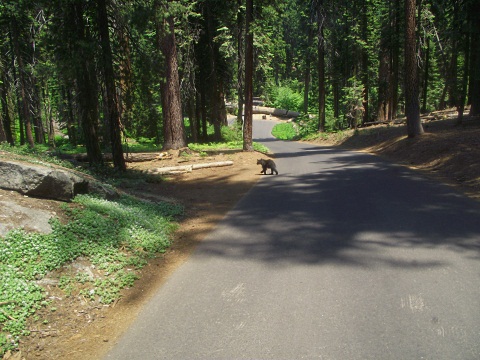 I felt good we were in the bus not on our feet – because mama bear could be close by. 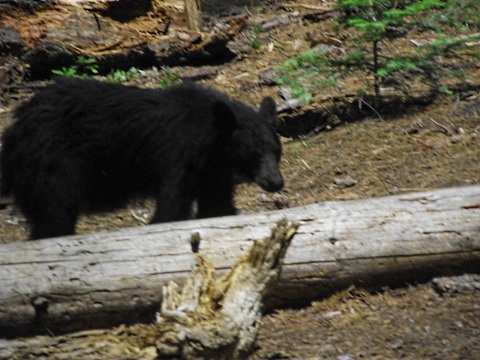 Moro Rock was impressive, reminded me of Angel’s Landing in Zion NP, only more comfortable steps for climbing it. So the same as on Angel’s Landing I was scared to death to reach the top :-): 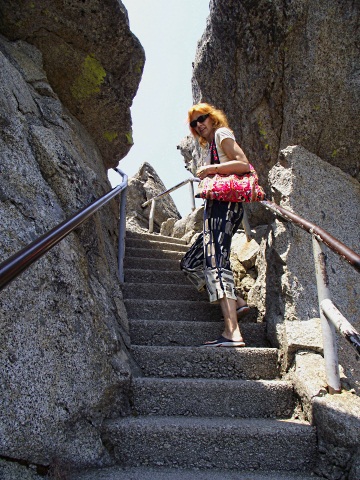 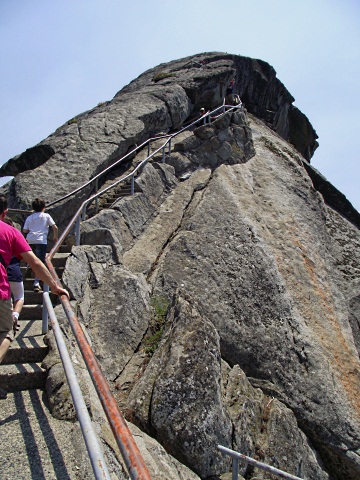 Thanks God Andrei reached the top and could enjoy the views of Sierra Nevada mountains: 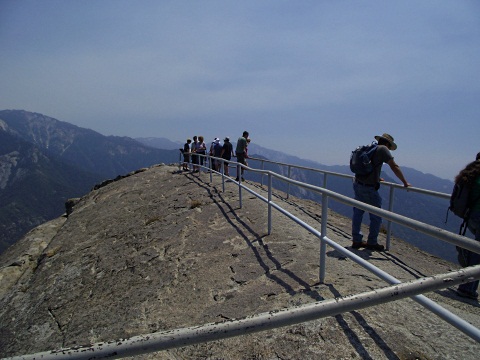 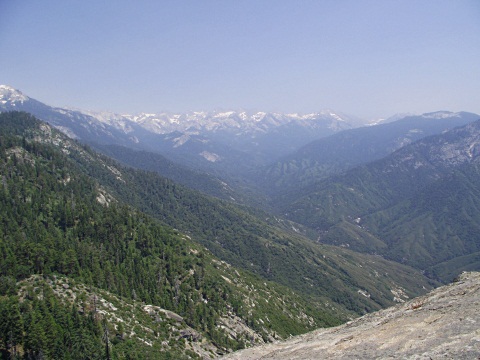 Next stop was at Big Trees trail – sequoias grow usually around a little pond formed in a hollow of a big stone by some streams. they need water. Those ponds usually are not ponds any more, but a swamp or wet meadow. And therefore sequoia groves look like a circle: 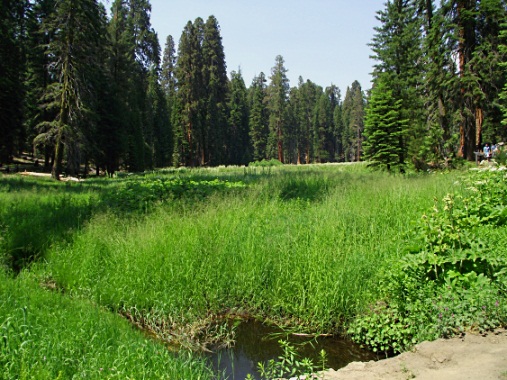 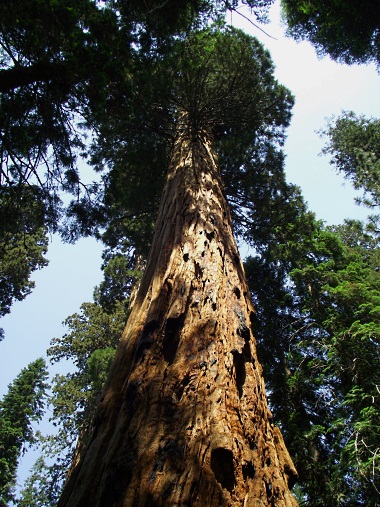 The main cause of sequoias deaths is toppling. They have shallow root system and strong winds can uproot them: 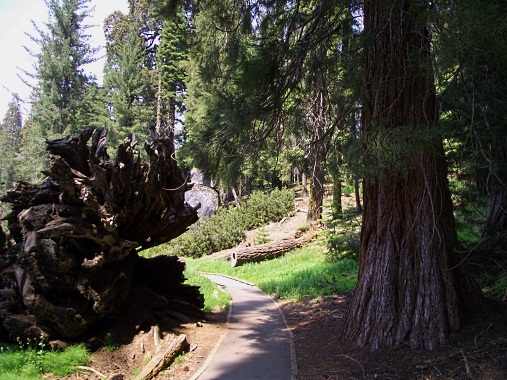 The insides of the fallen trees are attractive: 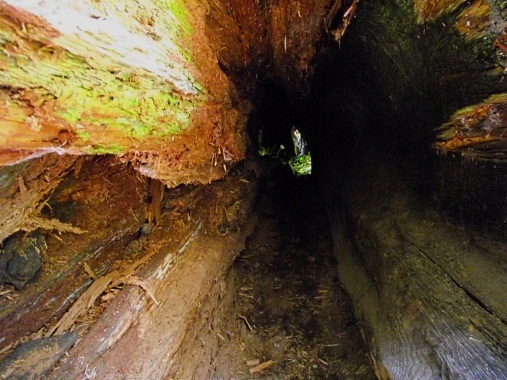 Some more images of the Giant Trees. the biggest of them is General Sherman tree, but we saw it only from far away – too many people were crowding around it. 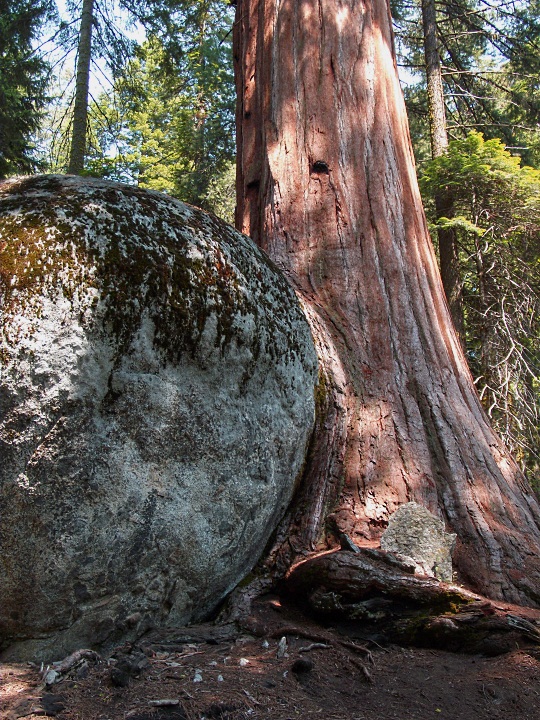 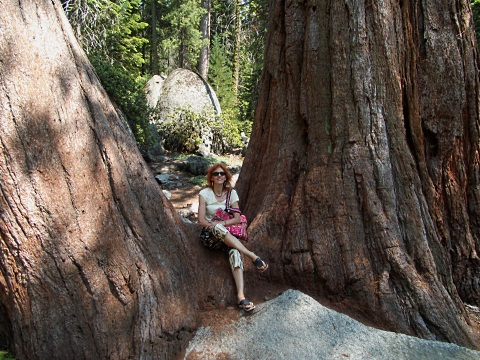 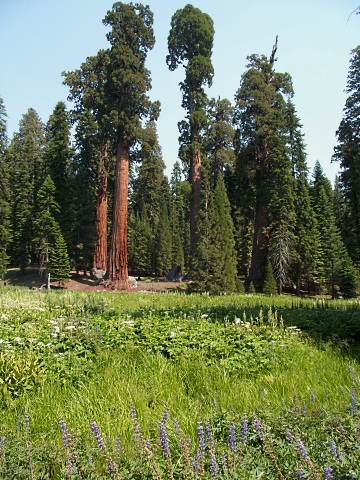 So much for this park, it took us a while to find a place to sleep that night as I have mentioned. Next Blog will be about Kings canyon.