It was the 12th of March and we were planning to see more of those wonderful Pyrenees, but the morning was not promising at all. It was raining cats and dogs…Non stop. The clouds low in the sky…So here we are in Balaguer, which we didn’t manage to see yesterday for it got dark, we saw only the river in front of our hotel: 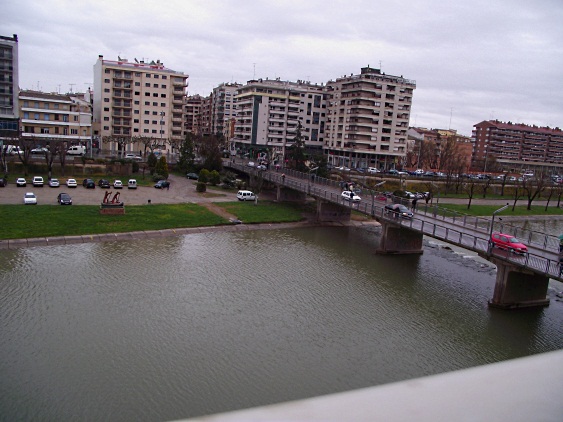 We had to park the car on the other side of the bridge on a street and then come to this side and stay in a hotel here because there was the only hotel in sight. But it was literally in the old part of the town which is usually the place of interest. So in the morning, in the pouring rain we walked a little in the central square of the town: 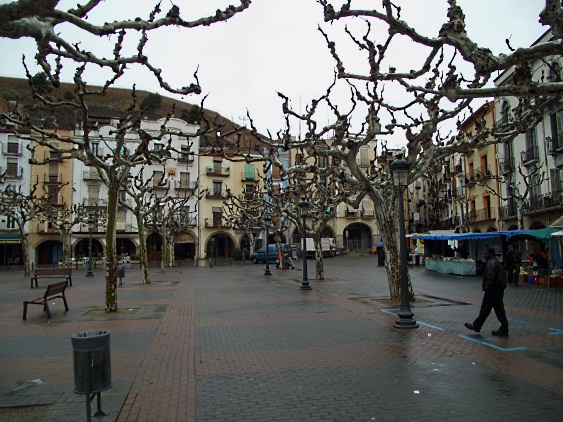 The square was empty of cars for a reason it was Saturday – a farmers’ market for the town, so the cars had to leave the square for trade booths making it much more attractive. The traders were also not in a hurry – who is going to rush on such a morning…

Through the corner of the square we went up towards the wall that was seen from the central square (there over the square you can see a grey top line- that is a wall bordering maybe a monastery or a castle on top of the city) but I was scared to climb the stairs, them being so wet and also – very high…and so I didn’t see their big cathedral from close by, only from the bottom of the hill: 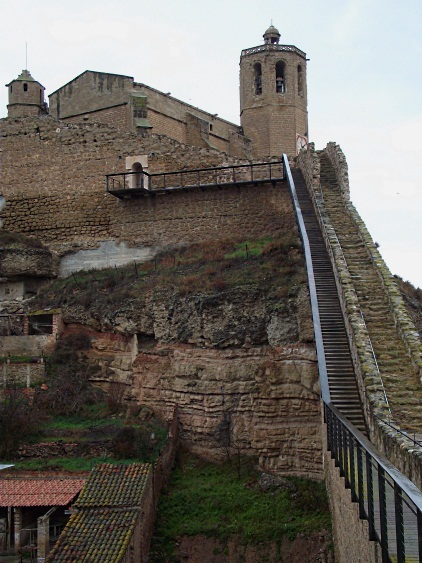 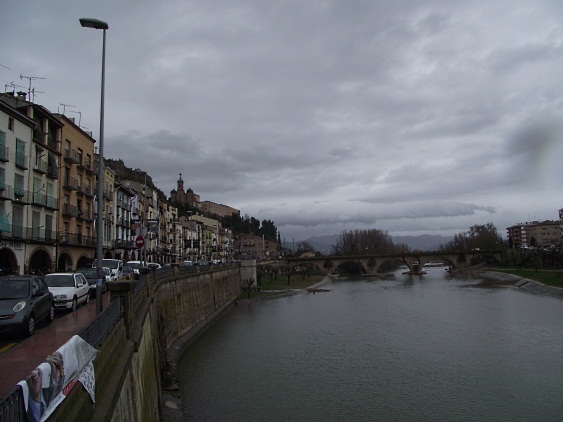 Another old bridge and church with a monastery were seen further, so this city could have been an interesting place to investigate if not for that rain and our crazy plans to see Pyrenees one more time… So we kept to our plan and drove through those low clouds in the mountains that started pretty soon after we left Balaguer. Lots of cars were returning back towards civilization form their ski resorts – skis on tops of the cars. But we didn’t accept it as a sign and diligently drove to La Seu d’Urgel where we met the nicest Spanish guy during the whole trip – in a visitor’s center. He gave us maps and assured that we can cross some mountains towards Berga where we also very mistakenly made a reservation for that night…He said the mountain road is good and the views are perfect. Just as we needed…But this rain…So we walked a little in La Seu: 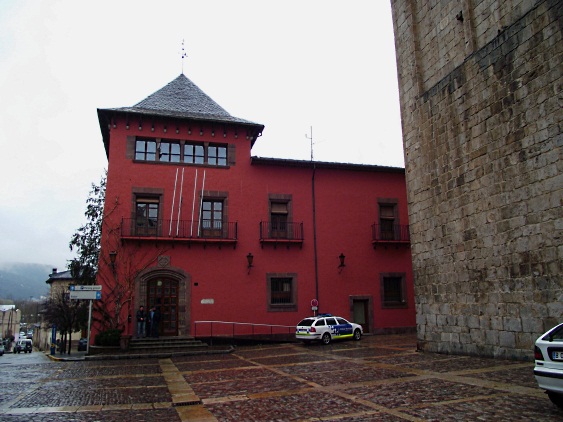 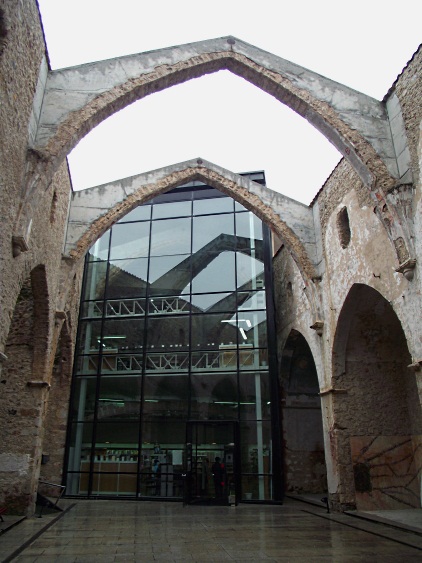 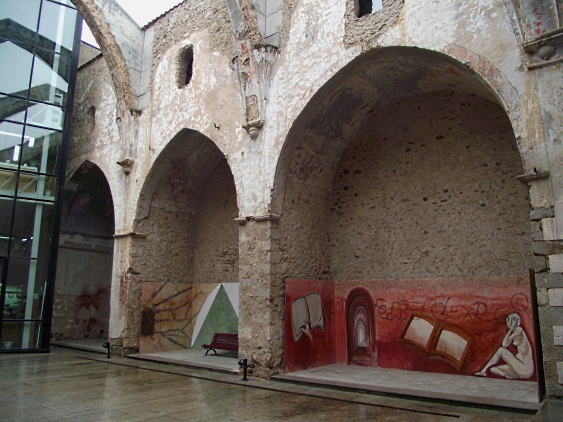 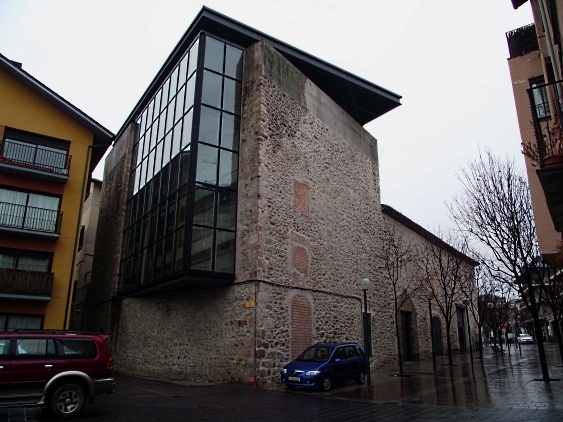 And had lunch…That is it in La Seu, we rushed to manage to cross that part of the mountains, naive us…I remember asking the guy – won’t this rain turn into snow high up in the mountains. He said it is too late to snow over there in mid March. And here is what we got into: 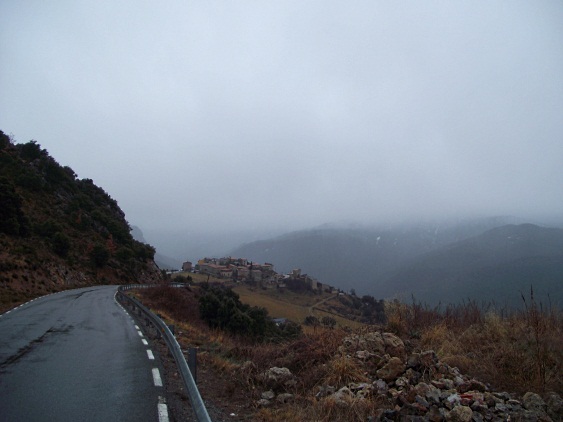 Yes, the couple of towns we saw on the way were very picture perfect -on a sunny day, of course. 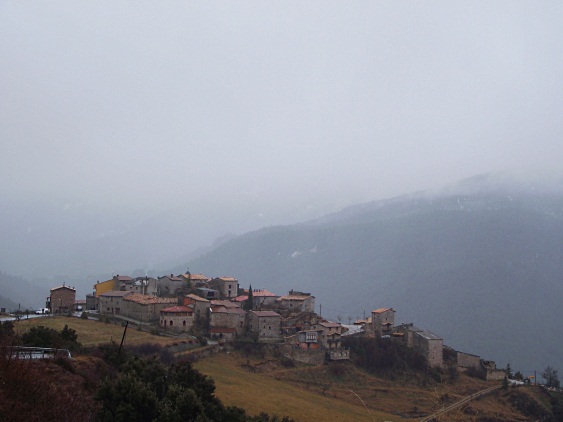 Pubol, a vi;;age where Picaso painted for one summer was supposed to be on the way, that was the main incentive to drive on the crazy narrow, windy and wet road. I guess Pubol looks similar to this…But i can only guess because after struggling for 2 hours and making 40 km the snow was already dripping onto the car and road and it was not melting any more…Being completely alone on the road – it was not reasonable to continue…The only prize we got was this view: 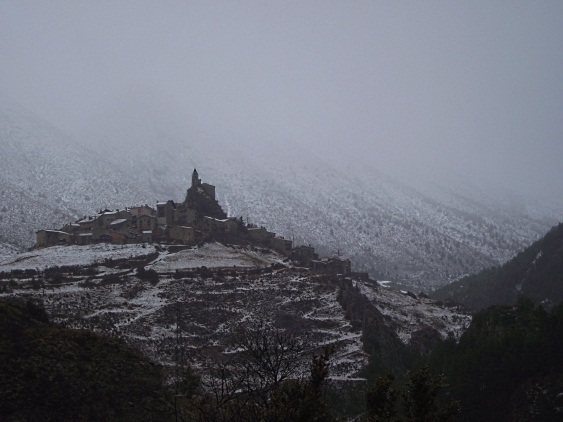 This was the only town we saw past Tuxen and didn’t dare driving further. In Tuxen we still investigated if we could reach Berga on another mountain route. People in the only restaurant said we could, but after giving it a try we still had to turn around and return to La Seu and do all the round trip on better roads all the way to Berga…That was not a very good day, especially for Andrei, to do all that driving on those windy roads – it was not fun at all. But we figured out that it is an interesting and beautiful place to visit a little later in spring or summer: 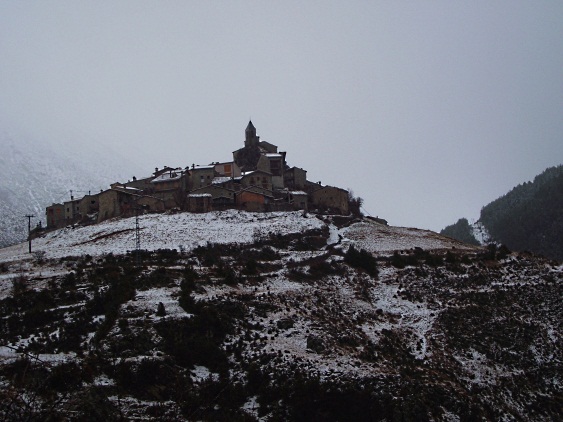