This winter we worked in our garden, orchard really hard to find at least one day of time and go skiing. The other thing we have to figure out before going – is the right weather. Because so many days here may be fine and sunny. Whereas over there, only 1.5 hours north from Zion – it may snow, the winds may be unbearable, etc. And it may also be very cold. The mountains in Brian Head are 9000 Ft height. Some even higher. So we figured only one day that suited us and it was February 7th, a day after Andrei’s Birthday, that is how he wanted to celebrate: 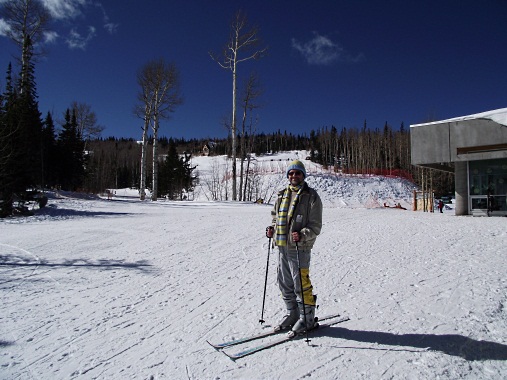 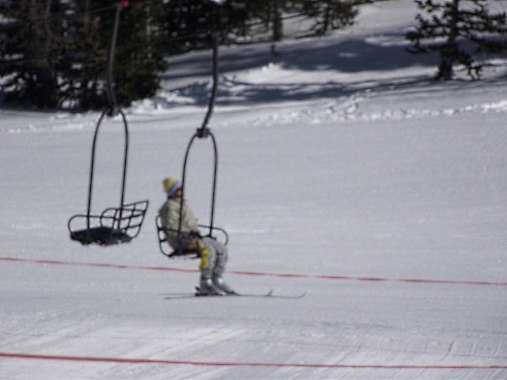 Even after finding one of the warmest days in February, it wasn’t very warm and the winds were fierce, especially closer to later afternoon. it takes us 10 min to sit on the chair lift until we get to the top of the mountain and boy those 10 min are cold and boring…One time I took the camera to take the pics from the whole trip up and down. Here are the views going up Navajo mountain (there is also Giants Steps mountain- another lift system): 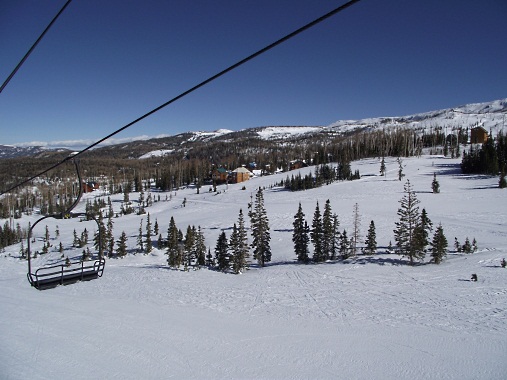 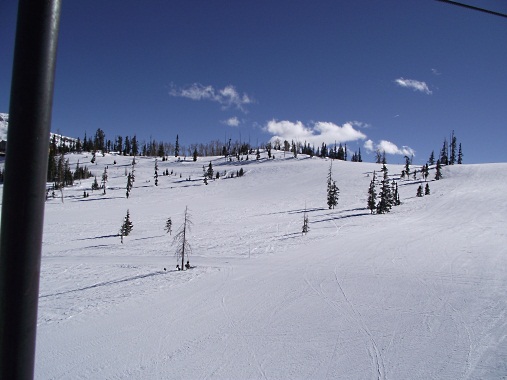 The summit of Navajo Mountain: 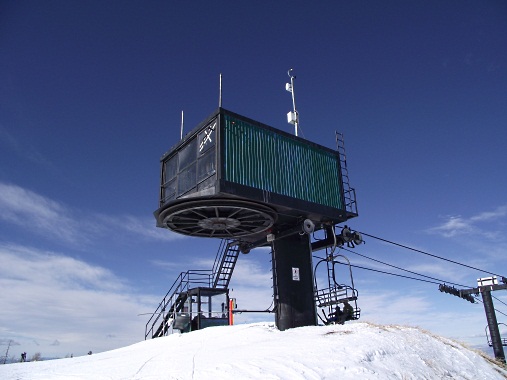 The view from the summit. Red slopes of some lower mountains can be vaguely seen in the far distance, by them you know you are in Utah : 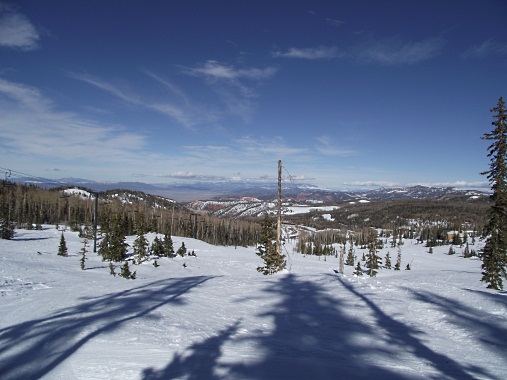 This is the beginning of the slope once you get from the lift: 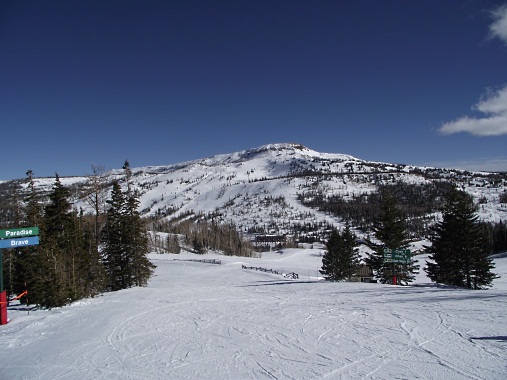 Then you can take different trails, different directions, I prefer in the middle of the forest: 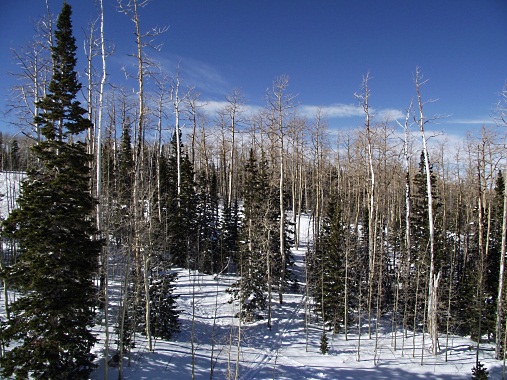 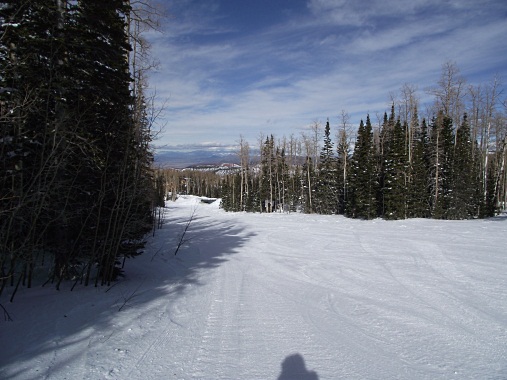 There are houses here and there, I bed real big lovers of skiing own them, and one of the owners was not lazy or had enough time to build this cottage on a hens leg from fairy tails like it belongs to a witch : 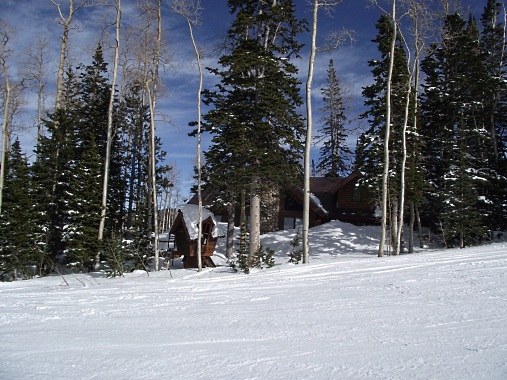 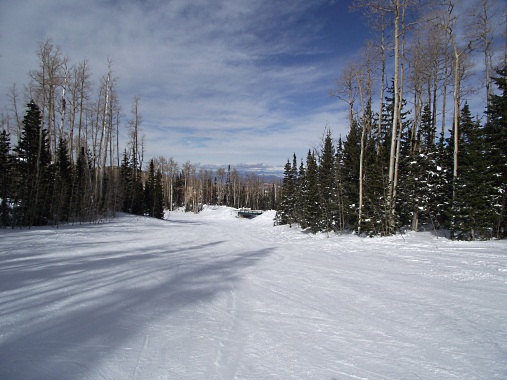 Then you dive under a bridge in the far end and the last part is really fun – steeper and also even, no bumps or pits, fantastic ski slopes I should say.

Not to walk to the bottom of the big ski lift we first take the small lift – for starters and kids, called Pioneer lift and from there we proceed down toward the start of the big Navajo lif. The Pioneer slope looks like this: 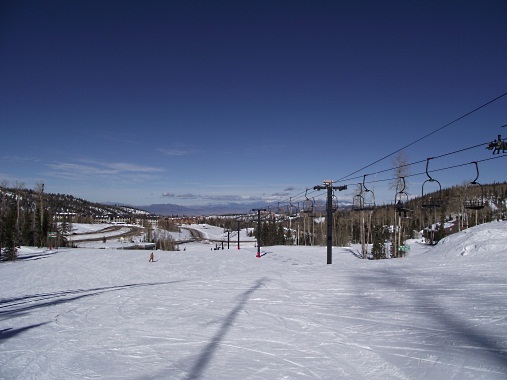 And the turn towards big lift is here: 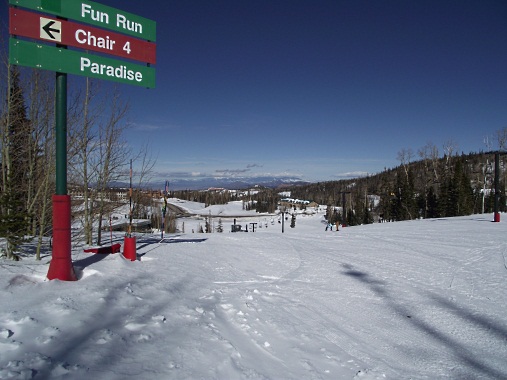 And here a I am coming to the finish of the day: 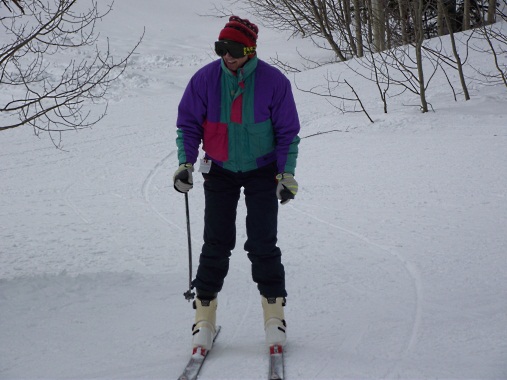 The best time to ski in Brian Head to my mind is March and April until they stay open. But then during the day the snow can get wet. In February the slopes are wonderful, but you have to be very careful choosing the weather. Two years ago I remember going there from our sunny and warm Zion, buying tickets and managing to do only one landing…The snow storm and winds were unbearable…

P.S. I haven’t posted this till now, April 1st. And it is not April Fools :-). We were skiing in Brian Head yesterday, it was rather warm because we are havign a warm spell here in Utah, but the winds on the top of the mountain were still very strong, they even stopped us at certain parts of the trails and certainly didn’t let you go down fast. As my goal on a mountain is to train myself into better movements, more gracious and all, and Andrei’s goal is to get the excitement of going down fast – I was satisfied enough and he was not that much. And yes, the snow was already wet, but closer to the evening it got dry again.

It is nice to be there in Brian Head -you can leave your skis, nobody will take them, eat, have some rest by the central building on cozy benches, but one thing…Americans consider themselves clean people. They wash their hair every day. And here in Brian Head – every time I sit to eat by the table outside – some families especially with babies – they put their shoes, boots on the tables!!! and one of them goes skiing, the other takes care of a baby, but the boots stay the whole time on the table. As if someone will kick their boots from the floor, as if the boots don’t belong to a floor…or at least – a bench, which I also am doubtful if they do…but on the same table where we put food, where we put a book to read…The same boots with which they go through the dirty pavements – snow melted, so roads are really dirty with all the remnants of salt and black dirt; boots with which they go to the bathroom. I am really shocked at that and even if I tell them about it- they don’t care, never take their boots off the table as if they are some precious sculpture. This is not one case already, makes me sad. But maybe there is something in some of their culture (not to offend the clean and neat ones that I also met in bigger numbers, thanks God)- I remember my roommates in Maine were keeping their shoes on their beds…The only positive part – they usually collect after their dogs, unlike in Europe, but I am wondering- why some people are super scared of bacterias, of contamination, while others are supplying them on eating surfaces without any reason at all.

(This was an interruption of my writings about Spain. Expect them to be continued in my next Blog.)