The last trip we did while in Chang Mai was up the only mountain close to the city to the temple there- Doi Suthep. it is not on top of the mountain, just on the way to the top. Somewhere in between. The road was winding up for a while in the jungle and here it was a usual market place where we got out of songthaew – their transportation that I call “animal wagons”…But in reality they are converted pick-up trucks with two benches in the back and a metal roof. The ones that take you to Doi Suthep are parked on a street by the North Gate of Chang Mai Old town walls.

It was Saturday. As I noticed the most celebrated day by Thailand Buddhists though they all say that in their religion all days are the same, they don’t have a special day for temple and rest – like Christians have Sunday. But somehow Saturdays were always crowded with people in temples. Once you get off the transport in that market area – you have to carefully look around to figure out where the gate to the temple is. There are Buddhas everywhere and you can get confused. Here is how the stairs up that place on the mountain slope where the temple is look like: 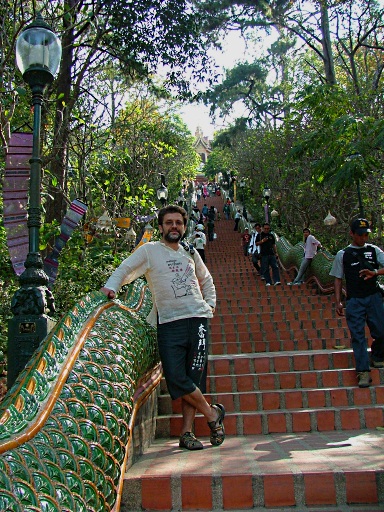 And when you reach it – there are two terraces around the temple on lower levels with activities going on – trade, as usual, dancing, selling tickets for non natives, monastery with rooms for discussions, toilets, etc. Yes, toilets have a very important part in their temple grounds – they always are there, always clean, so it makes the visit more pleasant and comfortable. So before you go through the third gate and stairs to the highest level – there is an enclosed yard where lots of dancing is going on. And that part was the most impressive to me: 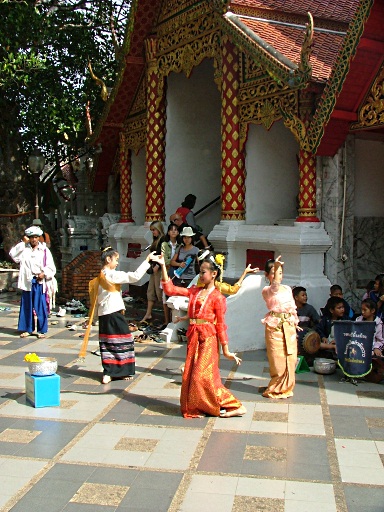 I think those girls were close to 15 or even 16, very gracious, tiny and slim with beautiful clothes – they were like temple princesses: 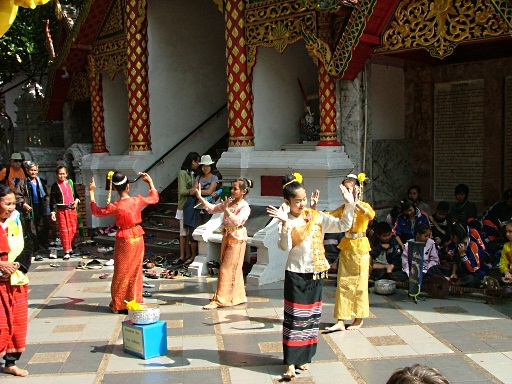 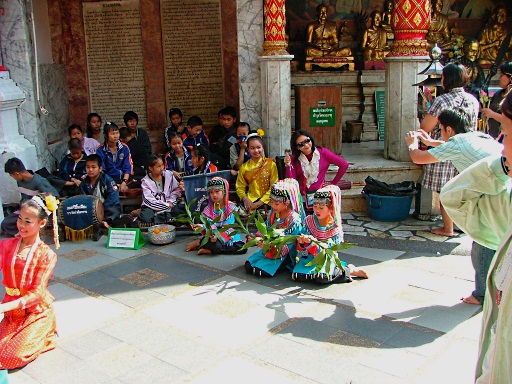 The other kids were also dressed up and singing. Usually there was one star -the really talented dancer, whose poses, movements of fingers and eyes were standing out. But at least those older girls had breaks in between each dance, they would go away. get a drink, sit somewhere. This next little girl – to me she looked like a toddler – she danced non stop all the time we were there. So beautiful so graceful so well acting, that I couldn’t be interested more in anything else. Those girls to me are the top of Thai culture – to be so strong, composed, coordinated, while still a child, I couldn’t believe in such a spirit… 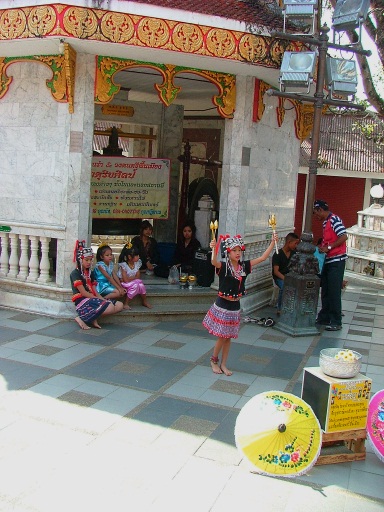 For some dances she had other girls dancing with her but none of them came even close to the main girl’s movements. poses, facial expressions, none: 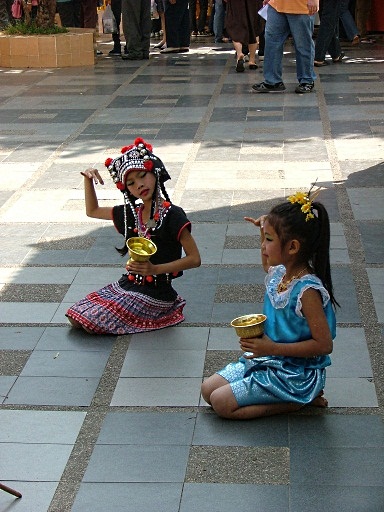 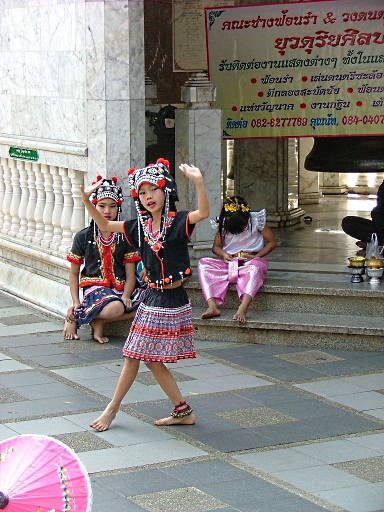 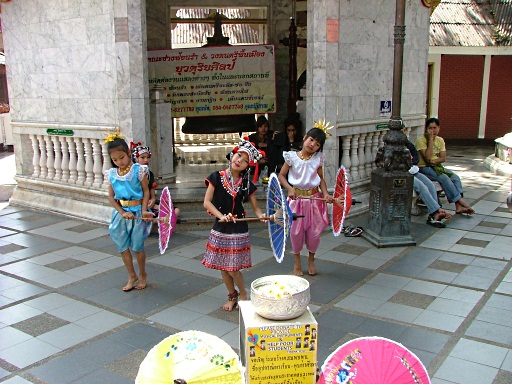 I wish this little “ballerina” has a future better than her country can provide her with…In moments like this I wish i worked in movie industry. Maybe I could find a way of getting her into staring in some movie, or getting into some good dance group. 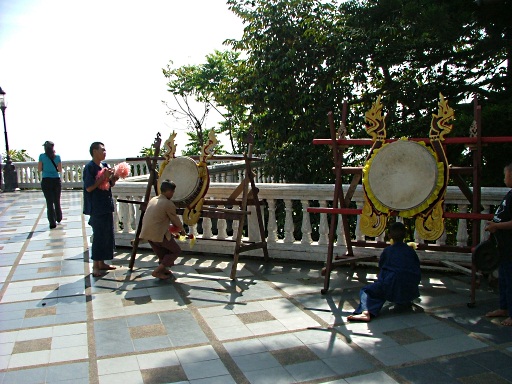 and as usual – lots and lots of sculptures: 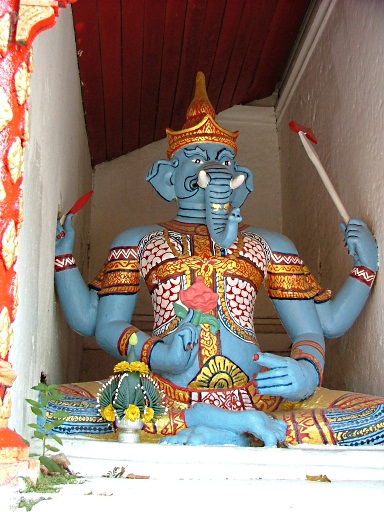 while on the very top level of the grounds where the golden stupa was in the center – supposedly with some ashes of Buddha himself – the crowds were walking and walking around the stupa with a lotus flower, some candles and some incense sticks in their hands.: 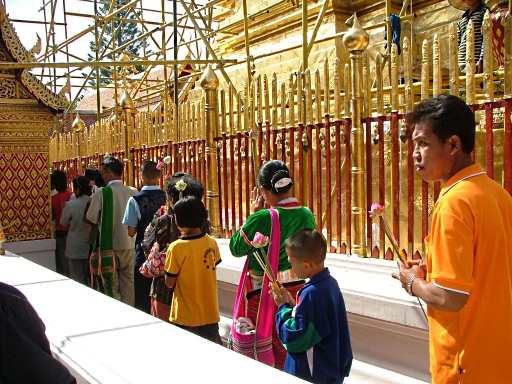 After going back down to the city, it takes around half hour to go back – I still walked around bearing the heat. Noticed an old stupa by some temple on the other side of the mound – so I managed to cross the busy street, which is not so easy, no traffic lights, the cars are driving like in a stream. And here I heard a strange music , saw an interesting and beautiful temple complex: 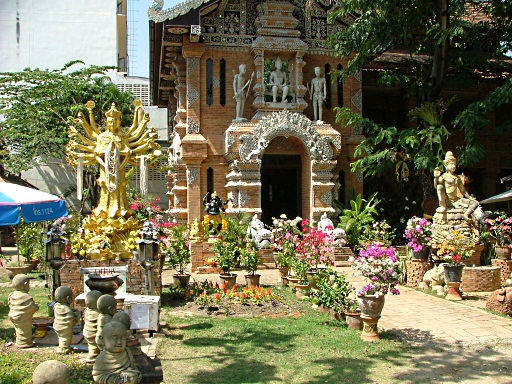 with some creative artsfrom local branches on the walls: 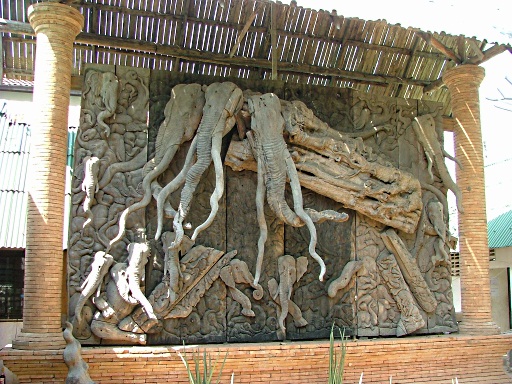 But the main point was a strange structure by the corner of the yard on dusty grounds, with cars parked close by-which I distinguished as a wake. The coffin was with that same roof that their temples have and all surrounded with color matched chrysanthemums, other flowers, with a little table in front which had a picture of a deceased young man and some food on plates for his spirit: 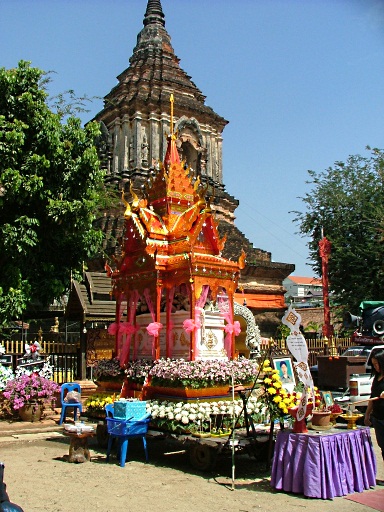 Nobody was close to tat coffin, except for the loud speakers set up on a car broadcasting their national music which had joy and sadness all together: 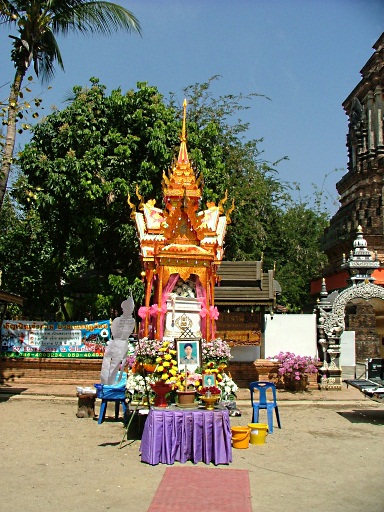 Deeper under the trees, in the shade, fro the heat in sun is unbearable, there were tables set up and a group of people eating, who I assumed were the participants of the funeral. I saw the caterers gathering their stuff and closing up the eating part but was not sure how long will other ceremonies last so i didn’t wait for the funeral to start. It was really very hot. Like my friend said – you are a prisoner of heat there during the daytime.

And here is my last picture of Chang Mai: 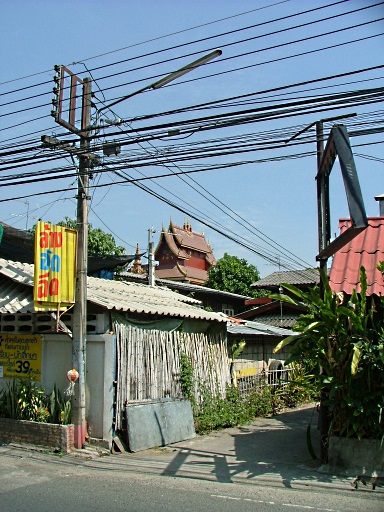 Poor huts, fancy temples and a lot of electrical lines…