Yes, we had to drive from highway 59 directly through Hildale and Colorado city – I have no clue where one ends and the other starts. To the very corner of them where the mountains are letting out a small stream. The road has the same name – Whitewater canyon, so there is no way of getting lost. But then it gets bad, really bumpy and in places like a ditch. In spite of that we managed to reach the very end of it – a small parking place with several big trucks there already. Some people from around here don’t believe in driving smaller cars when not carrying big loads…At some point, I guess, the gas prices will change the belief system. And there we started – on a very sandy path by the stream. To tell the truth – it was not an easy walk, not so much up, mostly a little up and down, but the sand made you feel as if you are in a bad dream sliding back with each step. It was the end of April, so there were cacti blooming: 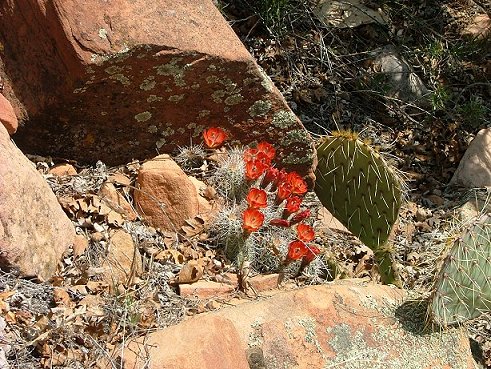 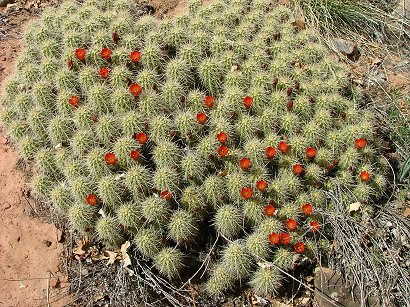 Being careful not to step on some prickly ones little by little we reached the main feature – the narrow part of the canyon with a little waterfall and steep rocks: 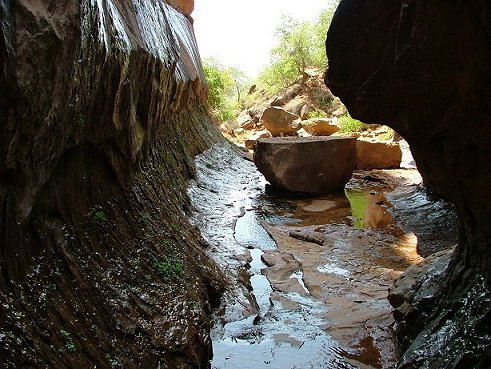 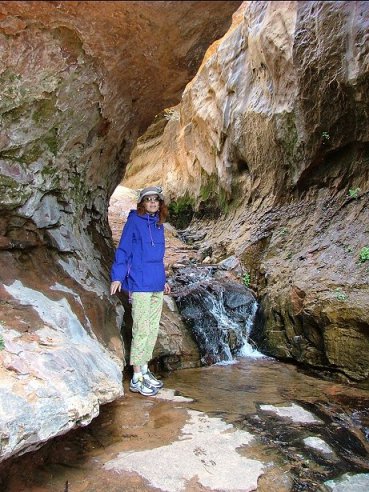 This was the view in front of us: 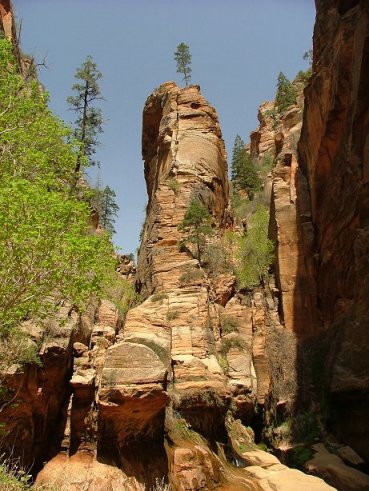 Pretty. But we had to pursue our trip upwards. It was tricky to find which side of the steep canyon to climb, where was a passable route. On the left side. So here we climbed it and continued to walk on slick rock ( and believe me – it is much more comfortable than sand) and then again sand-rock-cacti, bushes, up and up the slope of the canyon towards the pines we could see on its edge. 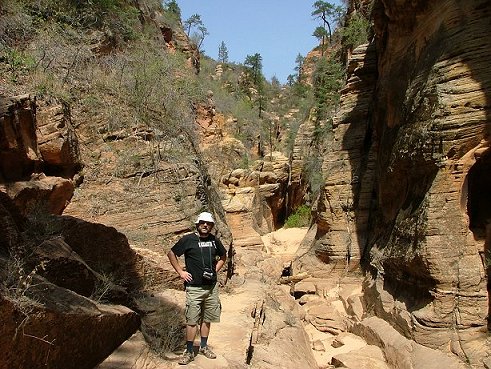 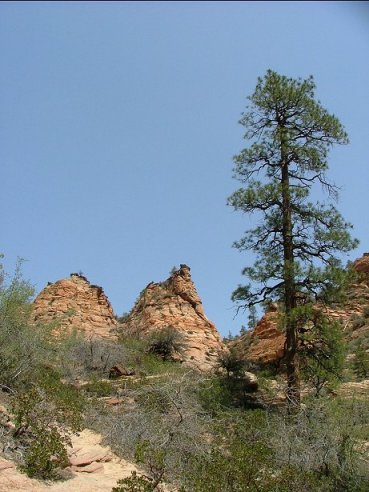 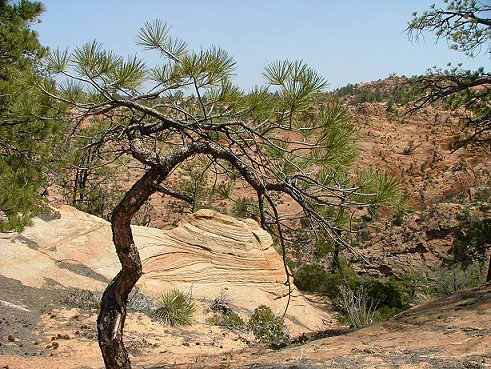 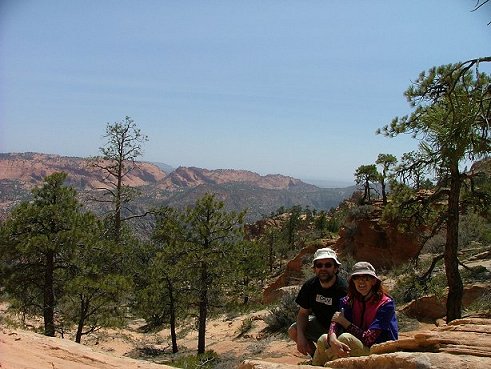 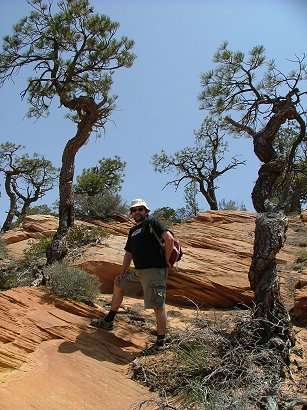 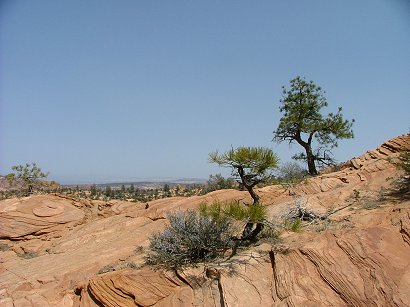 So we still went further up a little till we reached a real edge of that mountain facing the vistas to the other side. Though the latter ones looked the same – this or that side. Red mountains in far distance, perfectly clear skies, that is what Southern Utah is.

And then we descended the same way we came up, except that the views always look a little different and it is now harder on your knees not as much on your lungs: 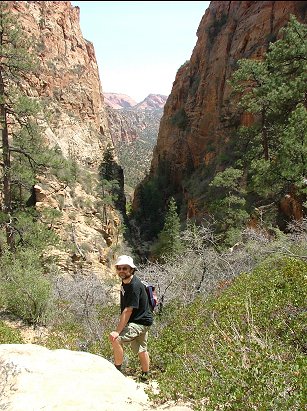 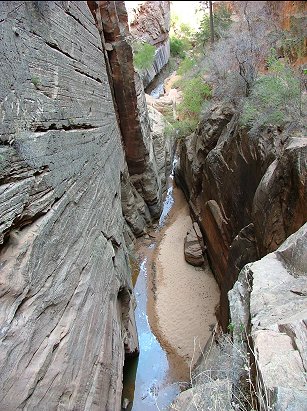 And then we lifted our heads and noticed an arch high up on the left side of canyon wall looking towards descend, towards Colorado city: 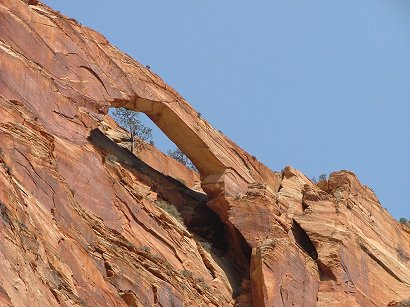 Some adventurous people we met on the trail hiked there to have fun walking on it…not us. I wish we could see them over there while we were taking pictures, but to no luck.

And here we were again passing the cacti: 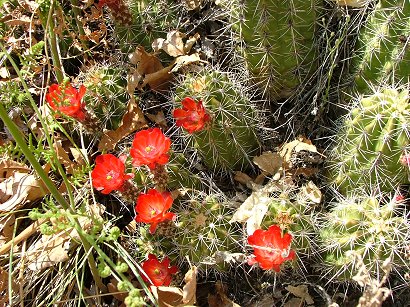 crossing Colorado city with its huge homes with multiple wives: 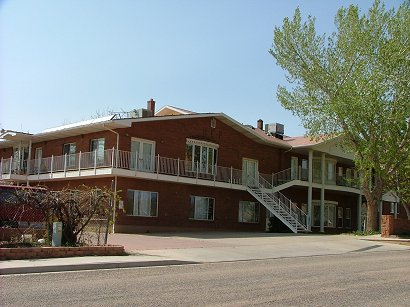 and back to our not so big home though it is also a B&B. We reached our Rockville via a back road which is not so good as driving through Hurricane, but is very picturesque: 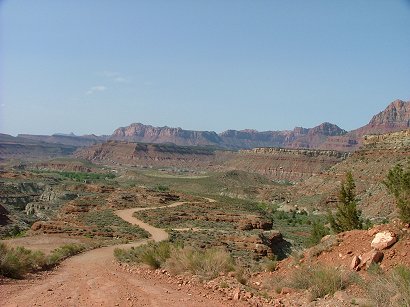