The whole Yucatan Peninsula is dotted with Maya archeological sites, most of which have still surviving pyramids. Mayan culture flourished several centuries B.C. and till about 12-13th centuries A.D. They still managed to show a strong resistance when Spaniards came to conquer them in the 17th c. Their architecture, arts, math, astronomical knowledge and the hieroglyphs they left on their structures are outstanding. More about their culture look here.

We got up earlier than usual and rushed to Chichen-Itza, the most advertised, considered the biggest pyramid complex or archeological site as they call it correctly in Yucatan. It was 1 h. drive from Valladolid, with all the villages on our way which means lots of “vibrators” and speed bumps, called “topez” in Spanish, on the road. And that translates to a very slow speed on their roads. Only some highways, of which the one we came to Valladolid, are pleasant and easy to drive. To tell the truth I was very excited to see Chichen-Itza, it sounds in everyone’s mouth when they come from Cancun, it is considered one of the seven wonders of the world, UNESCO World Heritage site, I heard about special feelings or energies over there and the ticket is the most expensive of all the pyramids we visited. So that gave us hope that it will be really impressive. Here it is, the Queen, the main pyramid of the site, the main Energy provider: 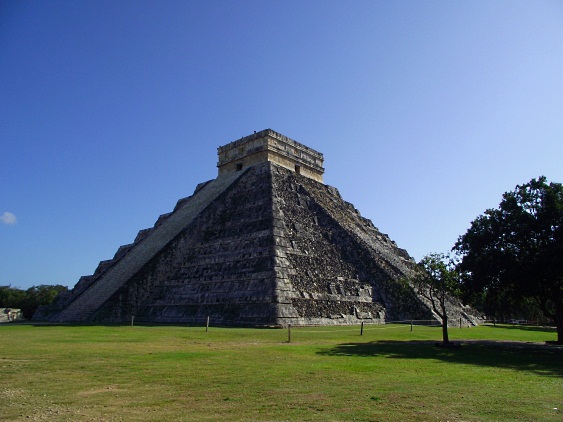 So it looks all right. Very well lined South-North-West-East, very nice proportions for the eye, it has exactly the number of steps as there are days in a year and so on. But, as you can see – it is almost the same as looking at it in a picture – you can get close to it , neither you can climb it…needless to say – I was disappointed. By coming at 9 am we escaped the big crowds brought to here by buses from Cancun, that is right, that was good. But we didn’t escape the big crafts market made from the whole site, so eventually I couldn’t see the ruins there any more, for the craftsmen took my attention completely. They lined with their goods all the paths except for one, and stood there like soldiers in sweltering heat. Some were more insisting than the others, but all had so many elaborate and colorful carvings, that I was mesmerized… 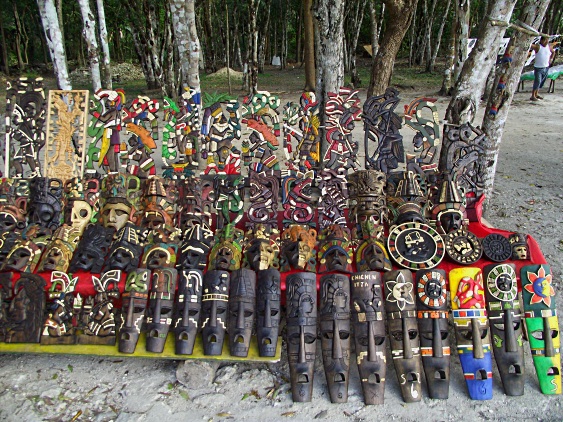 So I would try to walk towards some ruins and lift my head, but again it will go down towards the immense variety of forms and things that were lined by the paths: 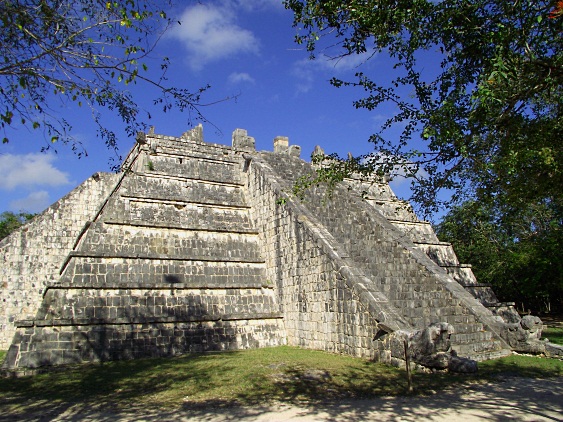 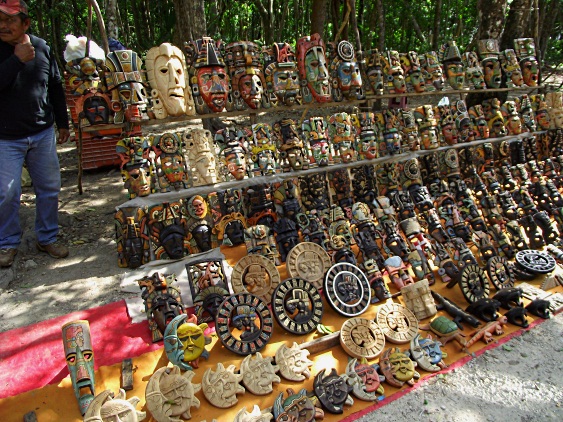 How could I resist all that. No way. You will see how I ended up. While you could touch any of those beautiful crafts. you couldn’t come even close to any of the ruins there. Only iguanas had a special permit: 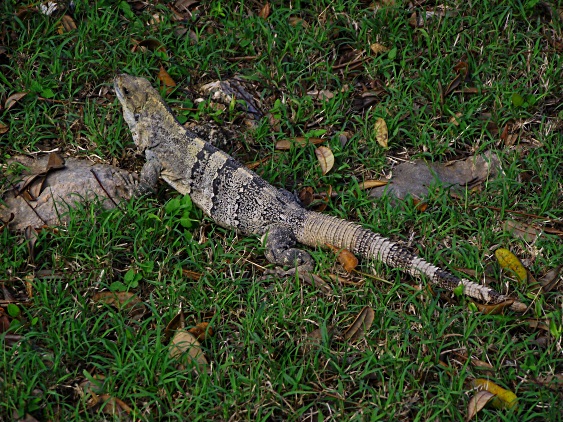 Here is the main pyramid from the back, not so well restored as its front side, I completely understand why those big crowds of gringos are no longer permitted top climb it… 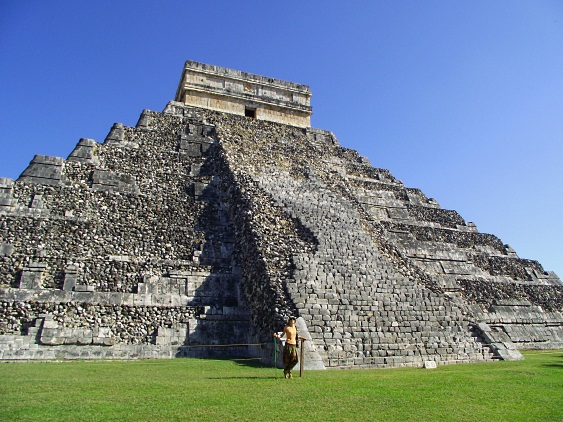 And as I saw in books – those pyramids were initially white with usually dark red edges and colorful reliefs, no more… 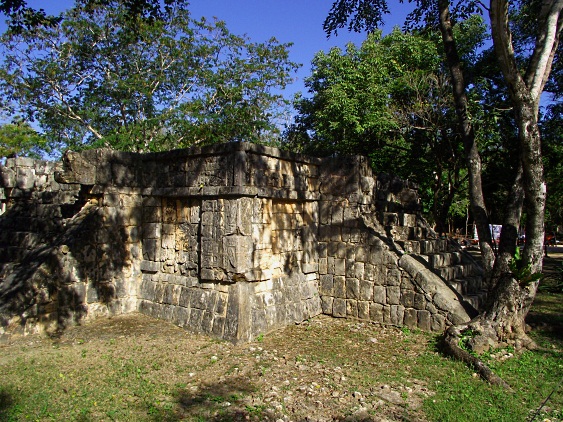 They were very well decorated, so the craftsmen were using the patterns from their decors in their carved panels, A very good place to try to sell them. I say to try – for except for me, I didn’t see anyone buying them. Lets hope I don’t notice everything that is going on. So this structure on top is a pedestal for funerals. 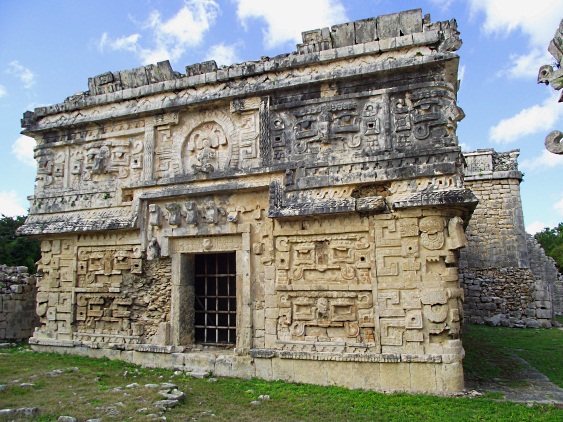 This very elaborate one – for dead bodies, too. But whether they were sacrificed or enemies or just community members, I forgot. Too much about death in those sites. Only the god decorating the walls in the Rain God Chaak. To us the air seemed humid there. But still water is a problem for it rains only at certain seasons and then in winter there may be no rain for a very long stretch of time. At least they had the special God to pray for it. 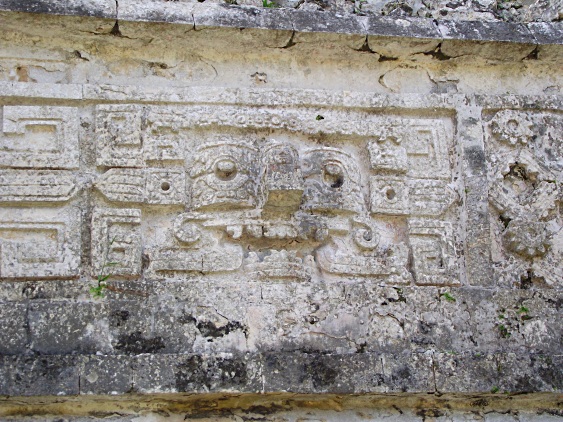 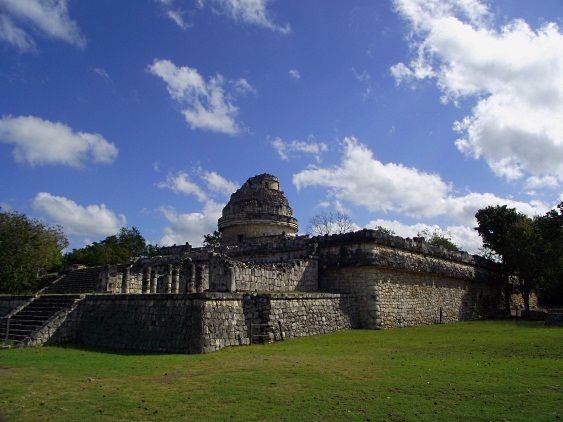 This structure above was their Observatory. But, as all the other structures – is forbidden to enter, is fenced. So only from far away… 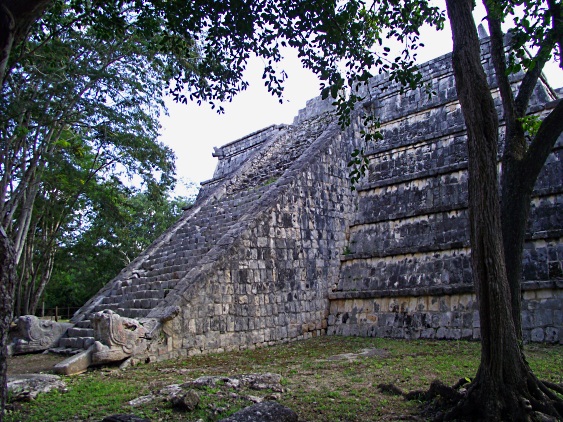 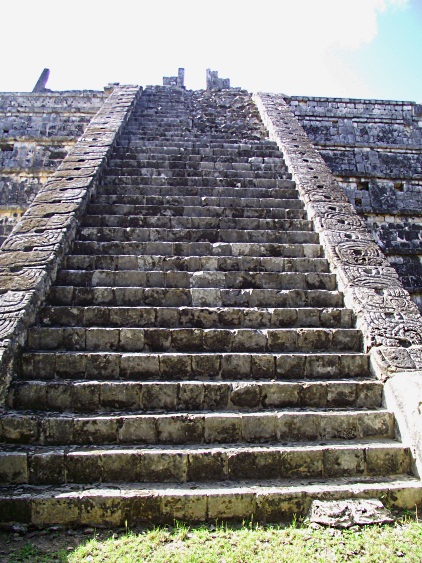 Those inviting stairs…But no way, fenced. 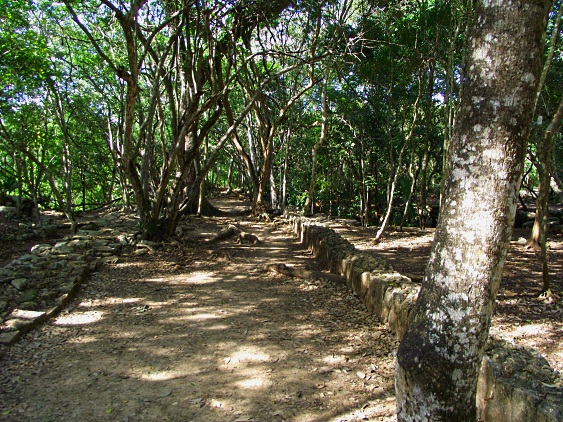 An old Maya path made of limestone, as all paths, almost white, and no sellers – the only path without them. 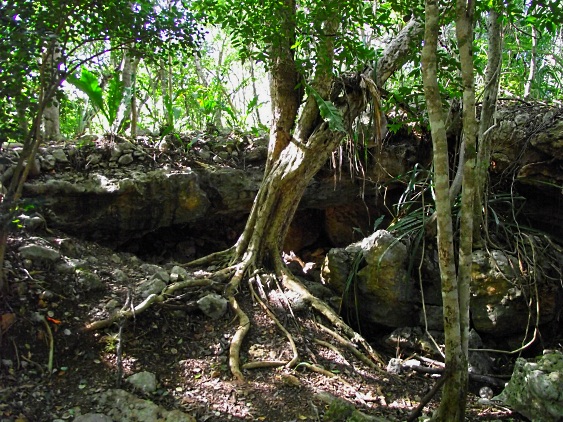 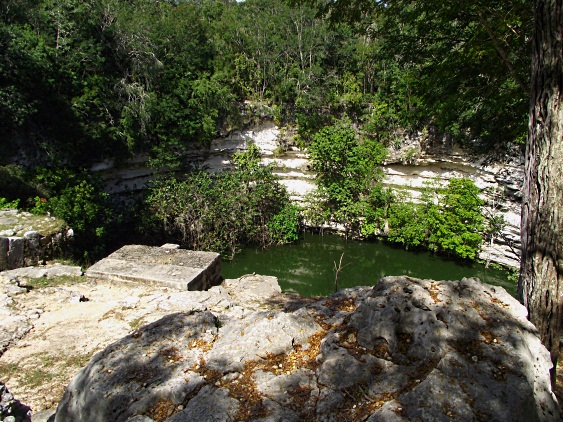 And this cenote was Sagrada – sacred. Meaning they were throwing only some little statues and trinkets into it, no bodies, and drinking its water. Those trinkets are exposed in Merida Museum of Antropology. 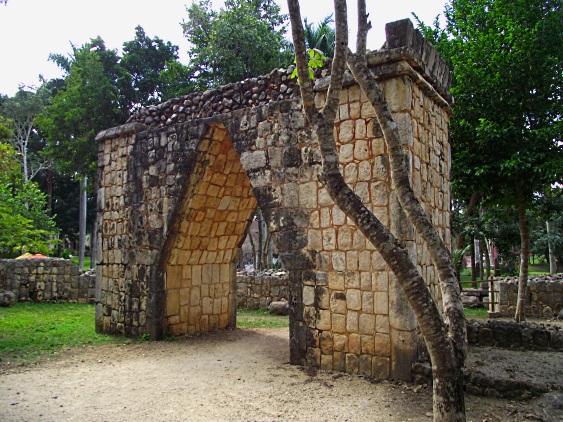 This is a typical Mayan arch – instead of making roofs they made such arches, peculiar. 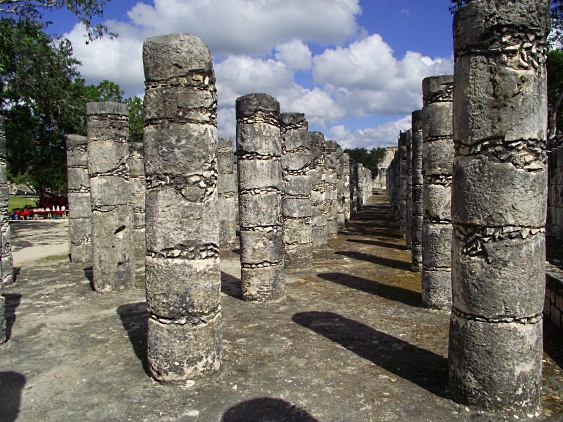 The city’s market place, a surprise to see columns. 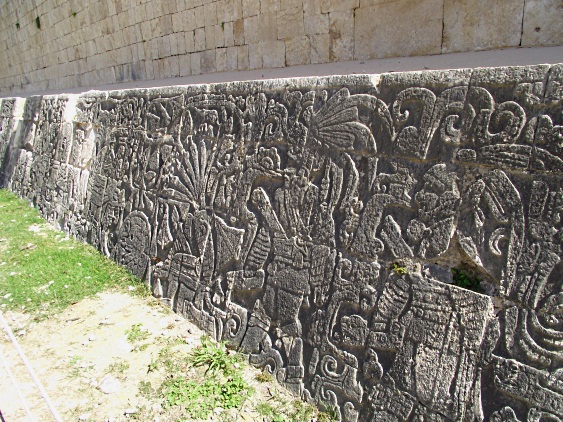 Reliefs at the Ball Court where they played some game that later developed into real football that Americans are calling Socker. 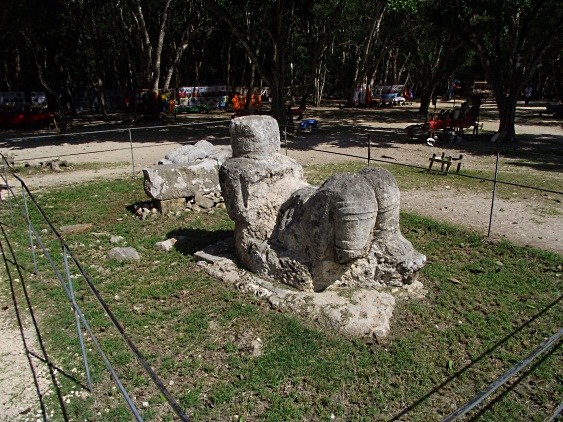 An altar for sacrifices…a very sad place for I saw in some paintings and read that they were sacrificing virgins and live people in very cruel manners i don’t even want to mention. But now Maya people seem so soft…and are so tiny: 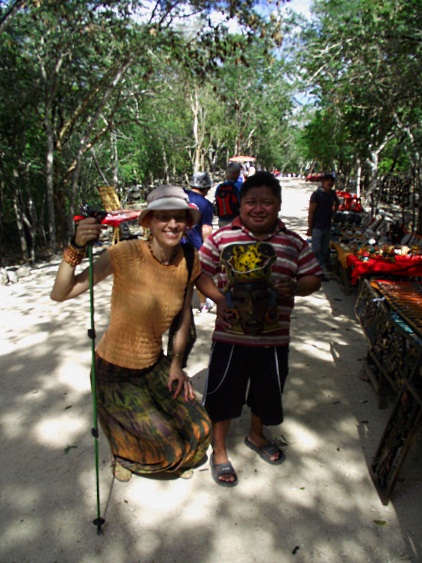 That I couldn’t stop buying from them all those crafts and ended up with 3 big carved boards and 4 masks and a drum…As I said to my parents on Skype – brought a lot of wood from there: 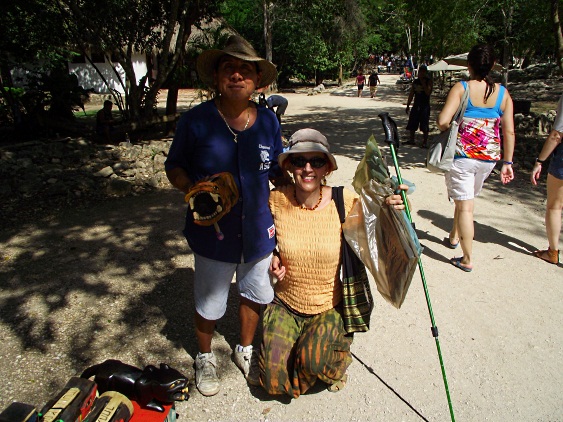 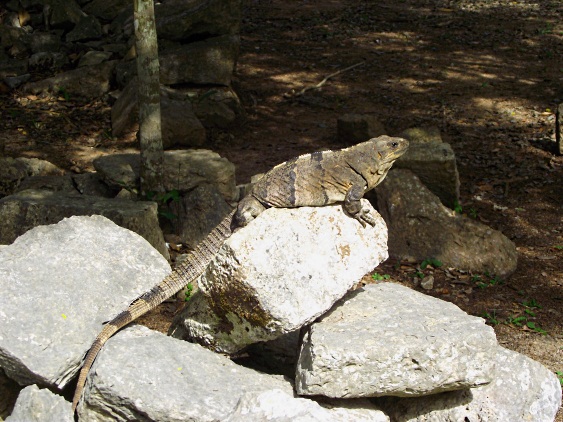