It was hard to decide what to do today…The forecast said there will be showers. After yesterday’s really big ones we were afraid not to find ourselves in a cloud again. So we took a green Link bus which goes in circle around the city and saw some of Auckland through the windows. It took us 40 min to do the circle. While sitting in the bus we were making decisions – the skies started to look clearer, so lets rent a car for a day and drive to the Kerikeri beach where they filmed the movie The Piano. But the rental offices refused to rent us a car for a day. So the only last thing we had in mind was to take a ferry to Waiheke Island which we did. It sails through Devonport, even stops there, then by Rangitoto island, some other islands and here we are – in Waiheke, which was described by some Kiwis as a really good thing to see. The length of the island is only 25 km and the width is 5 km, but it is made of green rolling hills with some trees and bushes. Some dinosaur type ferns in deeper wet crevices. As I expected – once everyone from the ferry was taken into buses or cars – the narrow road got clear and quiet and we walked some 20 min to the first town Onerua to eat. The servers screwed up our lunch, we paid for one thing, got another, etc. In any case that was not the main point. The rain started again…So we waited while eating, then walked towards the sea on the right side (I am reminding – the island has seas on both sides :-). 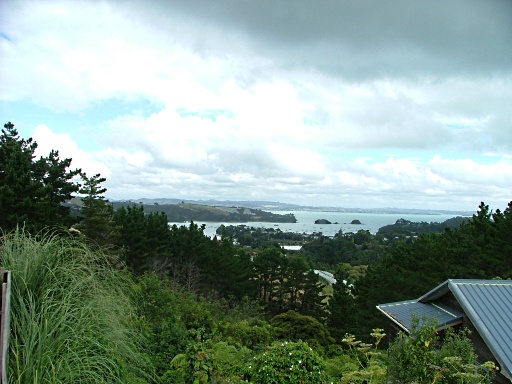 The waters were very green, no dark blue hues at all. The other shower caught us on the way – and luckily there was a bus stop. Here they build bus stops with roofs and sides – so we sat there for half an hour, a Swiss girl on a bicycle came all wet and we talked with her. She came to Auckland for 6 weeks to learn some English and she said she is very old…already 31 years old…After the rain stopped we reached the shallow beach and walked around a steep edge of the island and towards the other side – towards the praised Palms beach. There were fancy houses by the sea – very modern to my eyes. 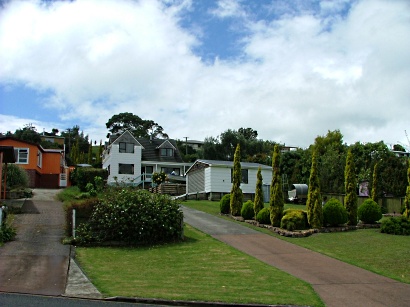 One had an extremely big chair in the yard – a chez long – as a sculpture, I guess. Or maybe they sit in it if they have a group of guests. The walk was nice, there are benches along the road to sit and rest, and we had to climb quite a bit to reach the very top of the mountain. The road was winding till we got down again to the Palm beach. It was beautiful. The sand was not white, but there were waves and the green waters were warm enough to play in them. On the whole the air and water temperatures here are so comfortable here for a feel! I can’t stop appreciating it. 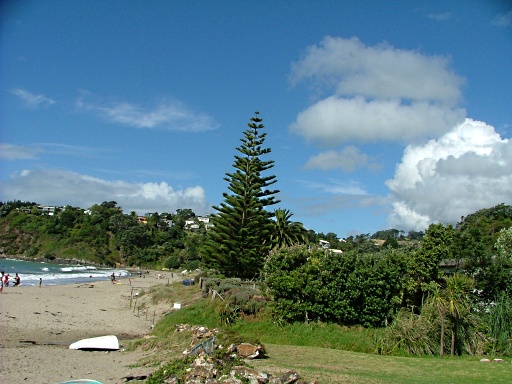 This is how locals love dogs: 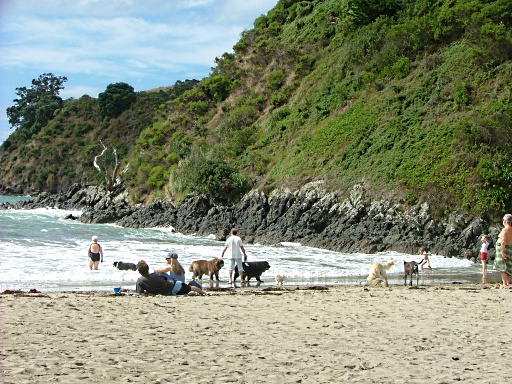 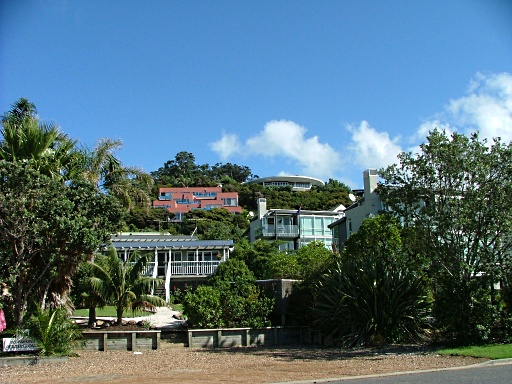 I guess we walked around 8-9 km from ferry to Palm beach – it was like a hike and a pleasant one – I could observe plants and flowers by the houses. The had some unripe peaches, though not the planted ones in a tidy orchard but the wild ones growing in a jungle environment. Nobody there seemed to be interested in gardening.

While waiting for a bus to get back to the ferry – i saw a tiny gallery and had a pleasure of seeing some local talents’ paintings.

This is how Auckland looked while approaching it from the sea: 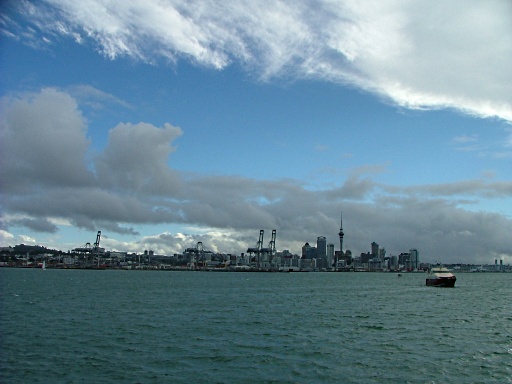