This spring guests showed me a nest that the lady hummingbird has built on the right edge of our B&B sign right in front of the main doors. It was the beginning of May. Soon she lay two tiny eggs and sat on them for three weeks: 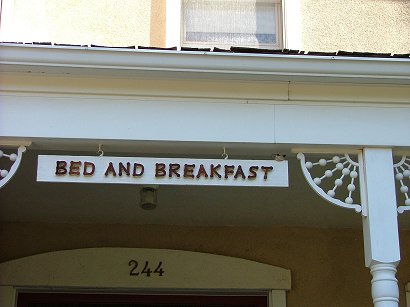 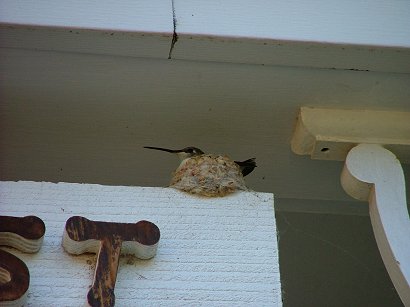 How did we know that there were two eggs – I climbed a stool and put a mirror on top of the nest to peek into, while the hummingbird mom was gone to eat some. While she sat – her nest and the surroundings were clean. Not so after when the super tiny chicks appeared :-): 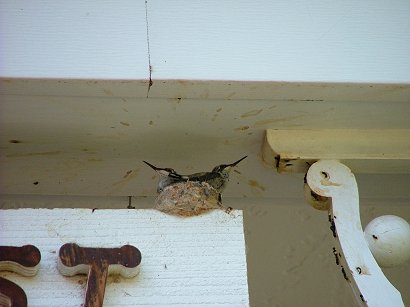 Actually it took again three weeks for them to grow to this size seen in the picture, train their wings and fly away. For the first ten days you could see nothing in the nest, just the mother coming and feeding them now and then. When I looked with the mirror – I saw two breathing featherless bodies with three downs each, without distinguishing where their beaks or butts were. Then the vertical beaks started to appear: 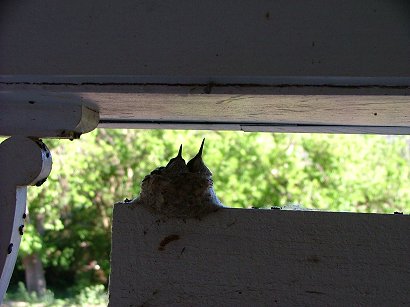 And then one day we notice that there is only one bird still in the nest, the other is gone. The second one was hesitant to fly out, he still sat on the edge of his nest and trained his wings which to my eyes seemed too small for flying…the first fly ended in a bush close by: 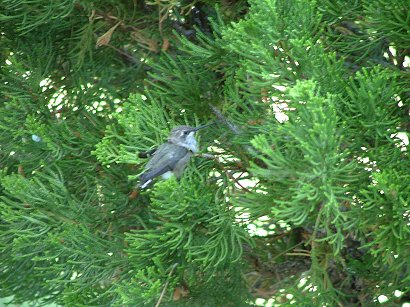 And then another bush: 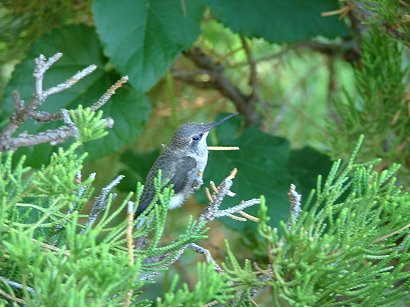 and then the tiny bird disappeared in the big pine tree. You could only wish them the best. So may have them are killed by predators. But the ones who make it – they live up to 18 years, a real record for such a small creature which has his heart beat at times he flies with an enormous speed.

Interesting as it is we had two families this summer in that same nest. The other one was a different mom for she was much more intimidated by passers by. The fathers don’t play any role in sitting on eggs or raising the family – that fact I read in the internet and i never saw a brighter bird there (males are usually more colorful).